The Royals ended their season the same way they started it by defeating their district rivals. 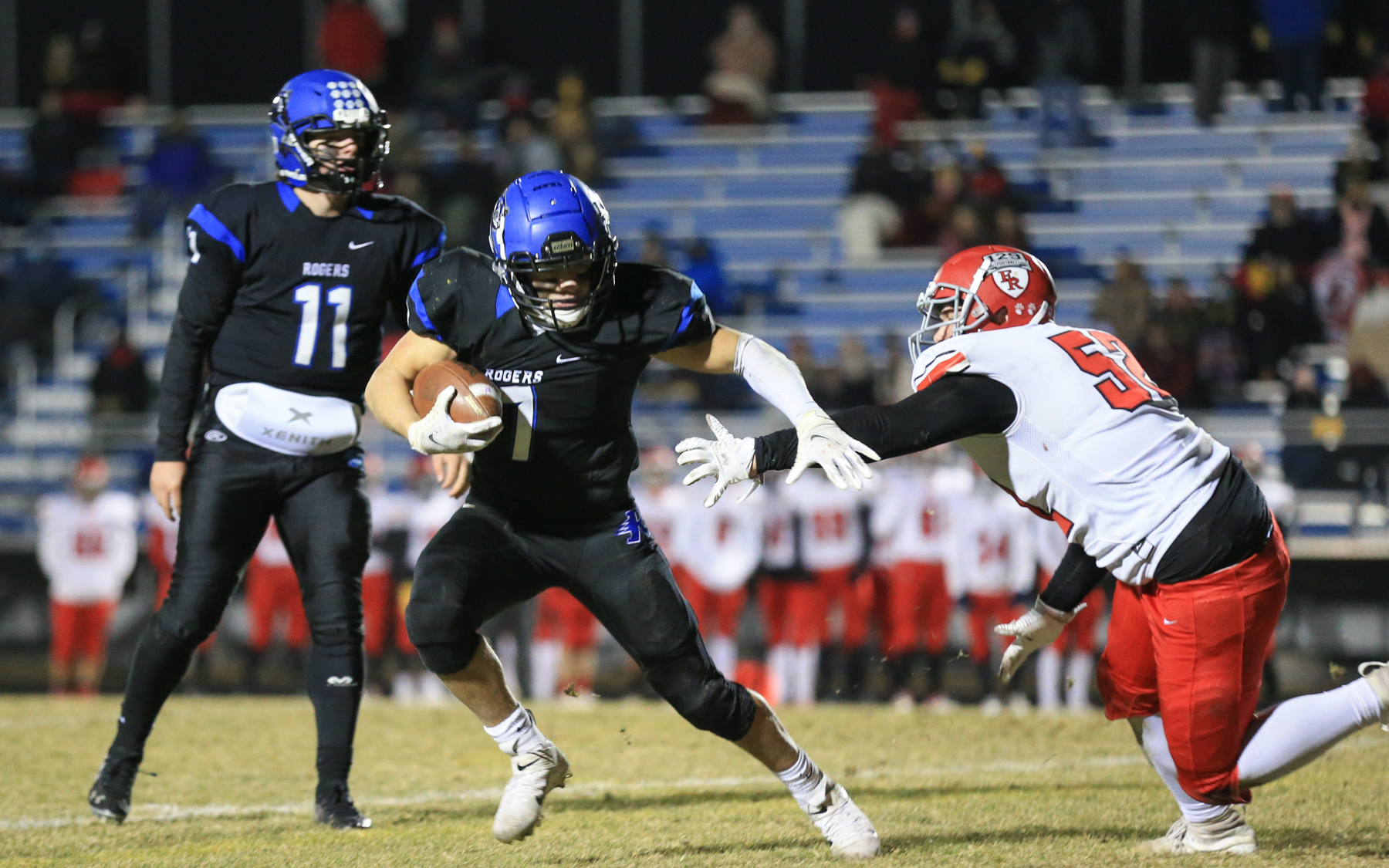 Rogers’ Ben Dahl (7) eludes Elk River's Cooper Oudekerk (52) on a run near the goal line Friday night. Dahl had a rushing TD in the Royals’ 28-20 victory over the Elks. Photo by Jeff Lawler, SportsEngine

Rogers coach Marc Franz was standing, watching a freshman football game as a spectator in 2016 when he saw a young running back burst into the line. Franz promptly turned to the person next to him.

“Well that kid,” Franz said, “is a football player.”

Franz knew Dahl, who lives a few doors down, for years before that play. Franz just didn’t know he could run like that.

Fast forward four years to Friday, when Dahl capped his Royals’ career in front of Franz the way he started it in helping Rogers to a 28-20 victory over Elk River in the Class 5A, Section 6 championship.

Dahl showed that acceleration and drive when he rushed for a 1-yard score, giving Rogers a 21-14 lead — its first of the game — in the third quarter. And the Royals never trailed again.

“[Dahl] just hits hard,” Franz said. “I just love the kid as a football player, love him as a neighbor. We’re going to miss him next year.”

Minnesota imposed a four-week shutdown on youth sports effective Saturday, which prompted a quick re-shuffling of the section schedule so that No. 1 seed Rogers and No. 2 Elk River could play for the title.

“Marc and I talked before the game and said it was just really cool they got to end playing each other,” Elks coach Steve Hamilton said.

Each side knows the other well, and they’re no strangers to close games. The overall series since 2011 is now tied 6-6, and the point differential is only 346-336 in favor of Elk River. Rogers won the first matchup this year, 28-12, in the first game of the shortened season.

“I don’t think it could have been any more perfect,” Dahl said. “We’re getting a new field, so this is the last game ever played on this field, a home game against our rivals. Couldn’t have been any better.”

Especially with the way things went for the Royals, who got every score from a senior.

One of those seniors, quarterback Zac Evenson, contributed to two. He ran for a touchdown to tie the game at 14 before halftime, then later threw a clutch fourth-quarter touchdown.

On fourth and nine from the Elks’ 29, Evenson aimed for senior receiver Logan O’Neil running toward the end zone. O’Neil couldn’t make the initial grab, but as he fell down, the ball bounced in the air. Then he snatched it, extending the Rogers lead to 28-14.

“Sometimes you’ve got to take shots like that,” Franz said. “We got a friendly bounce and Logan had outstanding concentration.” 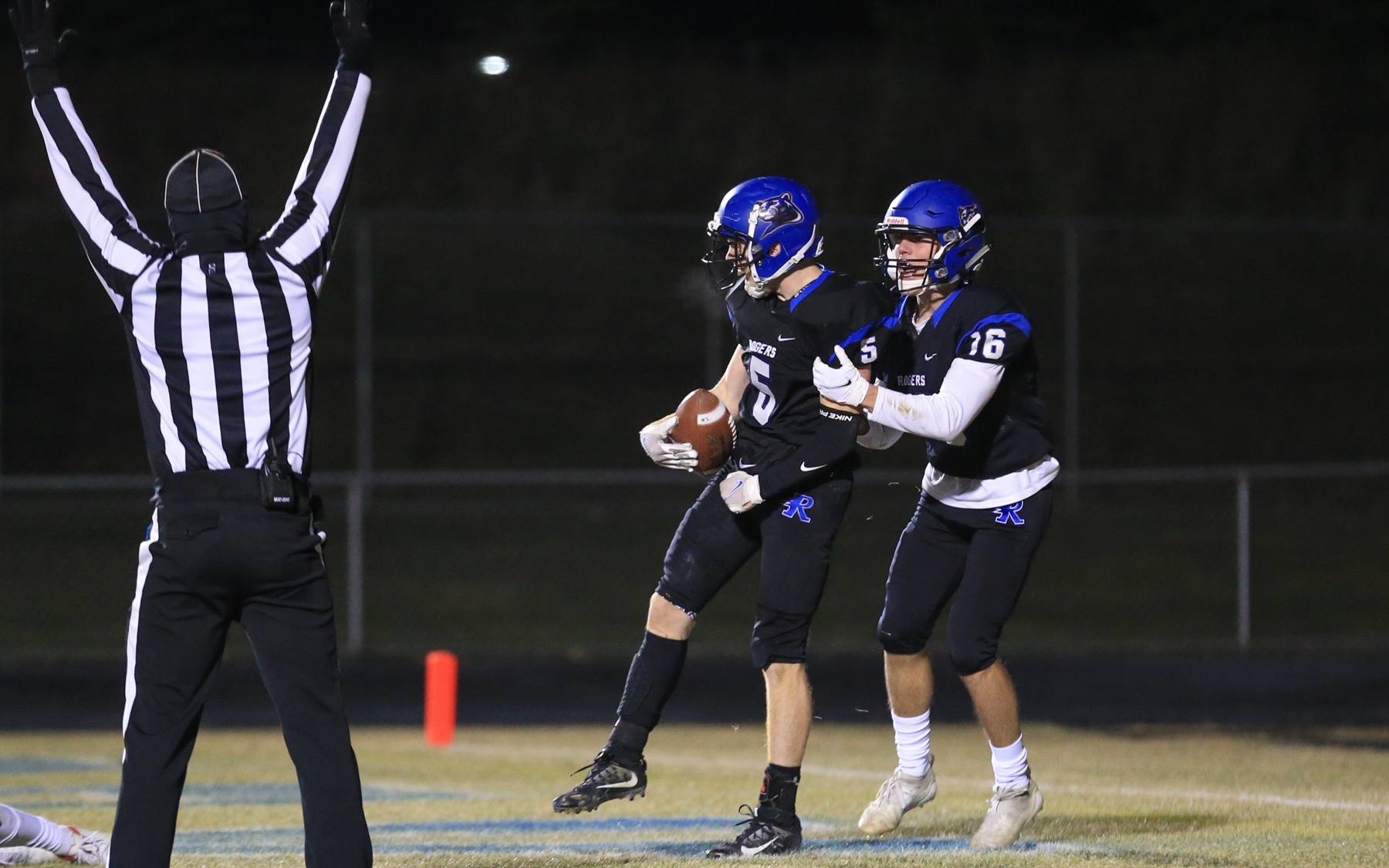 Rogers started the delayed 2020 football season with a victory over Elk River and finished it the same way.

The Royals' 28-20 victory on Friday came in a game that featured the top two seeds in Class 5A, Section 6.

When a state-imposed four-week shutdown on youth sports effective Saturday made next week's championship game a nonstarter, the section was reconfigured to have the top-seeded Royals play host to the second-seeded Elks on Friday. 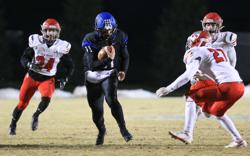 Trailing 14-7 in the second quarter, Rogers scored three unanswered touchdowns through the middle of the game. Quarterback Zach Evenson rushed 4 yards for the first one late in the second quarter. He connected with Logan O'Neill on a 29-yard scoring pass in the fourth quarter.

Elks running back Carter Otto ran for two touchdowns, a 1-yard run in the first quarter and a 4-yard score in the fourth.

Coming into Friday's game, Rogers and Elk River had faced each other 11 times over the past decade. The Elks had a 6-5 edge in victories, with a score differential of just 326-308.

The Royals won the season opener 28-12 this year. 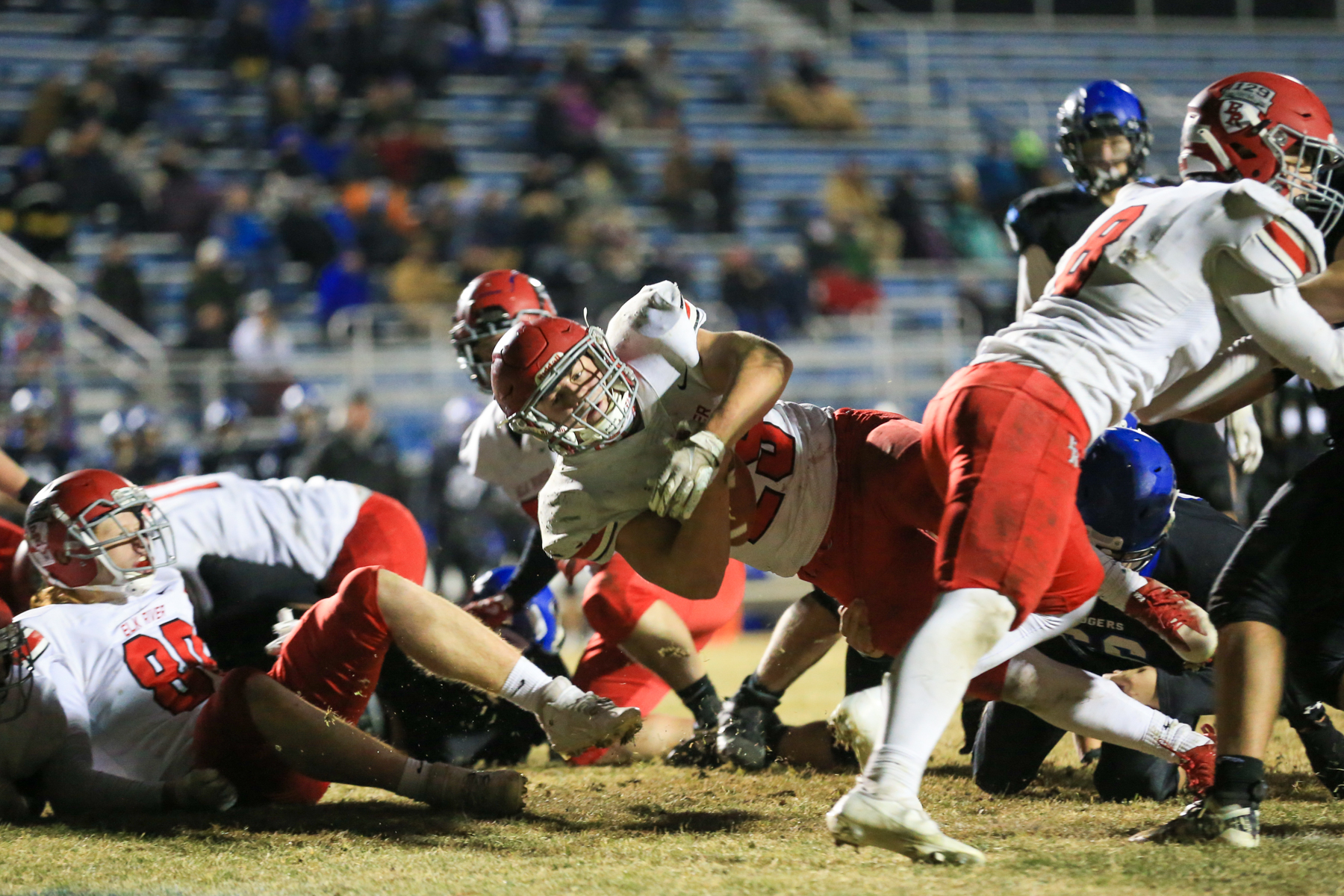 Elk River's Carter Otto (25) dives into the end zone for a fourth quarter touchdown against Rogers Friday night. The Elks fell to the Royals 28-20 in Rogers. Photo by Jeff Lawler, SportsEngine