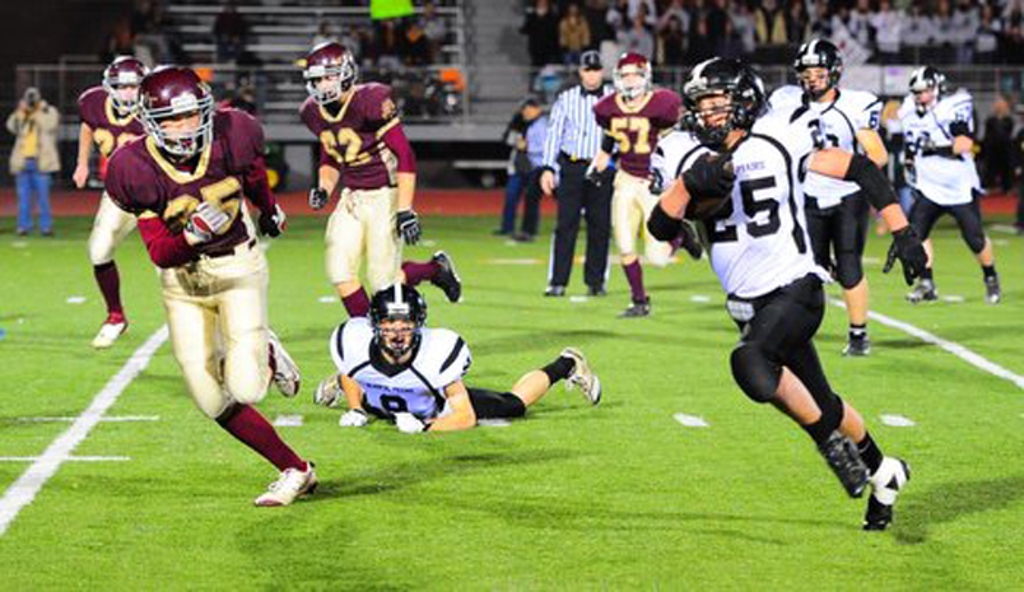 Blooming Prairie running back John Kraling tries to turn the corner against the Lester Prairie/Holy Trinity defense Friday, Nov. 11, 2011, during the quarterfinals of the state tournament at Macalester College in St. Paul. Submitted photo

In a game where victory almost slipped from the hands of the victor, it came down to one final coach’s decision to end the back-and-forth battle to see which team would make it to the Metrodome.

Sporting a 35-28 lead with minutes to go in the game, the Blooming Prairie Awesome Blossoms gave up a late touchdown to the Lester Prairie/Holy Trinity Bulldogs. It was the decision by the Bulldogs coach to go for the two point conversion that may have handed the Awesome Blossoms their trip to state.

Zellmer has also been plagued by some minor, but nagging, injuries throughout the season that showed no sign of slowing his race for the state record. Beginning with a broken thumb, Zellmer has been nursing some problems with his throwing arm.

And his team was counting on him to be pretty darn good.

As if he’d eaten a piece of humble pie, Zellmer praised his receivers before taking any credit for himself.

“I got the ball to the playmakers--that’s probably the main thing,” said Zellmer. “We have great receiving. We just have to get it out there in their hands.”

But, there are no trips to the playoffs presented on a silver platter—the Awesome Blossoms clawed and scratched their way to the final buzzer.

After scoring a breathtaking Hail Mary touchdown during the second quarter, the Bulldogs started their climb back into the game. By half time, the team had closed the gap to 28-21. But, Zellmer and the Blossoms weren’t going to roll over so easily. Adding a touchdown in the second quarter put the nail in the coffin on the Bulldog’s season, which was just enough to carry them past the 13 points scored by the Bulldogs in their final valiant push during the fouth quarter.

Despite securing a place in the state tournament, coach Gimbel knows that now is the time for his team to relish the victory, but also to look for any weakness in his team if they are going to move forward.

“We're going to get the defense shored up a little bit—that’s going to be number one,” said Gimbel. “We had some injuries and had to do some moving around. But, the biggest thing was our other guys didn’t step in and know their role, and that’s huge this time of year whether or not you have injuries.”

With the game on the line late in the fourth quarter, the Lester Prairie/Holy Trinity Bulldogs were on fire. They had just scored a touchdown and closed the gap between them and a state semifinals birth to one point. All they had left was a choice.

One point for the tie, or two points for the win?

As the Bulldogs lined up to take the crucial snap, they set themselves in a swinging-gate style formation. This meant that their center and sophomore quarterback Alex Heigl were lined up in the middle of the field with a wide out to their right and everybody else lined up to their left on the far sidelines, including their offensive lineman.

The rare formation was explained by Scoblic after the game.

“It gives us a lot of options,” he said. “We can snap it wide if the numbers are right and it gives Alex [Heigl] a lot of opportunity to keep the ball or pass the ball. A lot of good things can happen for us. “

Heigl decided to keep the ball. He took the draw and sprinted out the right, dashing parallel to defenders as they closed in on him near the pylon.

Unfortunately for Heigl and his teammates, the Awesome Blossom defense never let him touch that pylon off the swinging gate, and the score held at 35-34.

After the game, Heigl was understandably heartbroken.

“We worked so hard. It sucks that it’s all over,” he said. “We played a hell of a game, I’m proud of everyone.”

Heigl may give well deserved credit to his teammates, but the singlehanded effort he put in was phenomenal. He threw for two touchdowns, ran for two more, and scooped a fumble and had a key interception in the fourth quarter that led to the Bulldog’s last touchdown while playing as a safety.

“Alex is a great leader,” wide receiver Nick Machemehl said. “Ever since fourth grade we’ve been playing football together. He’s always been our leader, and he’s always been a role model to every one of us.”

Machemehl and Heigl constantly connected on the field on Friday as they had done so all year and since both Heigl and Machemehl are only sophomores, the future of the Lester Prairie / Holy Trinity program is extremely bright. With even more time and practice together, the duo will be absolutely fearsome next season.

“No regrets with this team, I love all those guys,” Heigl said. “My only regret is that we lost. We’ll come back next year strong.”

Behind the golden arm of quarterback Luc Zellmer, the Blooming Prairie Awesome Blossoms punched their ticket to the state semifinals in a thrilling 35-34 victory over Lester Prairie/Holy Trinity on Friday, Nov. 11, 2011, at Macalaster College in a state quarterfinals matchup.

Although the Awesome Blossoms dominated the early portion of the game, Lester Prairie/Holy Trinity rallied back late in the game.

In the waning moments of the fourth quarter, Blooming Prairie came up with a marvelous defensive stand against the Bulldogs during a two point conversion attempt to keep their lead at 35-34, sealing the game.

Leading up to that point, the rest of the game was a battle of quarterbacks, which was dominated by Blooming Prairie's Luc Zellmer.

The senior quarterback threw for four touchdown passes, including two quick strikes to set the tone in the first quarter as the Awesome Blossoms took an early 14-0 lead.

Sophomore Alex Heigl of Lester Prairie/Holy Trinity fought back, however, answering early in the second quarter with a 5-yard scoot into the end zone.

Throughout the second quarter the two teams traded touchdowns and big plays.

Blooming Prairie kept tacking on score after score but somehow the Bulldogs continued to get back up after getting knocked down.

With no time on the clock at the end of the first half, Heigl sent a jolt into his team when he rolled out to his left and found a wide open Ryan Quast. Quast caught Heigl’s pass and the Bulldogs pulled within 7 at 28-21.

The shootout of a game slowed down in the second half but the Awesome Blossoms defense stood tall when it mattered most.

Blooming Prairie advances to the state semifinals at the Metrodome in Minneapolis. The Awesome Blossoms will face the winner of the Saturday's quarterfinal matchup between Warren-Alvarado-Olso and Dawson-Boyd.

2. Alex Heigl, Lester, Prairie/Holy Trinity
if the Bulldogs win, Heigl is the No. 1 star of this game. Passing, running, kicking, defense, Heigl did everything he could to help his team advance to the Metrodome. He accounted for four of the Bulldogs five scores. Heigl had rushing touchdowns from 5 and 6 yards out and two passing scores from 23 and 39 yards. He connected with Ryan Quast as the second quarter came to a close, showing off his athletic ability by escaping the rush and buying time for Quast to get open. The future looks bright for the Bulldogs, as Heigl is only sophomore.

3.Gabe Kartes, Blooming Prairie
Kartes was the main target for Luc Zellmer all night long. He had two receiving touchdowns from 38 and 1 yard. His 1-yard score was the eventual game-winner as the Bulldogs failed on a two-point conversion to take their first lead of the game late in the fourth quarter. Kartes was also a force in the rushing attack. He iced the game with a key first down run with less than two minutes to go in the game.