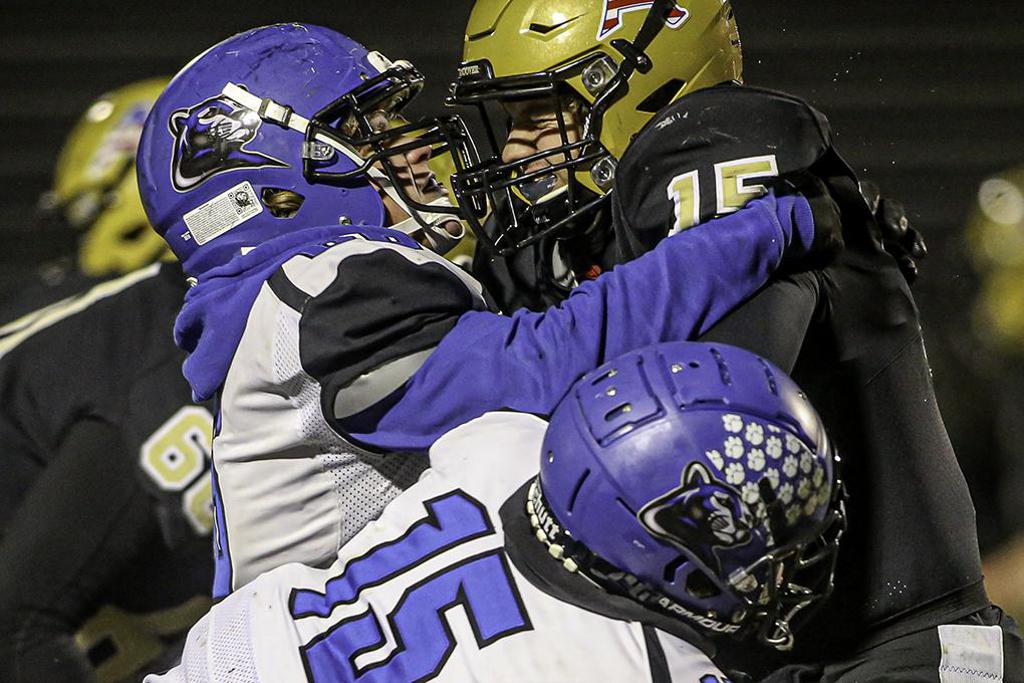 Rogers defensive lineman Ross Meskimen (left) and Andover quarterback Connor Develice met face to face on a third-quarter run. Develice was injured on the play and did not return to the game. Photo by Mark Hvidsten, SportsEngine

The Huskies completed the season with a 6-0 record and, in doing so, managed to flip the result of four games from a year ago.

“Phase 1 of our plan was to beat the teams that beat us last year,” Develice said. “We did that. Well, if we beat Coon Rapids, we’ll have beaten all five of them.”
The other four being Bemidji, Elk River, Buffalo and Rogers. 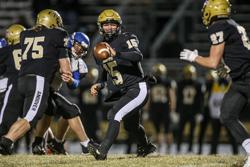 The players said Friday’s victory was just a little more special because the quality of the opponent. Andover was ranked No. 4 in Class 5A going into the game, Rogers No. 6.

“We go into every game thinking that team is the best we’re going to play, but realistically, Rogers was the best team we played,” senior Elijah Alexander said.

The 6-4, 190-pound Alexander was the Huskies quarterback last season, but was moved to receiver with the rise of junior Connor Develice, the coach’s son, to the starting role.

Alexander embraced the change. “Like the coach said, we’re going to put the best people on the field that we need to win,” he said. “With Connor on the roll that he is, I don’t blame him.”

Connor Develice, a junior in his first year as a starter, has been a key for the Huskies this season. He passed for 185 yards and three touchdowns against Rogers, despite not completing a pass in the cold, blustery conditions until late in the first quarter.

He heated up in the second quarter, throwing two touchdown passes, the last one perfectly lofted to receiver Sam Musungu for a 23-yard score on fourth-and-goal on what turned out to be the last play of the first half. It sapped Rogers’ momentum. Instead of leading at halftime, the Royals trailed 14-10.

“That score just before the half was a huge play for them,” Rogers coach Marc Franz said. “Especially since we had them backed up on fourth down. That hurt.”

Develice threw third touchdown pass, this one in the third quarter, to Alexander. When the quarterback suffered a leg injury later in the quarter that forced him from the game, Alexander came in to replace him.

"Going out the cold like this, it was definitely a shocker, but I’ve been there before,” he said.

While Andover got its passing game going despite the weather, the Huskies’ defense kept Rogers’ balanced, two-quarterback offense at bay. They forced Rogers out of its comfort zone and picked off four passes, never letting the Royals establish consistency on offense.

“That’s how our defense has been for us,” coach Develice said. “They’ve been our stronghold all year long.”

Andover (6-0) has just one game left in its season after COVID-19 concerns forced two teams in its section to cancel the rest of their seasons. The Huskies will play in the Section 7 championship game on Nov. 25 against either Cambridge-Isanti or Coon Rapids.

“We want to be section champs,” Tom Develice said. “That would be Phase 2. We’ll be happy with that because won’t the chance to get to Phase 3.” 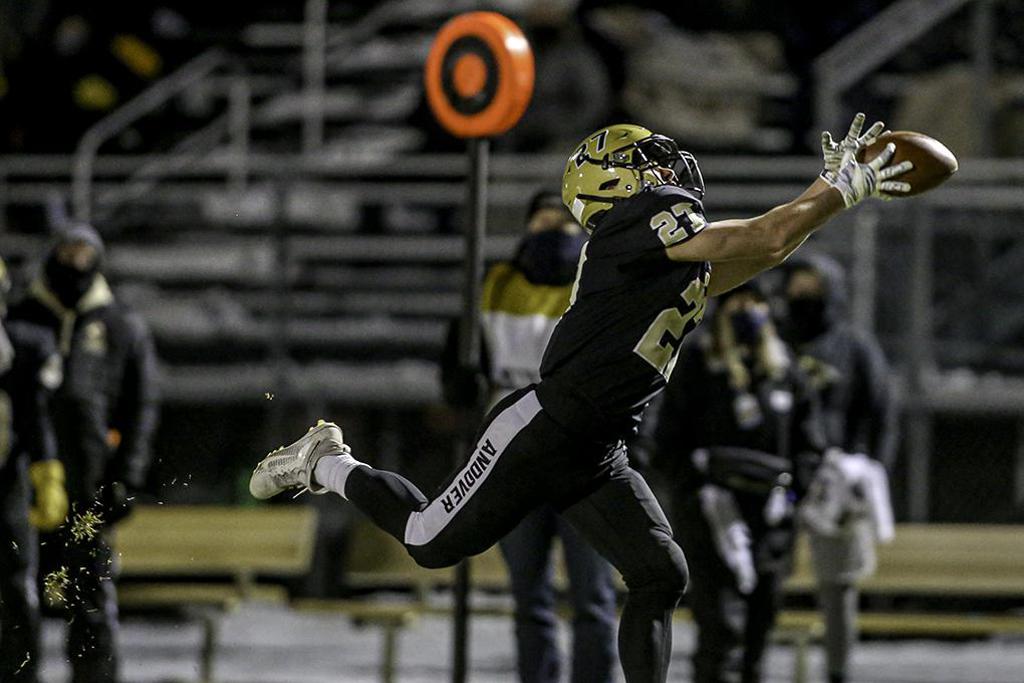 Andover running back Caden Wheeler hauls in a long pass from Connor Develice to set up the Huskies’ first touchdown against Rogers. Andover led 14-10 at the half. Photo by Mark Hvidsten, SportsEngine

Quarterback Connor Develice threw three touchdown passes to lead Class 5A, No. 4 Andover to a 27-17 victory over Rogers.

The Huskies, playing at home, took the lead for good Friday on the last play of the first half when receiver Sam Musungu caught a 23-yard pass from Develice, giving Andover a 14-10 lead.

After a scoreless first quarter, Rogers, ranked sixth in Class 5A, opened the scoring with a 22-yard field goal by  Dylan Honnoll to take a 3-0 lead.

Andover (6-0) responded with a 4-yard scoring pass from Develice to Aghogho Eyafe to take a 7-3 lead.

Rogers regained the lead on a 17-yard touchdown run by quarterback Evenson before Develice and Musungu connected on their scoring play as time expired to end the second quarter.

Develice’s third touchdown pass was a 5-yard toss to Elijah Alexander in the third quarter to extend the lead to 21-10. Running back Caden Wheeler rushed for a 16-yard touchdown with 10 minutes, 16 seconds left in the fourth quarter to build a 27-10 lead.

Rogers narrowed the margin to 27-17 on a 2-yard rushing touchdown by Ben Dahl.

Rogers, which fell to 4-2, was hampered by five turnovers.

When postseason play begins next Tuesday, both teams will have No. 1 seeds in their sections and neither will be playing, owing in part to absences wrought by the COVID-19 pandemic.

Andover is the top seed in Class 5A, Section 7. Only two other schools in the section -- Cambridge-Isanti and Coon Rapids -- are still playing football after COVID issues sidelined Duluth East and St. Francis.

As a result, the Huskies advance to the section championship game on Nov. 25. They will host the winner of a game next Thursday between third-seeded Coon Rapids and No. 2 seed Cambridge-Isanti.

Rogers, the No. 1 seed in Class 5A, Section 6, will next play Nov. 21 in the section semifinals against the winner of Monticello and St. Cloud Tech, which play Tuesday.