Senior quarterback Ryan Miles completed five touchdown passes, guiding the Spartans past the Wolfpack in the regular-season finale for both teams. 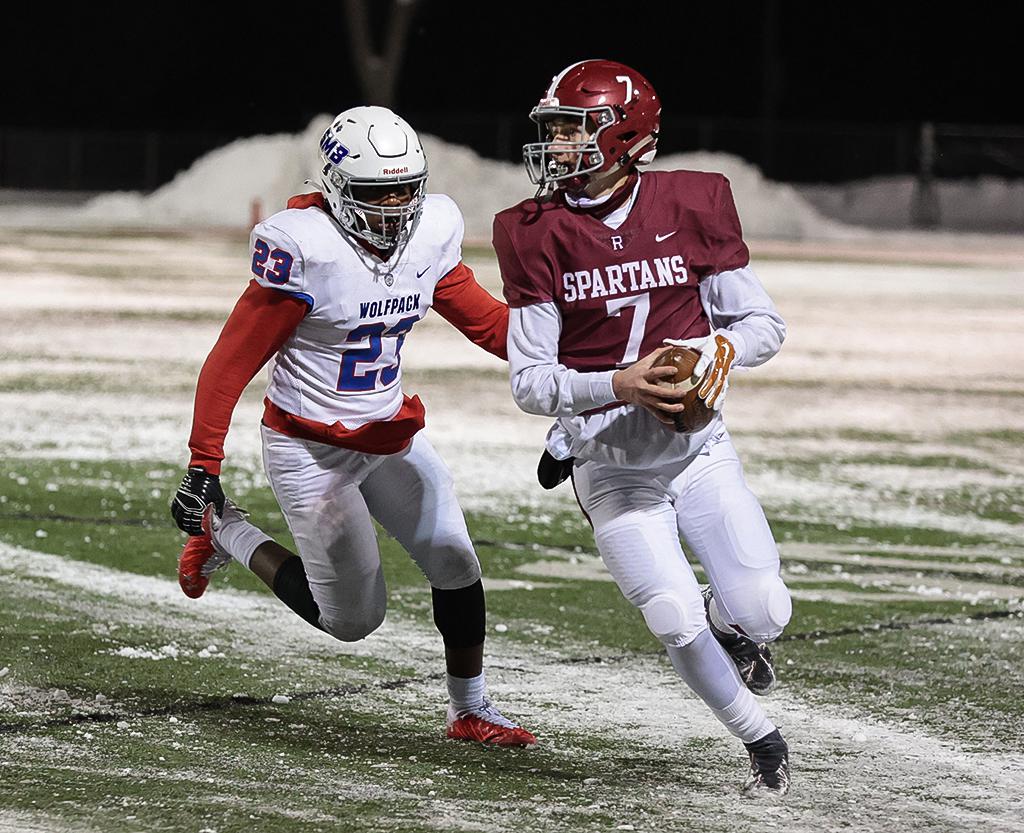 Quarterback Ryan Miles (7) looks for a receiver while evading an SMB defender. Miles threw five touchdown passes in a 42-28 win at Richfield High School on Thursday night. Photo by Cheryl A. Myers, SportsEngine 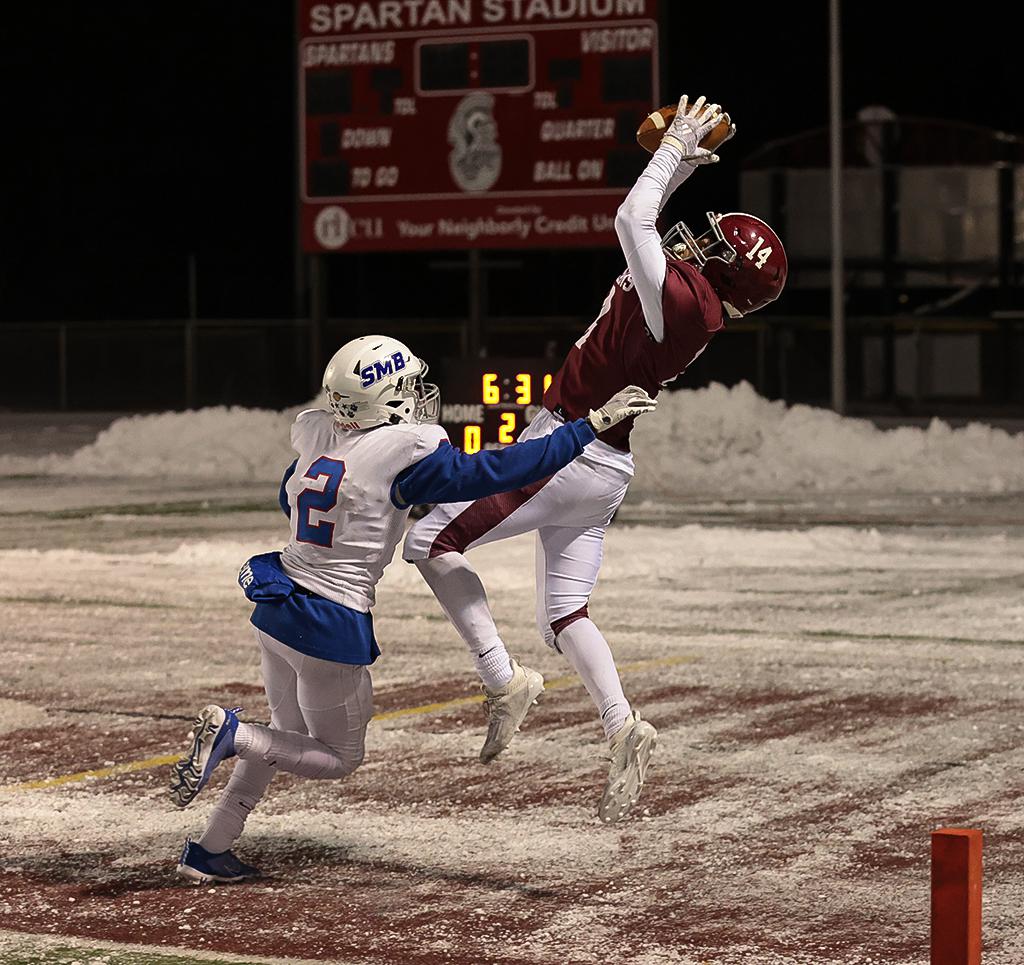 Junior wide receiver Mitchell January (14) scored twice, helping the Spartans tally 42 unanswered points to come back from a 21-point deficit to defeat the Wolfpack. Photo by Cheryl A. Myers, SportsEngine

It seemed like January in November for Richfield, but temperatures in the low 20s and icy snow covering part of Richfield’s artificial turf didn’t stop the Spartans from mounting an aerial assault.

SMB got three touchdown passes from junior quarterback Judah Thomas, who connected with three different receivers to give the Wolfpack 21-0 lead early in the second quarter. A repeat of SMB’s 48-0 defeat of Richfield a year ago looked possible, even if it was getting it done opposite the run-heavy style that produces over 200 rush yards per game.

Drops haunted Richfield (3-3, 2-3) in a 42-7 loss on Nov. 6 at Minneapolis Southwest and they were present again for the Spartans early against the Wolfpack. 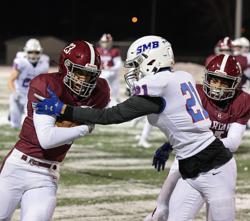 “We started off petty slow, actually. We were dropping passes, I was missing some and blocking wasn’t as good as what we wanted,” Miles said. “When we started moving, and got warmed up a bit, it just started kicking in and we could do what we do.”

Doing what they do involved keeping the Wolfpack defense off balance. Miles completed 23 of 47 passes for 409 yards and five TDs, but it couldn’t have happened without senior running back Tritian Zornes. He had 23 carries for 171 yards and a touchdown, and caught six balls for 97 yards and two TDs.

Zornes was his team’s entire rushing attack, as all other Spartans teamed for just 3 yards on 10 carries.

“[Zornes is] probably our all-around best player with what he does on defense, too,” Miles said. “He’s not scared to hit anybody with any weather.”

January, meanwhile, hauled in 12 catches for 194 yards and two TDs, and came close on a pair of near-touchdown completions, which were ruled a non-catch or called back for pass interference in the first half. His sure-handedness and athleticism put the Wolfpack (3-3, 3-2) on their heels as Richfield pulled off a stunning 42-0 come-from-behind run in less than three quarters of play.

The streak ended when a prevent defense ceded a Thomas 10-yard scramble to paydirt. The Wolfpack perfectly executed an onside kick recovered just past 10 yards by the kicker.

SMB’s rally fell short, however, inside Spartans’ territory when Henry Schaefer picked off his second pass of the night in the game’s closing seconds.

Thomas finished 16-for-41 for 269 yards and three touchdowns.

Pulford motivated his team when they were trailing by urging them about the type of story they could tell their friends for years to come from this game.

The Spartans wrote a storybook ending for a program on the rise. With just section playoffs remaining, Richfield finished the regular season with a .500 record and the Spartans look forward to the postseason.

Several football players were on the 2019-20 boys’ basketball team that won the Class 3A, Section 3 section title. Pulford and the community are opening their arms to the shift that’s occurring within the school’s athletic culture.

“Richfield is a great community. I live, teach and work here and I love being around it,” said Pulford, a 2004 Richfield graduate who played collegiately at Bethel College. “People love to support us. You couldn’t see it in the stands because of the COVID stuff, but they love supporting our guys. They do it financially, they do it in the community, they do it in the classroom and they do it out here on the field.”

A 42-0 run fueled Richfield to one of its biggest victories in years. Senior quarterback Ryan Miles completed five touchdown passes, helping Richfield erase a 21-0 deficit in a 42-28 triumph over SMB, a co-op of St. Paul Academy, Minnehaha Academy and Blake, at Richfield High School on Thursday night.

Despite temperatures in the low 20s, and an artificial turf field partially covered in snow, both clubs were committed to a passing attack in what was the regular-season finale for both schools.

SMB (3-3, 3-2) was more proficient with its passing game in the first half. The Wolfpack stormed out to a 21-0 lead, highlighted by a 79-yard TD pass from Judah Thomas to Sanjay Redd to make it 7-0 midway through the first quarter.

Miles connected with each of Mitchell January and Zornes twice for TDs during the Spartans’ 42-0 run.

Richfield took the lead for good with 3 minutes, 13 seconds left in the third quarter. 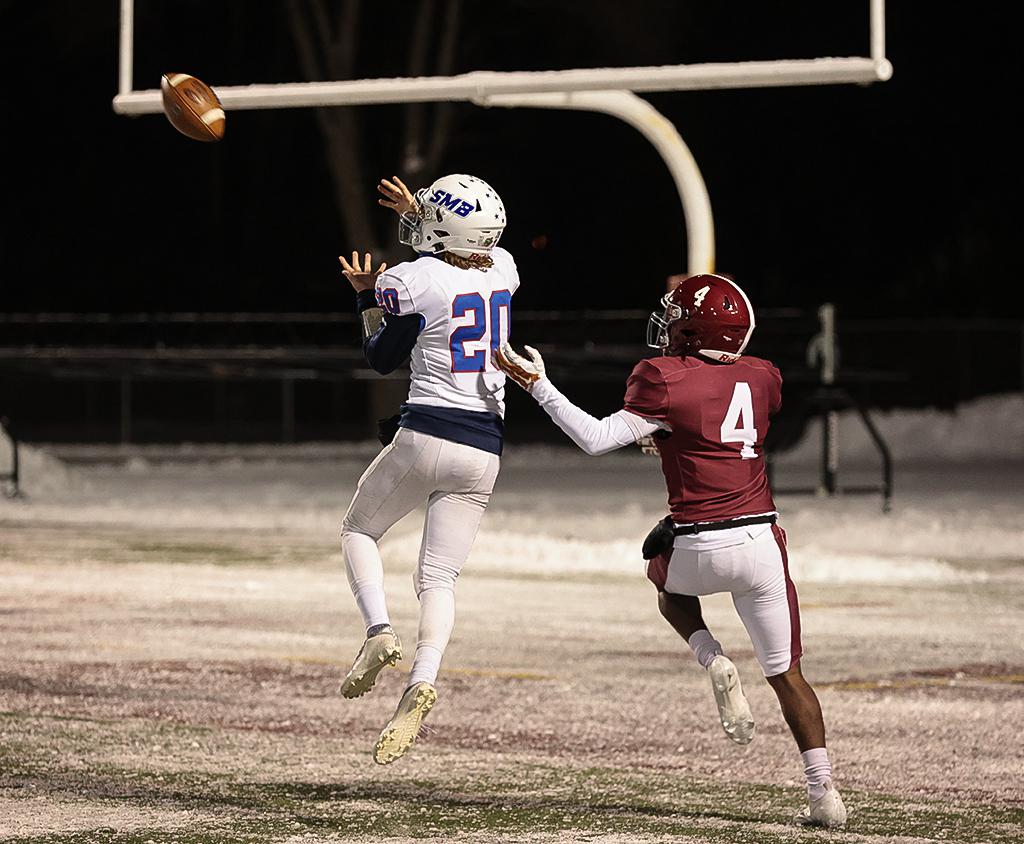 Judah Thomas (20) pulls down an interception at the goal line in the final minutes of the game. Thomas led the Wolfpack's offense, completing three touchdown passes and a rushing TD to finish the game. Photo by Cheryl A. Myers, SportsEngine