Chuck Gilbert III and Emmett Johnson scored touchdowns within a three-minute span, helping the Stars regain the lead en route to a 29-27 victory. 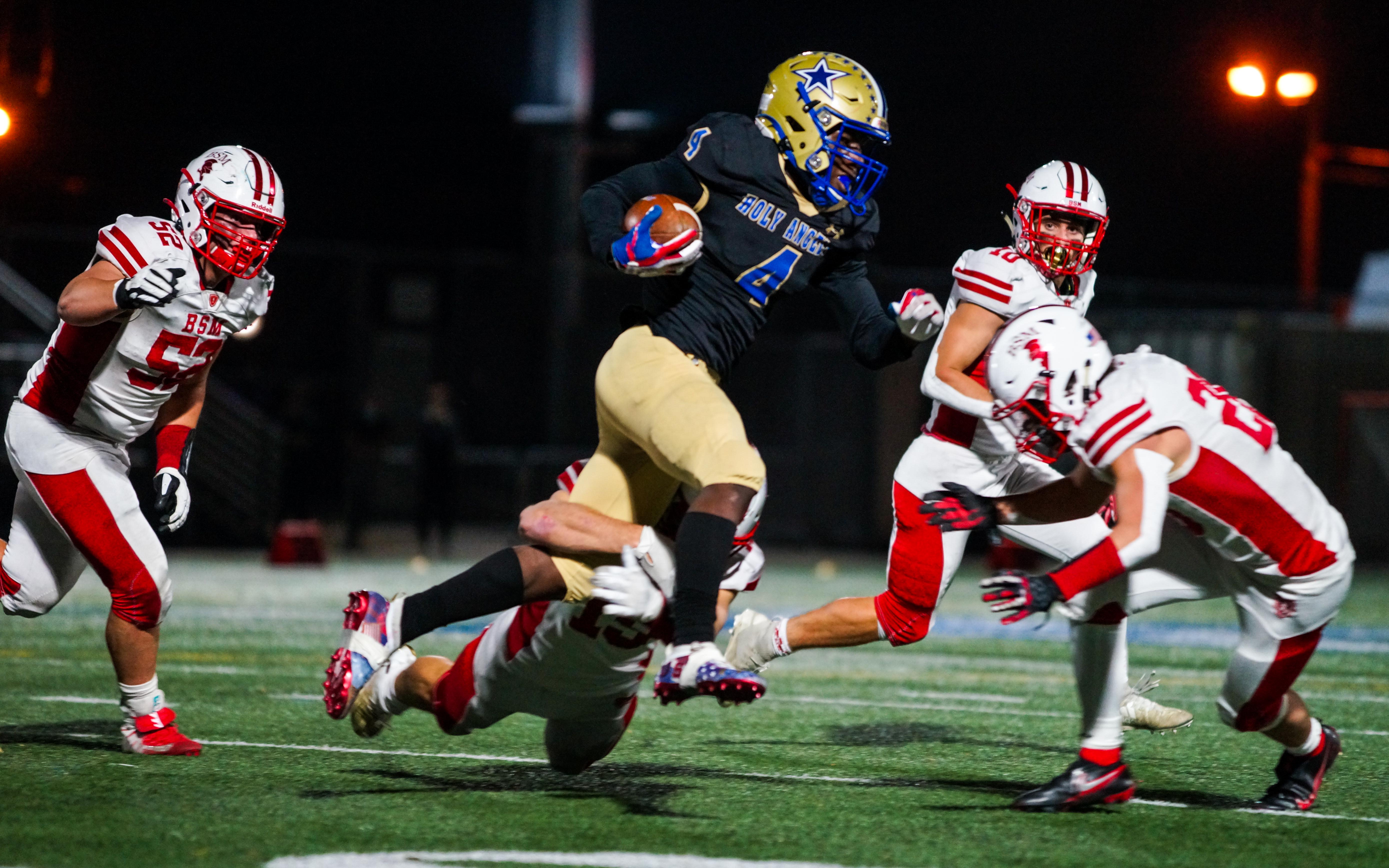 Trailing 19-7 midway through the third quarter, Holy Angels scored touchdowns on back-to-back offensive plays before adding a fourth-quarter touchdown in a 29-27 victory over rival Benilde-St. Margaret’s.

Chuck Gilbert III scored the first of the two touchdowns with 4:47 left in the third quarter Friday, catching a 25-yard touchdown pass from Theo Doran one play after an interception by Terrence Roberts Jr.

The Stars’ Emmett Johnson scored the second touchdown just under three minutes later on a two-yard run after a botched punt attempt by the Red Knights.

Johnson added a 12-yard score with 9:06 left in the fourth quarter to increase the lead to 29-19 before the Stars, after a late Benilde-St. Margaret’s touchdown, recovered an onside kick to seal the victory.

“Those guys battled a lot of adversity and some mistakes,” Holy Angels coach Jim Gunderson said. “They just stuck with it and believed in it until the end and came out on top.”

Holy Angels (4-1) scored first with Doran throwing a 15-yard touchdown pass to Bryce Boyd with 4:13 left in the first quarter.

But Benilde-St. Margaret’s (2-3) took advantage of two turnovers by the Stars to take a 13-7 lead into halftime. The Red Knights extended the lead to 19-7 early in the third quarter on a one-yard touchdown pass from Jackson Leischow to Charlie Hansen. But they struggled to do much more offensively until late in the game.

Hansen and Jonny Woodford caught touchdown passes for the Red Knights, who had won three consecutive games against Holy Angels, and William Petty rushed for a score. Woodford’s second touchdown catch, a 5-yarder, cut the lead to 29-27 with 35 seconds left.

“We kind of had their number the last few years, and they were due,” Benilde-St. Margaret’s coach Jon Hanks said.

For Holy Angels, the victory marked the second time in as many weeks it overcame a two-touchdown deficit in the second half. Against Cooper on Oct. 30, the Stars trailed 29-14 late in the third quarter before scoring three unanswered touchdowns for a 35-29 victory. 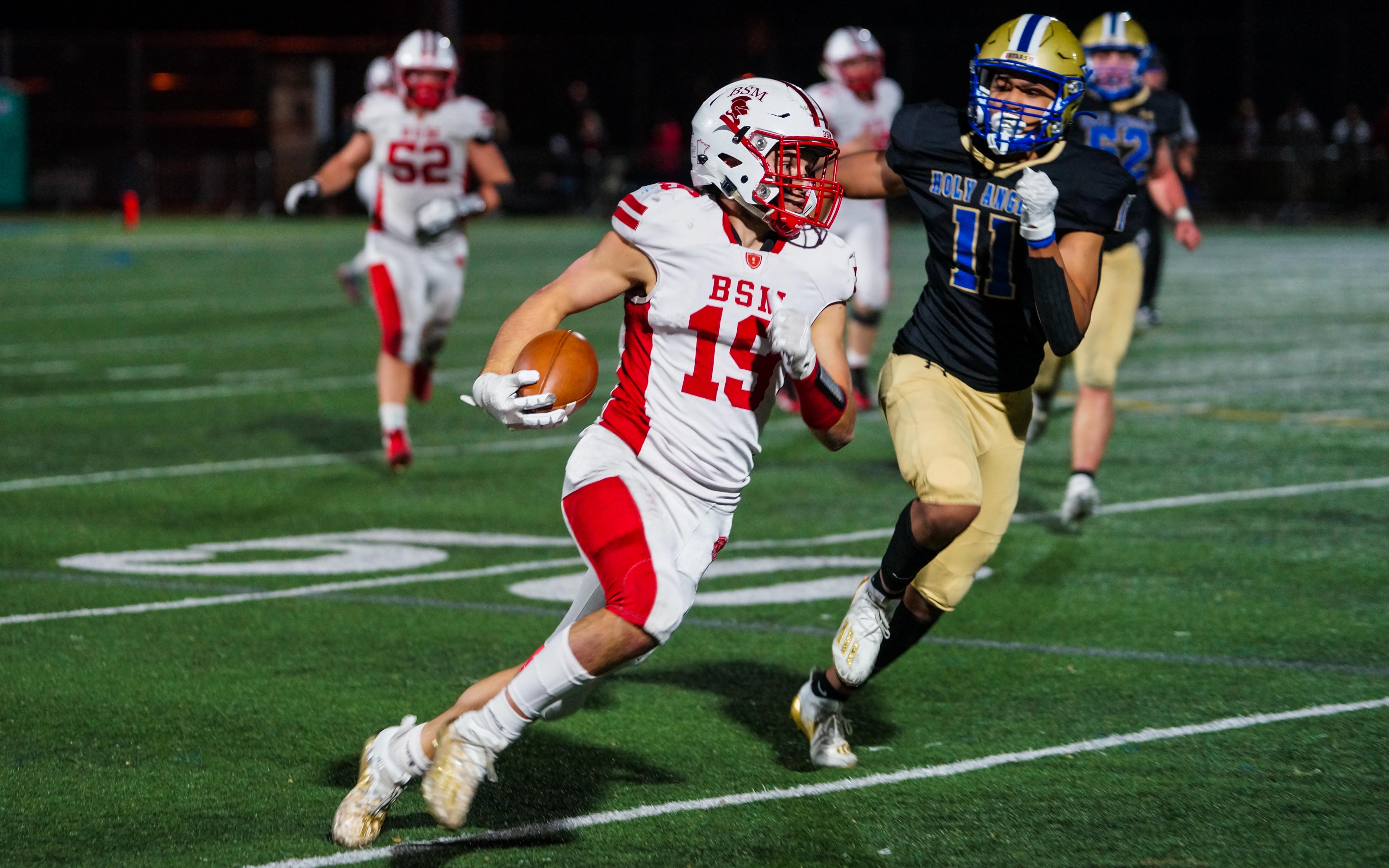 Chuck Gilbert III and Emmett Johnson scored the back-to-back touchdowns for the Stars (4-1), who trailed 19-7 midway through the third quarter before scoring 22 unanswered points.

Gilbert's touchdown, a 25-yard reception from quarterback Theodore Doran, came with 4:47 left in the quarter one play after an interception by the Stars' Terrence Roberts Jr. 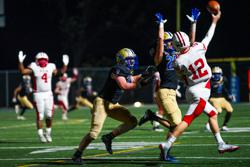 Johnson's score, a two-yard rush, came just under three minutes later, one play after a botched punt attempt by the Red Knights.

Johnson, the Stars' leading rusher, finished with an unofficial 122 yards and added a 12-yard rushing touchdown in the fourth quarter.

A touchdown pass from Benilde St. Margaret's Jackson Leischow to Jonny Woodford cut the Stars' lead to 29-27 with 35 seconds left, but Holy Angels recovered an onside kick to seal the victory.

William Perry rushed for a score and Woodford and Charlie Hansen caught touchdown passes from Leischow for the Red Knights (2-3), who had won the last three matchups with Holy Angels.