The junior plays three sports but football is his favorite. “Sports have really been a challenge for me in a positive way,” he said through a sign language interpreter. 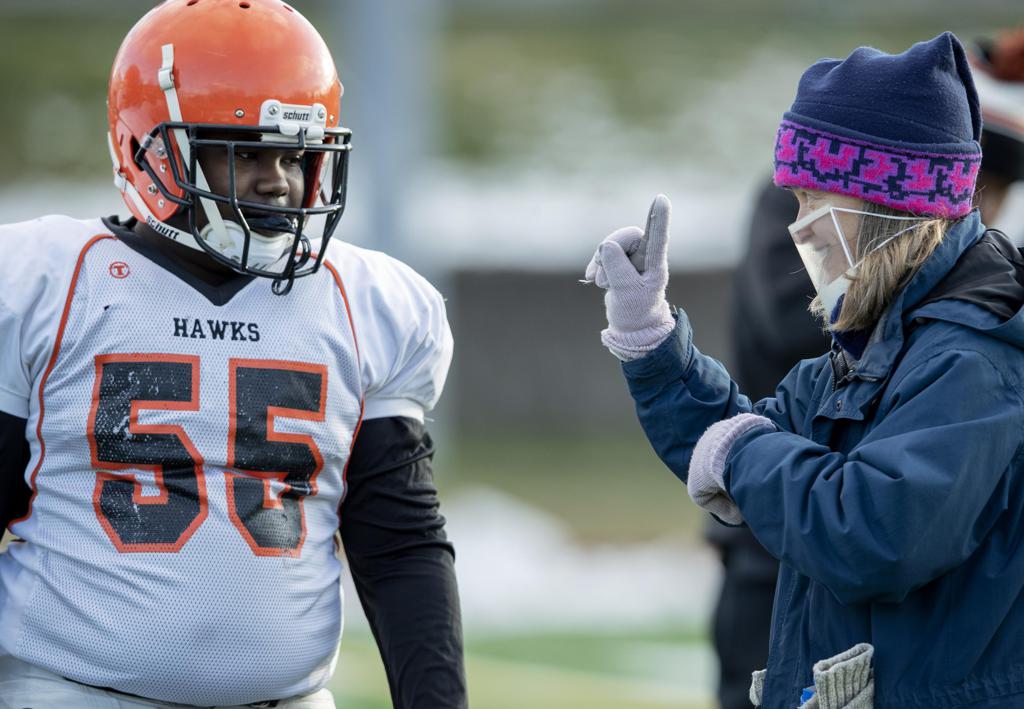 As a child, Sam Smith could say “ball” before more standard first words such as “mom” or “dad.”

More words surely would come as Smith overcame what doctors said was a speech delay. Instead, he later was diagnosed as deaf/hard of hearing. His speech was affected. Now a junior at St. Paul Humboldt, he wears a hearing aid in his partly functional right ear. But his left ear cannot be helped.

Despite his challenges, Smith made good on his first word, playing baseball, basketball and his favorite, football. This season marks his third as an offensive and defensive lineman for the Hawks (0-2), who play Friday against St. Paul Johnson (2-1) at Bakken Field.

“I feel like sports have really been a challenge for me in a positive way,” Smith said through sign language interpreter Angelina Roslik. “When I come to football practices or games, I really push myself and it makes me feel good to not give up.”

During practices and games, Roslik serves as his personal assistant coach, signing play calls and ensuring Smith misses as little communication as possible. In the huddle, Smith said he uses his eyes a lot and lip-reads “so that it’s more clear” when gets the snap count from the quarterback.

Challenges emerge once Smith gets in his stance at the line of scrimmage. He can hear low-end sounds such as a quarterback barking out the call.

“But sometimes, ‘hut’ can sound like different words so it’s confusing for me,” Smith said. “But if I make a mistake, I work on it again and again so that I can be successful.”

“He’s one of our better linemen,” Flores said. “Sam is a smart kid and he’s so willing to learn. I don’t look at Sam as a player with special needs. I just look at him as another player for us.”

Sometimes, Flores said he talks directly, and loudly, to Smith “because I think it’s good for his confidence that he doesn’t always need to rely on someone else” when communicating.

This season Smith’s budding confidence has come through on defense, where he can watch the ball being snapped and fire out of his stance. Flores said a more aggressive Smith is making more tackles.

Coaching at Humboldt, a team with only 19 players, means Flores or other coaches need to help in a drill. Smith relishes facing Flores.

“I line up against him sometimes and he will say ‘I can take you, coach,’ ” Flores said. “He’s always up for a challenge. He inspires me to show up everyday because I know he’s out there giving his all.”

Joy of participation fuels Smith’s relentlessness. He arrived at Humboldt after several years at Metro Deaf School, a St. Paul-based public charter school for students from preschool to 12th grade. Smith’s mother, Avina Jacobs, said her son enjoyed “going to a school where people were like him.”

But Smith also felt the tug of football. He was aging out of youth football, and Metro Deaf did not offer the sport. So he transferred to Humboldt, where he could play football and benefit from the school’s robust Deaf/Hard of Hearing Program.

“Sports really help him cope with life,” Jacobs said. “He hates being deaf. He wants to be as normal as possible. I was proud of him wanting to go to a regular public school.”

Jacobs said her son carries a 3.53 grade-point average and has “blossomed like a tree” throughout his time at Humboldt. “The staff has done wonders with my son,” she said.

The appreciation is mutual.

“It’s easy to work with Sam,” said Roslik, who also works with Smith in four of his classes. “He’s an awesome kid. He encourages other kids. He’s focused. And he’s patient. He will sit and work until the job is done.”

Persistence is in Smith’s nature. Even as a youngster, when doctors asked him what he wanted to do with his life, Smith said he wanted to play football for the Minnesota Vikings.

“They would be like, ‘OK,’ but they didn’t take him seriously,” Jacobs said. “He still says that right to this day. I don’t think he’ll ever stop trying.”