Hansen, top-ranked Lakeville South tear through No. 7 Farmington in 41-7 blowout

Class 6A: Carson Hansen paced the Cougars' ground game with four touchdown runs, helping his team stay unbeaten with one week remaining in the regular season. 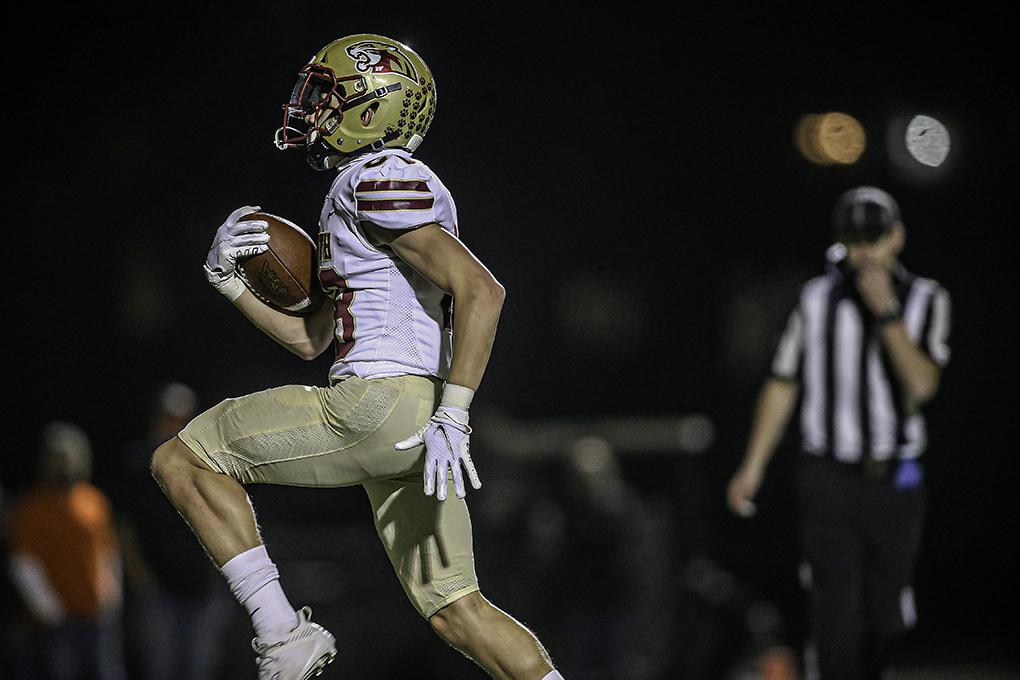 Carson Hansen danced into the end zone for his second of four touchdowns in Lakeville South's 41-7 victory at Farmington. Photo by Mark Hvidsten, SportsEngine 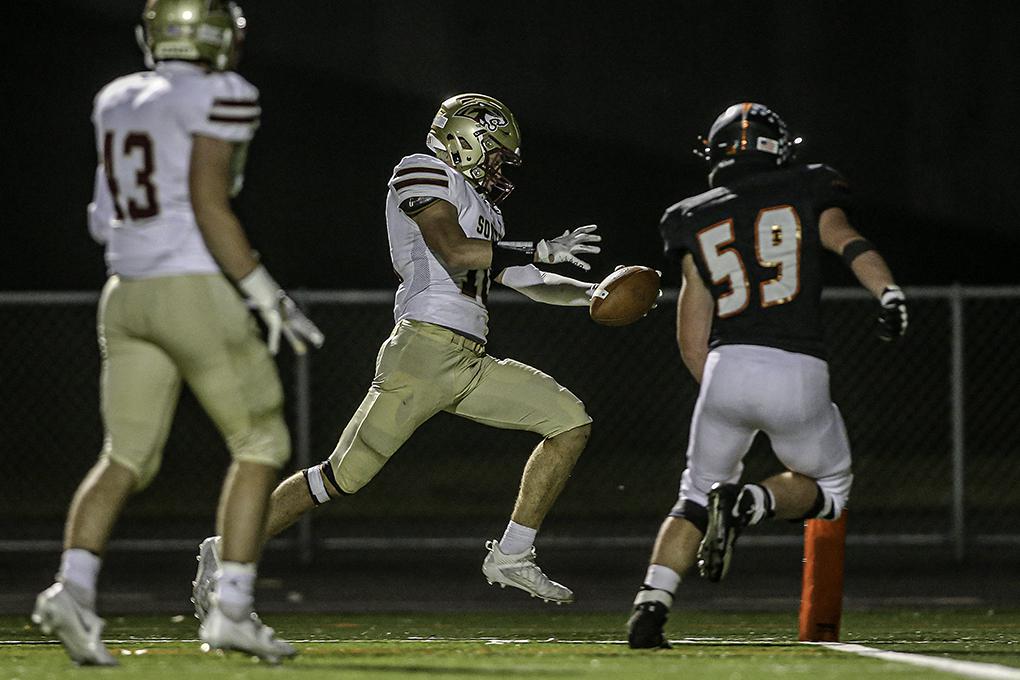 Lakeville South is built different from other teams, as the kids would say.

The Cougars’ vaunted power T offense bulldozed past host Farmington 41-7 on Friday night, as they racked up 294 yards — all without completing a pass.

“Part of what we do is we want to be physical, run the ball and control the clock,” said Lakeville South coach Ben Burk. “We came into the game wanting to throw more and they took us out of our game plan there. Credit to their defense for pressuring our quarterback and not letting us complete passes.”

Lakeville South, ranked No. 1 in the Class 6A Associated Press statewide poll, entered the game averaging 50 points a game — tops among all Minnesota schools. And the Cougars were on pace to reach that mark when they leapt to a 13-0 lead after 5 minutes, 34 seconds of game time.

Sophomore running back Carson Hansen capped an eight-play drive with a 20-yard touchdown rush, his first of four TD runs of the night.

The No. 7-6A Tigers attempted a fake punt rush that was quickly snuffed out at their own 20-yard line. The bold move backfired as Lakeville South junior Camden Dean ran for a 20-yard touchdown on the next play giving the Cougars a 13-0 lead following an unsuccessful extra-point attempt. 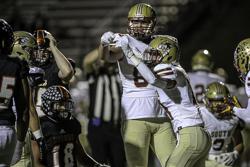 Farmington seemed on the ropes after a drive stalled near the goal line. But it got the stop it needed when the Tigers stuffed Lakeville South on a fourth-and-inches attempt from its 10-yard line. Senior quarterback Alex Berreth escaped would-be tacklers to cash in on an 8-yard scamper and the extra-point kick was good, narrowing the gap to 13-7.

Farmington had two cracks to tie the game, and potentially take the lead, but a turnover-heavy second quarter came back to haunt the Tigers.

Hansen broke through to push Lakeville South’s advantage to 19-7 with 2 minutes, 47 seconds left on the clock before halftime. That was just the beginning for the Cougars.

“We were able to get into halftime with a 12-point lead. That’s a mark of a good team: we can play ugly and still be up and still have success,” Burk said. “We didn’t play our best game today by any means and part of that, credit to [Farmington] for getting us off our game plan a little bit.”

The Tigers (4-1, 2-1) had allowed a stout eight points per game entering Friday. Tigers coach Adam Fischer felt his defense did its part to make the game competitive during the first half.

Shoring up his team’s red zone offense is now at the top of his mind as the postseason looms.

“We were down inside the 10 three times [and didn’t score]. That was the first time we were stopped inside the red zone all year,” Fischer said. “Disappointing that we didn’t execute at a little higher level against a caliber of team we’re going against. Offensively, we didn’t do that. Defensively, I thought we battled like crazy.”

The Cougars (5-0, 4-0) were sharp out of the break to begin the second half. They stymied the Tigers into a quick punt that was blocked and recovered at the 33-yard line.

Hansen’s breakout game continued when he found paydirt from 21 yards out. His primary backfield mate, Garrett Savard, punched in the two-point try, knocking the wind out of the sails for the Tigers and their faithful of 250 spectators permitted into the game due to COVID-19 pandemic.

Patterson read Berreth’s eyes and snatched another interception that he took back 20 yards for a TD on an athletic play near the pylon.

“That’s every game,” said Lakeville South’s Riley Mahlman of Patterson’s and Hansen’s big nights. “Reid has been a stud all year probably leading the team in tackles. Carson stepped up. He was our second-string running back and all of a sudden he had his opportunity and stepped up. And he’s still a young guy, so he only has room to improve.”

As an offensive and defensive lineman, Mahlman doesn’t show up much on the stat sheet but he’s caught a few passes in his career as a 6-foot-8, 290-pound mismatch at tight end. He will, however, show up in Big Ten matchups on Saturdays when he heads to Wisconsin next year as an offensive tackle.

“[The Tigers] were undefeated and they have really good skill players,” Mahlman said. “The major key was stopping the big plays. They have guys that can catch a 1-yard pass and take it 99 yards. We did a great job — seven points. We had a lot of short-yardage defensive situations and we played great.”

Nursing a big lead is what the Cougars are made to do. They chewed up much of the clock in the fourth quarter and handed the ball to Hansen from a yard out to record his final touchdown of the game.

“They’ve got a bunch of scholarship guys over there. They’ve got high caliber players and are really well-coached,” Fischer said.

Lakeville South’s high-octane offense revved its engine to the tune of a 41-7 victory over Farmington at Farmington High School on Friday to remain unbeaten.

The Cougars, ranked No. 1 in the Class 6A statewide Associated Press poll, took care of the No. 7-6A Tigers, and looked poised to run away with the game by taking a 13-0 lead midway through the first quarter.

Lakeville South's Carson Hansen and Camden Dean each scampered in for touchdowns from 20 yards out. Dean’s TD was set up by a failed fake punt rush on fourth-and-7 from Farmington’s 20-yard line.

Farmington (4-1, 2-1) got on the scoreboard with an 8-yard quarterback scramble from Alex Berreth early in the second.

Lakeville South (5-0, 4-0) took a 19-7 lead into halftime, thanks to Hansen rushing untouched up the middle for a 28-yard TD. A close call on a two-point pass attempt was ruled incomplete. That missed opportunity didn’t matter, however, as the Cougars came out on fire to start the second half. A quick three-and-out on defense and a blocked punt set Lakeville South up at the opposing 33-yard line.

Soon after, Hansen found paydirt again from 21 yards out, and Garrett Savards’ two-point rush made it 27-7 in favor of Lakeville South.

The Cougars broke it open when quarterback/linebacker Reid Patterson’s second interception of the night was returned 22 yards for a TD.

The cherry on top for Lakeville South came on Hansen’s 1-yard touchdown rush with 1 minute, 53 seconds remaining, which capped a time-bleeding drive. Hansen’s TD was his fourth of the game.

The Cougars averaged 50 points per game entering Friday’s contest. They did not complete a pass on four attempts. 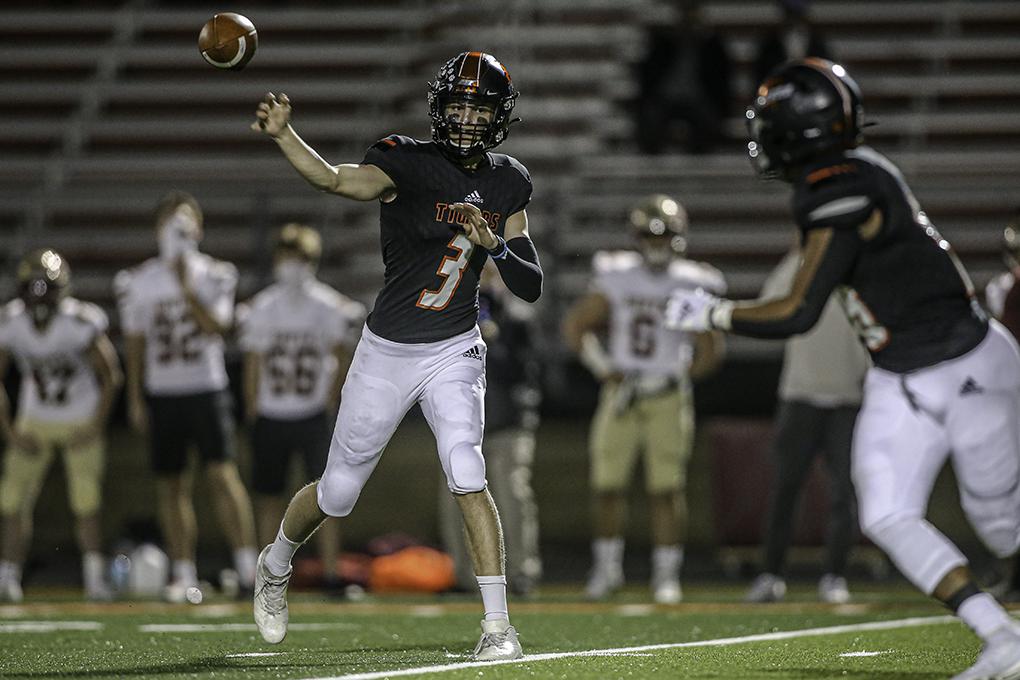 Farmington quarterback Alex Berreth passes to a running back in the third quarter. Photo by Mark Hvidsten, SportsEngine