Dillon Peterson returned an interception 45 yards for a touchdown just before halftime to key a 20-14 victory. 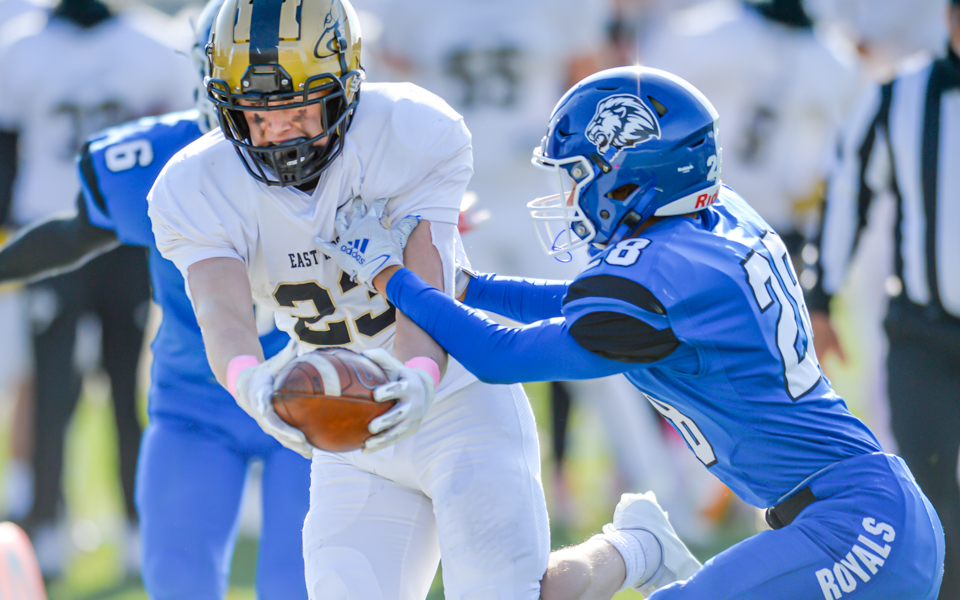 East Ridge’s Ben North (23) reaches for the end zone to give the Raptors their first TD in a 20-14 win over the Royals on Saturday afternoon in Woodbury. Photo by Earl J. Ebensteiner, SportsEngine

Two weeks without a game. Their intracity archrival up next.

Yeah, you could say the East Ridge Raptors were ready to play Saturday.

The East Ridge defense forced five turnovers, highlighted by a pick-six just before halftime, and that lifted them to a 20-14 victory over Woodbury.

East Ridge (3-0) last played a game on Oct. 15, a 13-0 victory over Lakeville North. The ensuing game, against White Bear Lake, was postponed. Knowing his team’s biggest foe was next, coach Dan Fritze said his players were aching to get back on the field.

“We were terribly antsy, unbelievably antsy,” Fritze said. “Having that long a layoff before Woodbury? That’s something different. If it had been any other opponent, it wouldn’t have been that big of a deal. But we just could not wait for this game. I knew we’d come out and fight.”

East Ridge scored first on a 19-yard pass from Jackson Turner to Ben North for a 6-0 lead in the first quarter. Woodbury answered on its next possession. A four-yard scoring run by quarterback Donald West came three plays after the Royals pulled off a successful hook-and-lateral to position them deep in East Ridge territory. It gave the Royals their only lead of the game, 7-6.

No one would blame Woodbury coach Andy Hill for erasing video footage of the second quarter. After giving up a touchdown early in the quarter, the Royals turned over the ball four times.

Woodbury’s defense held up admirably, not allowing East Ridge to turn the first three giveaways into points. But the fourth was a killer.

With less than a minute to go before halftime, a pass by quarterback Scott Hanson, part of Woodbury’s two-QB attack, sailed right into the arms of senior safety Dillon Peterson. He ran 45 yards untouched for a touchdown, giving East Ridge a 20-7 halftime lead.

“We always try to keep the momentum high,” Peterson said. “That set the bar for us to go even higher and then getting better through out the game.”

Fritze said Peterson’s background as a receiver is one reason he was inserted as a safety.

“Having guys on defense that can make plays, that’s different,” Fritze said. “When he gets it, he’s looking to score.”

Woodbury (2-2) cut the lead to 20-14 in the third quarter when its biggest offensive play of the game, a 38-yard pass from West to Joe Mahoney, set up a six-yard touchdown from R.J. Altman. The Royals didn’t seriously threaten after that.

Afterward, both coaches talked about the importance of the rivalry.

“It’s special,” Fritze said. “Our kids are friends with them. We’ve got kids who can say ‘My best friend is on that team.’ ”

Hill was a bit less thrilled by the outcome, saying, “It’s like drinking rat poison. I think we’ve won the last four, but that doesn’t make this one sting any less.” 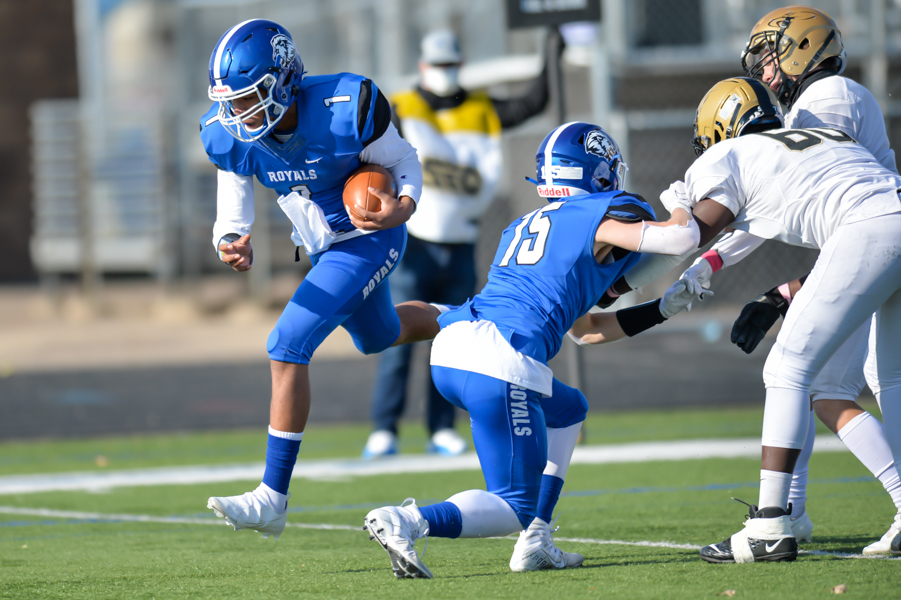 Woodbury quarterback Donald West (1) carries the ball in for the Royals' first touchdown in a 20-14 loss to rival East Ridge. Photo by Earl J. Ebensteiner, SportsEngine

The biggest turnover came with 24 seconds left in the first half. East Ridge’s Dillon Peterson picked off a Scott Hanson pass and returned it 45 yards for a touchdown and a 20-7 halftime lead.

Woodbury managed a six-yard touchdown run by RJ Altman in the third quarter, but failed to seriously threaten after that.

East Ridge improved to 3-0. Woodbury fell to 2-2. The Royals also played last Monday, losing to Rosemount, as both teams sought to make up games disrupted by COVID-19 interruptions.

Check back later for more on Saturday's game. 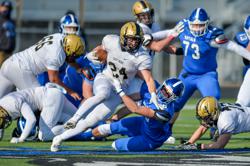