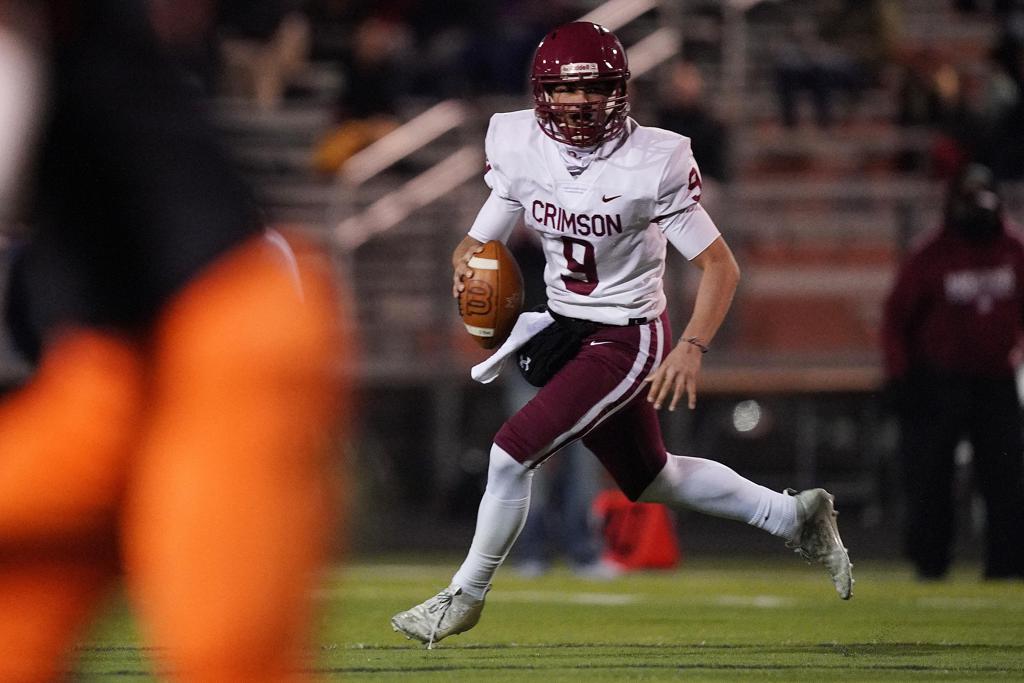 Nate Elmes lost his job, found another that suited him perfectly and had more fun Friday than he’s had all season.

The sturdy senior was replaced at quarterback before Maple Grove’s 31-7 romp over Osseo. Leaving a position he had played since his sophomore season, he was moved to fullback and ran like he’d played the position his whole life. He rushed for 90 tough yards, scored touchdowns on runs of 2 and 29 yards and never once hung his head or felt sorry for himself.

“It’s just the way this season has worked out,” Elmes said. “Coach [Matt] Lombardi, he wanted to control the line of scrimmage, and me being 6-3 and 225 pounds, he felt that was the best possible way, to have me be a run force.”

The change was spurred by the Crimson’s 13-6 loss to Centennial in its previous game. Lombardi realized his team was lacking something, so he asked sophomore Jacob Kilzer to take over under center.

Kilzer’s outing wasn’t perfect, but it was efficient and largely mistake-free. What Lombardi was seeking — more physicality on offense and more energy from the team — was evident from the start.

The Crimson dominated Osseo in the trenches in the first quarter, running 23 plays to just three for the host Orioles. Maple Grove led 3-0 after the first 12 minutes.

The Crimson took full control  in the second quarter. Elmes capped an 82-yard, 16-play drive with a 2-yard touchdown run. After the Crimson defense stuffed the Orioles on fourth down at the Maple Grove 35, the next play was a Kilzer pass to Damarian McCoy, who had gotten free behind the Osseo defense, for a 65-yard touchdown.

“We were flat last week,” Lombardi said. “We went to Nate and said we need to be physical. You need to change your role if you want to make this team what you want. We need enthusiasm back.”

Osseo, whose two victories equaled its output in the two previous seasons combined, failed to generate offense in the third quarter against Maple Grove’s fast and aggressive defense.

Sufficiently energized, the Crimson converted two abbreviated Orioles possessions into touchdowns. Derrick Jameson sprinted off left tackle for a 35-yard score, followed by Elmes charging up the middle for a 29-yard touchdown, bumping the lead to 31-0.

“I had a lot of fun, personally,” Elmes said. “It was all 11 of us working together. When you ask what the transition [to fullback] was like, it was just a lot of fun.”

Lombardi said last week’s loss sent a message to his team, saying “we learned a lesson about the joy of Friday night. They came out this week, had way more enthusiasm, way more emotion.”

He credited sacrifices made my his players, led by Elmes, for his team getting its drive back.

“A lot of kids made selfless moves for the good of the team,” he said. “I give Nate credit. He kind of volunteered. He played great. I’m super proud of him.”

Kilzer operated the offense well and Elmes used his 6-3, 218-pound body to power his way to 90 yards and two rushing touchdowns  as the Crimson cruised past Osseo 31-7.

Maple Grove, which struggled offensively in a 13-6 loss to Centennial the previous week, installed Kilzer to get them a spark and it worked immediately Friday at Osseo. The Crimson had 25 first quarter plays from scrimmage to just three for Osseo en route to a 3-0 lead.

Maple Grove added to its lead with two touchdowns in the second quarter on a two-yard dive from Elmes and a 65-yard strike from Kilzer to Damarian McCoy, his first catch of the season.

The Crimson got two long touchdown runs on the third quarter – 35 yards from Derrick Jameson and 29 from Elmes.

Osseo scored its touchdown in the fourth quarter when Jacob Jackson raced 19 yards around the right side.