Jake Ratzlaff scored two touchdowns for the Irish in the first half, including a fumble he scooped up and ran in for a TD from 40 yards out. 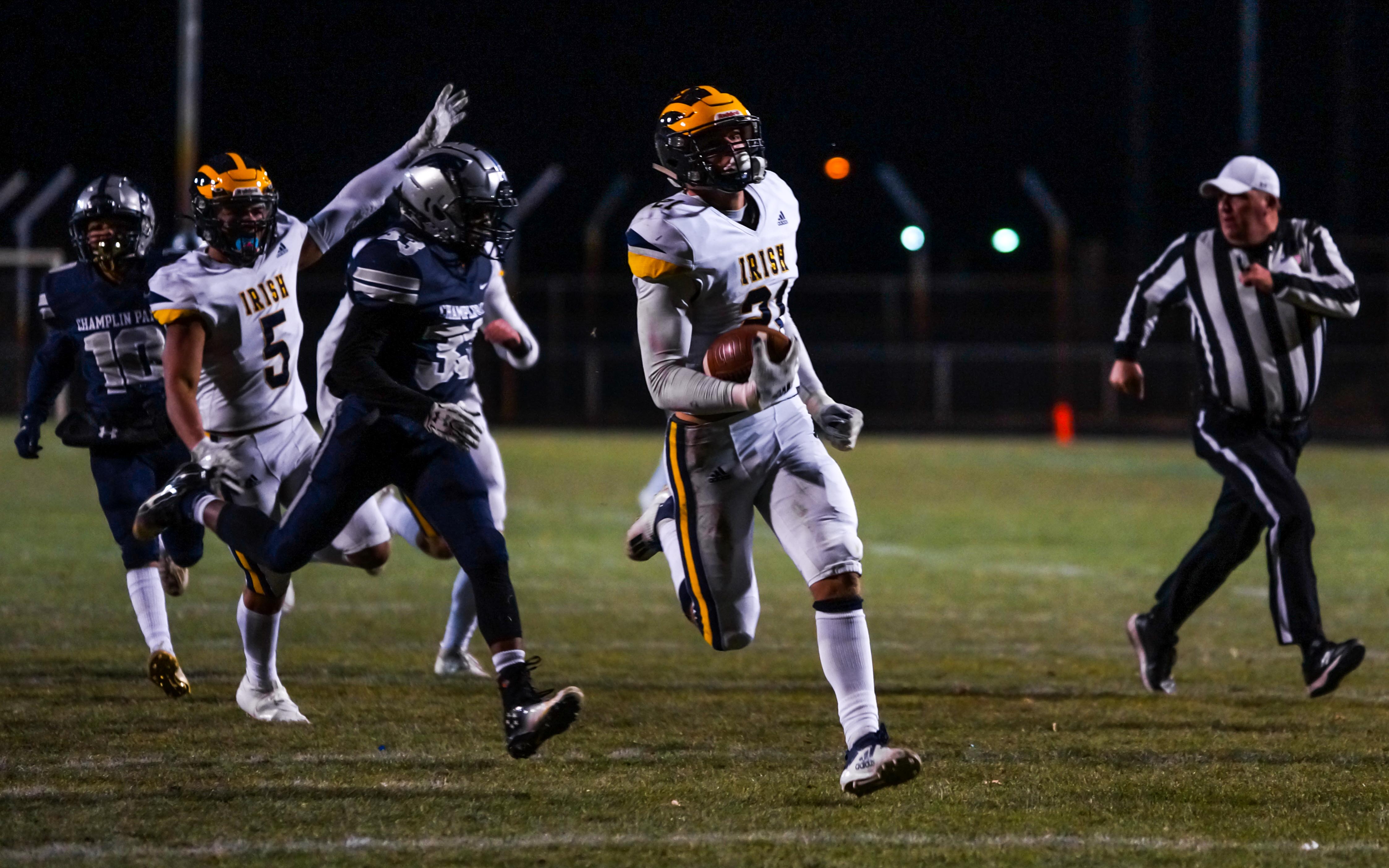 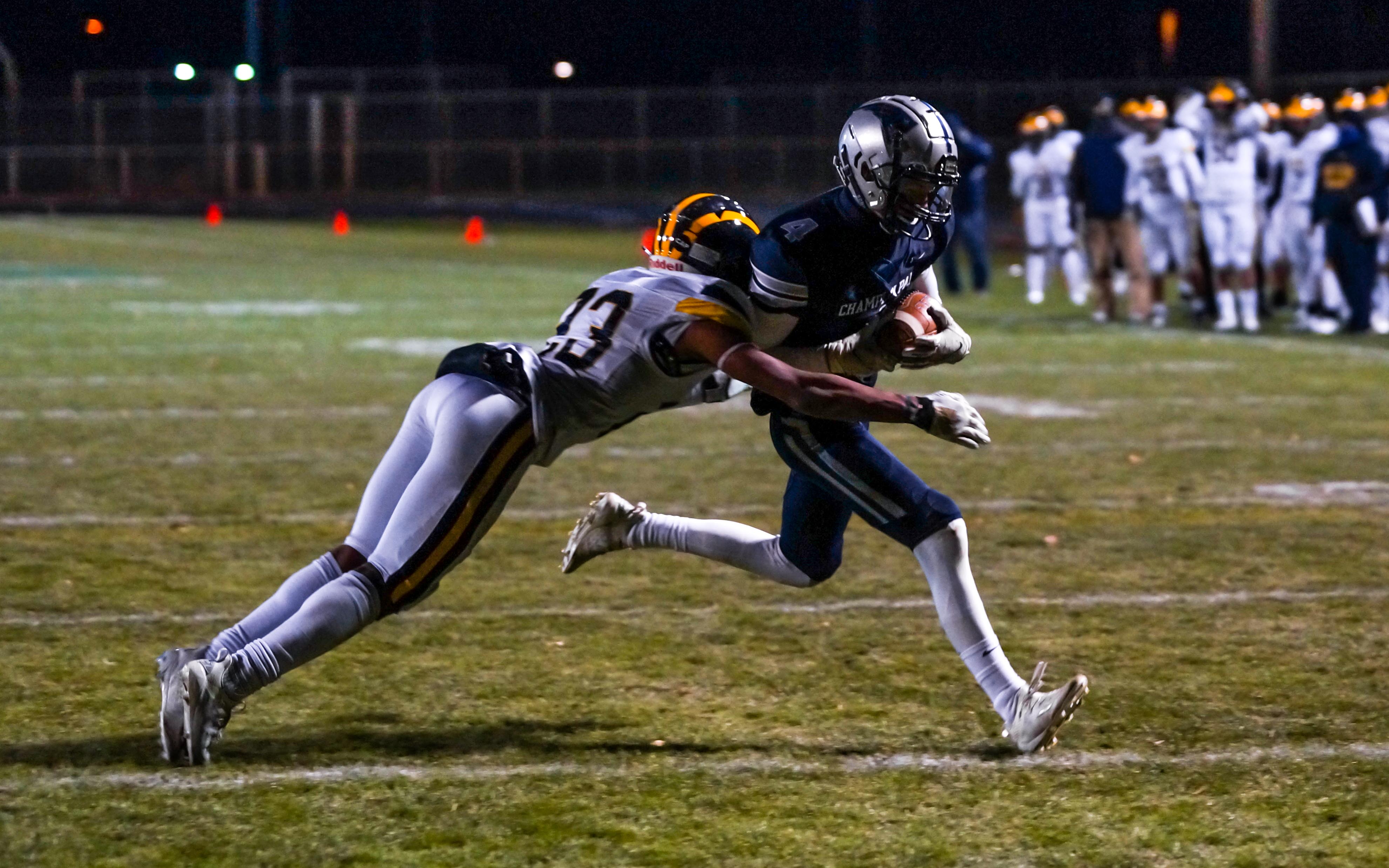 Champlin Park's Myer Schmitz (4) takes a pass in for a touchdown against Rosemount at home on Oct. 30. Photo by Korey McDermott, SportsEngine

It was almost the perfect game for Jake Ratzlaff. The 6-foot-2 wideout and defensive back was all over the field Friday night, helping Rosemount capture a 27-13 win over Champlin Park in a Class 6A matchup at Champlin Park High School.

“He’s a special player,” said Rosemount coach Jeff Erdmann. “We think he’s the best player in the state. There’s a reason he’s going to be playing [in the] Big Ten, if he chooses football.”

Ratzlaff got things going on the offensive side of the ball Friday, hauling in a 46-yard touchdown pass that had been thrown by quarterback Riley Gruenes.

“It was a perfect dump over the middle,” Gruenes said.

After the ensuing kickoff, and just one play later, Ratzlaff scooped up a fumble near midfield and returned it 40 yards for a touchdown. Within a minute of play, the 215-pounder had two TDs.

“I’m going to credit my teammates,” Ratzlaff said. “That forced fumble was from one of our guys. I was just fortunate enough to be there.” 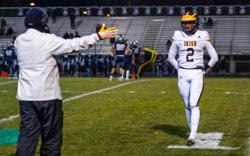 “First half, we came out strong,” Ratzlaff said.

Things looked to be going in the same direction as the second half got underway. After the Rebels were forced to punt following a three-and-out, it was once again Ratzlaff who came out of nowhere. He blocked the punt, setting up the Irish, who are ranked No. 8 in the Class 6A Associated Press statewide poll, deep in Champlin Park territory.

“They had two guys on the o-line, and I fortunately got through and was fortunate enough to get a hand on [the ball],” Ratzlaff said.

Just a few plays later, running back Christian Graske galloped his way into the end zone from 10 yards out to give the Irish a 27-0 lead — the largest scoring deficit of the game.

Rosemount’s production quieted down from there, however, and the Rebels (2-2, 2-0) finally got on the scoreboard when quarterback Cade Fitzgerald found wideouts J.J. Robinson and Myer Schmitz for a pair of touchdowns. But it was a big enough lead for Rosemount to seal the win.

Ratzlaff finished with three catches for 71 yards, while Gruenes and Jordan Modrynski combined for 105 yards through the air.

“We didn’t build on it in that second half,” Erdmann said, adding the Irish had opportunities but that turnovers hurt. “We had a chance to make this a blowout.”

It was still a win for this Rosemount squad that has had its share of issues starting the season due to the coronavirus pandemic. Their first two scheduled games this fall were canceled due to outbreaks, delaying their first matchup to Oct. 23.

After Friday’s victory, the Irish have won three games in just eight days.

Rosemount will now have a full week to prepare for its next opponent, Burnsville. Now that their season is off and running, the Irish just appreciate the chance to get out on the field.

“That setback with COVID was hard,” Gruenes said. “A lot of guys were upset but we came back strong, winning three games in eight days. That’s something special.”

Rosemount continued its hot start with a win over Champlin Park on Friday night. The Irish, ranked No. 8 in the Class 6A Associated Press statewide poll, got off to a fast start, propelling to a 27-13 triumph over the Rebels in a matchup at Champlin Park High School.

Irish quarterback Riley Gruenes found wideout Jake Ratzlaff with his first pass of the game, connecting on a 46-yard touchdown strike to give Rosemount the lead late the first quarter. Just two plays later, while playing defense, Ratzlaff scooped up a fumble and returned it 40 yards to the end zone to make it 14-0.

The Irish (3-0, 1-0) built their largest lead when Ratzlaff blocked a punt, giving them perfect field position before Christian Graske recorded a 10-yard rushing TD to give Rosemount a 27-0 lead.

Champlin Park (2-2, 2-0) recorded a pair of touchdowns in the second half, both via passes from Cade Fitzgerald. Myer Schmitz caught a 20-yard pass, while J.J. Robinson hauled in a 22-yard catch and run.

The Irish have won three games in eight days to start the season after their first two games of the season were canceled due to COVID-19 concerns. 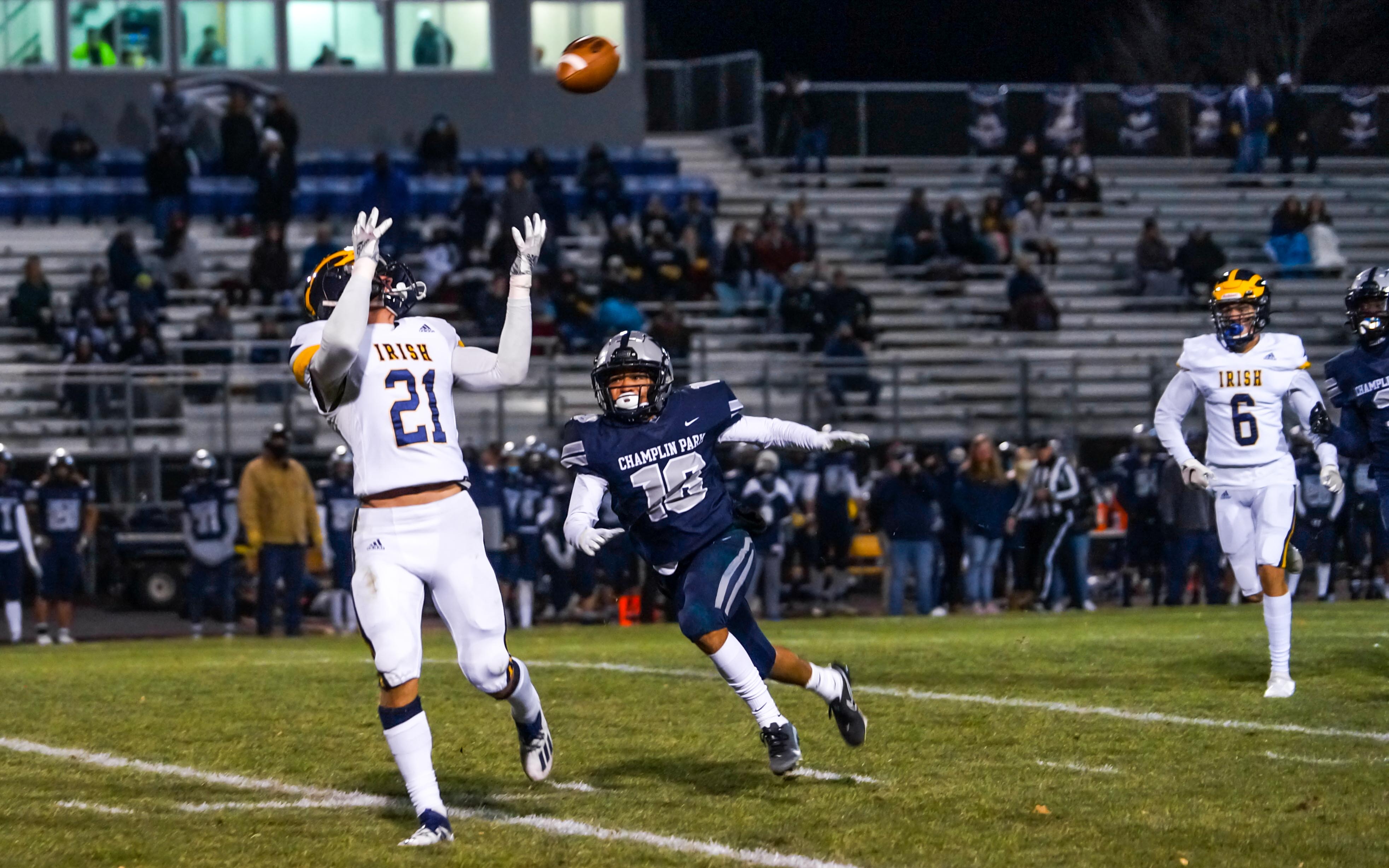 Irish receiver Jake Ratzlaff hauls in a long pass from quarterback Jordan Modrynski for his first touchdown of the night. Photo by Korey McDermott, SportsEngine