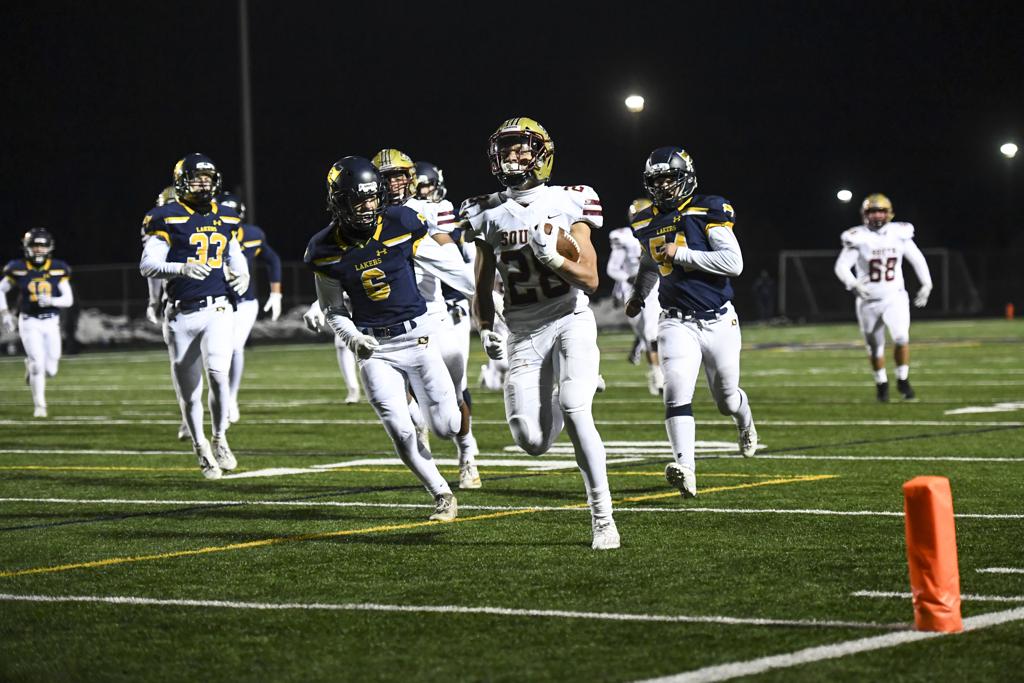 Lakeville South running back Carson Hansen (28) ran for a touchdown in the second quarter against Prior Lake. Photo: AARON LAVINSKY • aaron.lavinsky@startribune.com

Lakeville South football coach Ben Burk projected sophomore Carson Hansen to be a strong defensive back who would “also play offense” this season.

Hansen made his first start at running back Friday at Prior Lake. Four touchdowns later, the athletic and fast youngster made his case to remain in the offensive backfield.

He scored twice in each half to pace No. 1-ranked Lakeville South’s 49-35 victory against No. 3 Prior Lake.

“We’ve known about Carson for a couple years,” Burk said. “He was a stud for the freshman team last year. We had Johnny Shabaz last year and we see a lot of him in Carson, and we’re really excited about what he will continue to become.”

“I watch him on film almost every day, and I really look up to him and the player he was,” Hansen said.

Lakeville South (3-0) walloped Prior Lake (2-1) despite the absence of senior Riley Mahlman, a Wisconsin-bound offensive lineman and arguably the state’s top college prospect. Listed as a tight end, the 6-8, 290-pound Mahlman plays like an additional offensive lineman and throws key blocks in the Cougars’ power-T offense. He was injured in the season opener against Burnsville and has not returned to action.

An injury to senior running back Will Geary provided Hansen a starting opportunity. The deep Cougars looked no worse for wear. They scored on their first four possessions for a 29-21 halftime lead.

“They’re good,” Prior Lake coach Matt Gegenheimer said. “They had some guys who were banged up, but they had other guys who stepped in. They do a great job of winning the line of scrimmage. Once they can do that, with the backs they have, it’s difficult to get stops.”

Prior Lake sophomore Joseph Krouse proved difficult to corral, too. His work in the first half — a 45-yard run and a 93-yard kickoff return — kept the Lakers on track.

In the second half, Prior Lake’s defense got two coveted stops and forced Lakeville South to punt. But each time, the offense gave the ball back.

“We hung in there but you can’t fumble the ball in games like this,” Gegenheimer said.

The Cougars turned each gift into Hansen touchdowns.

“The offensive line did a great job making holes against a good defense,” Hansen said. “Beating them gives us a lot of energy going forward for the next few weeks.”

The Dan Patch Stadium scoreboard at Prior Lake didn’t start functioning Friday until seconds remained in the first half.

A busy first half by Lakeville South and the Lakers might have caused it to short out, anyway. They combined for seven touchdowns in the first two quarters. But No. 1 ranked Lakeville South maintained its superior pace in the second half en route to a 49-35 victory.

The Cougars led 29-21 at halftime on the strength of four rushing touchdowns, two of them from sophomore running back Carson Hansen, who wasn’t close to finished.

Fellow sophomore Joseph Krouse kept No. 3 Prior Lake in the game with two long scores, a 45-yard run and a 93-yard kickoff return.

Hansen’s third scoring run capped a Cougars’ drive started at midfield after a Prior Lake fumble. Trailing 36-21, the Lakers answered with a third quarter touchdown. But it wouldn’t be enough. A second Prior Lake fumble set up a fourth touchdown drive finished by Hansen.