The Cadets' Danny McFadden scored the deciding touchdown in the fourth extra session after the Zephyrs had led the game for most of regulation. 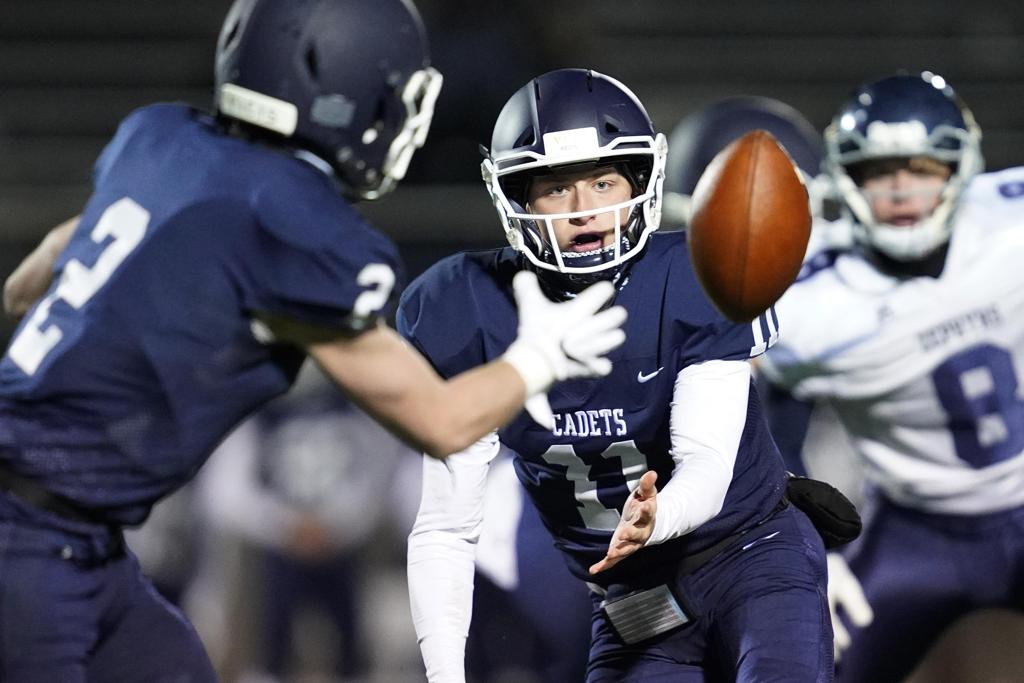 For three quarters on Friday, St. Thomas Academy didn’t generate much offense against a Mahtomedi team that it handily defeated in 2018 and 2019.

But the Cadets found their offensive groove in the fourth quarter, tying the score on a 50-yard touchdown run by Danny McFadden with 3:18 left in regulation. They capped off the rally in overtime in a 27-21 victory over the Zephyrs.

McFadden scored twice, including the game-winning 2-yard run in the fourth overtime. Grady O’Neill scored the Cadets’ first touchdown of the game and Baker Reding added one in overtime. The Cadets (3-0) are ranked second in the latest Class 5A poll.

“Any time you get two teams in the top 10, you never know what’s going to happen,” third-year St. Thomas Academy coach Dan O’Brien said. “It wasn’t pretty, but it counts the same.

Eighth-ranked Mahtomedi (2-1) took the lead on its first possession, with quarterback Johnny DeVore and wide receiver Ethan Loss connecting for a 44-yard touchdown pass early in the first quarter. Hampered by penalties, neither team produced much offense for the rest of the first half or the third quarter.

Early in the fourth quarter, St. Thomas Academy’s Reding threw a 59-yard touchdown pass to O’Neill to tie the score at 7-7. Mahtomedi regained the lead on a 5-yard rush from Devore just 2:30 later.

After McFadden’s tying touchdown later in the quarter, the teams traded touchdowns and two-point conversions in the first overtime, and neither scored in the second.

In sudden-death tries in the third and fourth overtimes, the Cadets stopped a pair of Mahtomedi passing attempts before McFadden scored the game-winner.

“We just knew we had to finish it off,” McFadden said. “Our attitude always remained the same: Whatever happens, we’re just going to go out the next play and try to finish it.”

O’Brien said his team had to rely more heavily on McFadden than usual on Friday, with his backfield companion, Love Adebayo, nursing an ankle injury. He added that McFadden told the coaches that he was prepared to embrace the extra workload.

Jacob Wynia also caught a touchdown pass for Mahtomedi, the Zephyrs’ first points against the Cadets since the first half of their 2017 matchup.

Danny McFadden scored the game-winning touchdown in the fourth overtime after a defensive stop to lead St. Thomas Academy over Mahtomedi 27-21.

Grady O'Neill scored once and McFadden scored three times for the Cadets (3-0), who never led in regulation in the game Friday in Mendota Heights.