After quiet first half, Osseo slugs its way to victory over Totino-Grace

Tied 7-7 at halftime, the Orioles and Eagles combined for six touchdowns in the second half — four of which came in the final quarter. 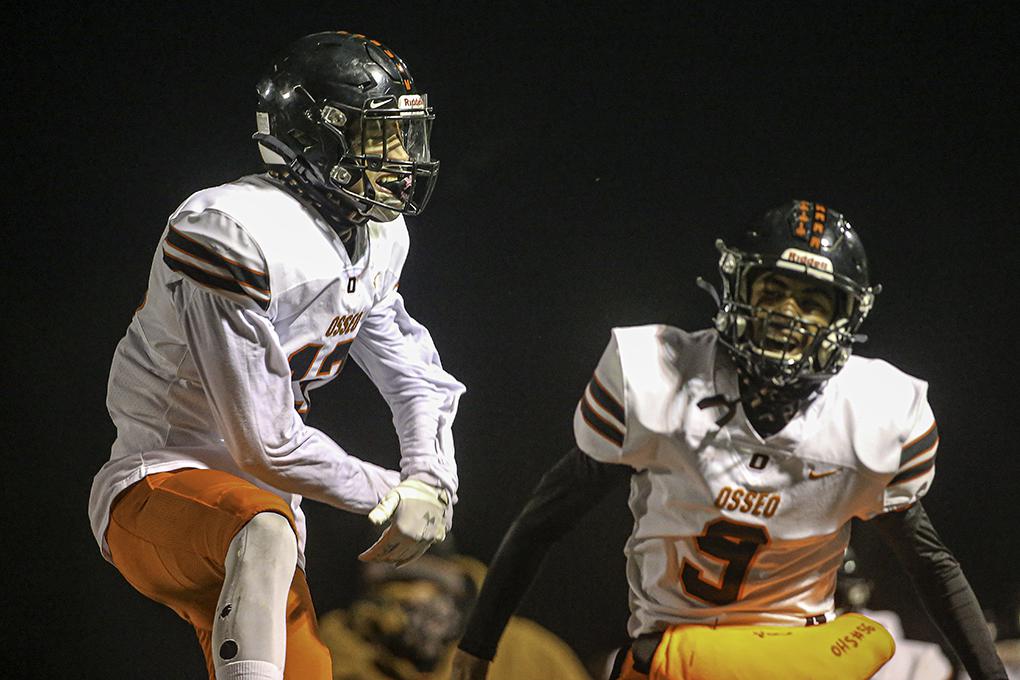 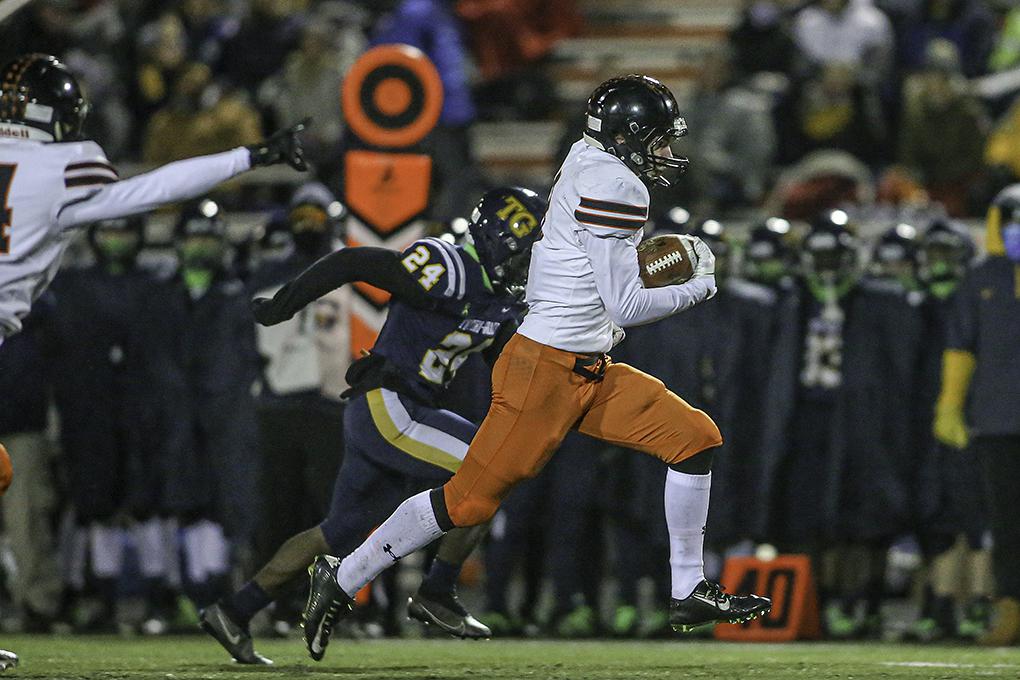 In any sport, you learn the most about teams and their top players when they’re faced with adversity. How do they respond after mistakes? What are they capable of when their back is against the wall?

Kenneth McKenzie of Osseo provided a resounding answer to those two questions in the Orioles’ 29-25 defeat of Totino-Grace at Osseo High School on Friday night.

Trailing 25-22 in the fourth quarter, faced with a fourth-and-8 in its own territory, Osseo coach Ryan Stockhaus dialed up a risky play to try and save the game: a pass from a running back.

“It kind of played into what we were doing the past couple weeks — very run heavy. It can be looked at as boring and methodical at times, but really we’re setting a lot of things up, setting up play-action, setting up plays like that,” he said. “We practiced it all week, we believed we were going to have to use it at some point. McKenzie is our backup quarterback — we know he can throw the rock.”

McKenzie certainly can throw, as his only pass attempt of the season connected for 30 yards to Alex Theisen to keep Osseo’s chances alive. The Orioles’ starting quarterback, Wyatt Doubler, followed that with a nice pass of his own — a 31-yard completion to Micheal Henderson to set up the game-winning TD by TJ Clay. 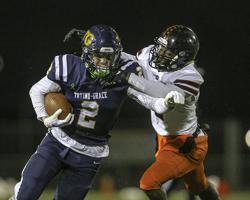 While McKenzie proved he is a capable thrower, he laughed at the notion of him possibly getting the starting job after the clutch completion.

“I don’t know about that,” McKenzie said. “Wyatt, he’s real nice — he really saved the game. He made plays at the end of the game when we really needed him.”

Even if he won’t be QB1 next week, it’s clear McKenzie has the running back role down — despite some early mistakes. McKenzie had two fumbles in the first half, which led to him getting more snaps at fullback in the second half. His temporary demotion from having active ball-handling duties led to more opportunities for Jacobe Jackson.

“He was frustrated, everybody was, but he was very frustrated,” Stockhaus said of McKenzie. “And you know what, we talked to him right away. I told him, ‘I’m putting you back in the game at fullback. We want you to get some of your frustration out in blocks and get some confidence back up cause we’re gonna need you at some point.”

McKenzie was needed. Jackson went down with an injury in the third quarter and McKenzie responded with arguably the clutchest play of the game. He also recorded a team-high 118 rushing yards.

As vital as McKenzie was in the Orioles’ victory, there was no doubt that the best player on the field Friday was the running back on the other sideline: Hunter Karlson. He was nearly unstoppable for the Eagles (1-2, 1-2), producing game-high 211 total yards of offense and all four Totino-Grace TDs.

While he had a few chunk plays to help him pass the 200-yard threshold, his consistency was the most impressive part of this performance. He averaged 6.9 yards per carry and he didn’t have a single play go for negative yardage the entire game.

The Orioles (2-1, 2-1) held one of Karlson’s late runs in the game for no gain, which was his only play that didn’t result in him gaining at least 1 yard.

Friday’s tilt had several twists, especially in the second half with six total touchdowns (four came in the fourth quarter), but maybe the weirdest part of the matchup was that Osseo was technically the road team despite playing on its home field. The game was moved Friday afternoon because of poor field conditions at Totino-Grace, leading to the unusual circumstances.

While it was technically an away game, it certainly seemed like Osseo had an energetic home crowd after the late Clay touchdown.

“Man, it was real fun. The energy was up, everybody was excited,” McKenzie said.

Despite playing on its home field, Osseo came away with a dramatic 29-25 road win over Metro North subdistrict foe Totino-Grace on Friday night.

The game seemed like it was going to be a defensive stalemate early, as the teams went into halftime tied 7-7. Both offenses came alive in the second half, however, as there were just three drives that didn’t result in touchdowns in the final 24 minutes. In total, six TDs were scored in the second half — four in just the fourth quarter.

The Orioles (2-1, 2-1) got an interception from Owen Dukowitz in the first half, who ran in for a 35-yard touchdown, and then a touchdown catch from Micheal Henderson and two TD runs from TJ Clay, including the game-winner.

The final TD drive was set up with two big passing plays. The first was a 30-yard completion from running back Kenneth McKenzie to Alex Theisen on a fourth-and-8. Then, Wyatt Doubler connected with Henderson for 31 yards to set up Clay’s 2-yard TD run.

Hunter Karlson did all of the scoring for the Eagles (1-2, 1-2), recording four touchdowns runs. He finished with a game-high 186 rushing yards and had 25 receiving yards.

Prior to Friday’s start, the matchup had been moved from the campus of Totino-Grace to Osseo due to poor field conditions. 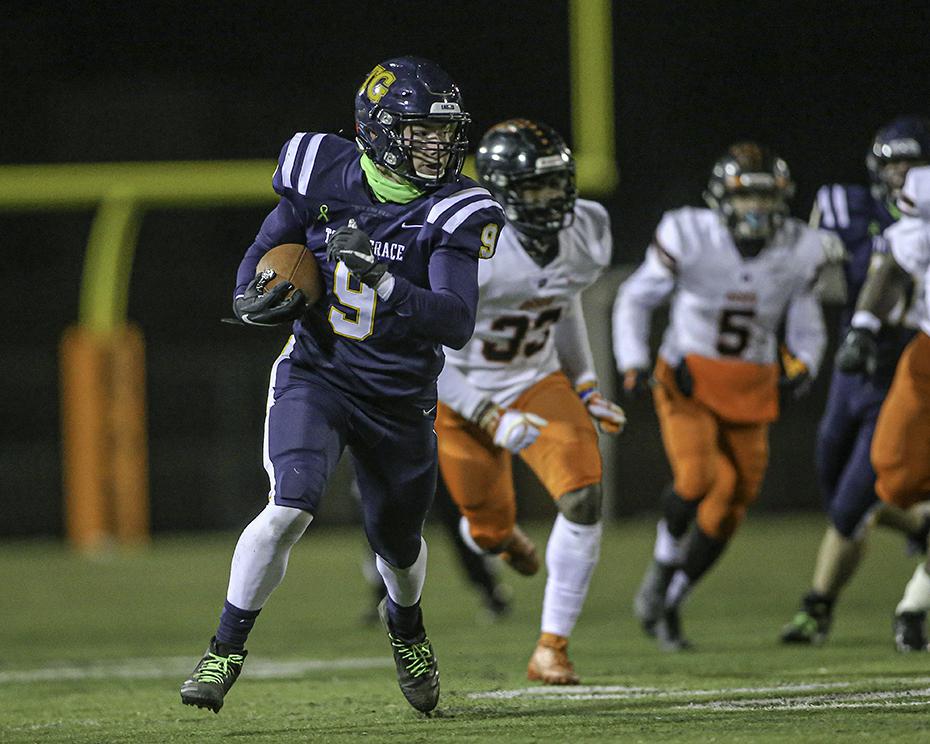 Sam Fretheim (9) of Totino-Grace leads a group of Osseo defenders on his way to a big gain on a short pass in the second half. The play set up an Eagles touchdown. Photo by Mark Hvidsten, SportsEngine