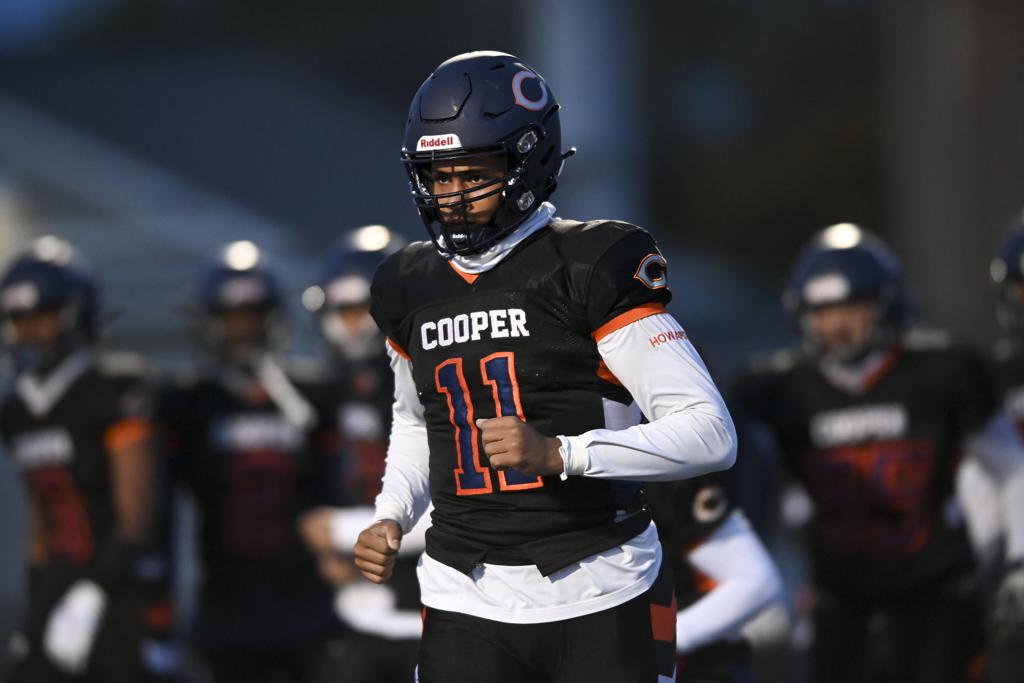 It’s a natural progression, following the path laid out by his father, Willie.

Now in his 11th season as Cooper’s head coach, Willie Howard played in the NFL as a second-round pick of the Vikings in the 2001 draft. A 6-4, 298-pound defensive lineman at Stanford, he was quick and explosive, blessed with immense strength and a relentless motor. As a junior he won the Morris Trophy, given to the top defensive lineman in the Pac-12 Conference.

Howard’s career was far shorter than anyone predicted. Midway through his rookie year, he was felled by a catastrophic knee injury. He tried to come back the next year, but his knee just wouldn’t allow it. He was released by the Vikings in 2003.

Now he’s also an assistant principal at Cooper, allowing him to hold sway over much more than football games. He knows that while football has been central to his life, he’s aware firsthand of how fleeting athletic careers can be. Football, in his view, is a briefly visited whistle-stop in life.

“It’s about being a leader, being a member of a community,” he said. “So many kids never play in college or get to play pro football. And it doesn’t last forever. Then what are you going to do?”

So far, Jaxon’s train is full-steam ahead in his quest play in college. With athleticism, intelligence and football-moxie of a coach’s son, he’s become the most sought-after college football player in state history.

He’s one of the few Minnesotans to land a five-star rating (by Rivals.com) and has an astonishing 42 Division I offers from schools in Power Five conferences, including Florida, Georgia, LSU, Michigan, Oklahoma, Oregon, Penn State, Texas ... you get the picture. Minnesota is in the mix as well.

His last two words make his father’s ears perk up. He takes the football development of his two sons, Phoenix Sproles and Jaxon, seriously. Phoenix, a junior wide receiver at North Dakota State, has had a significant hand in the development of his younger brother.

Jaxon tells a story about when he was in third grade “and my dad noticed I was playing soft. So in our front year, he had Phoenix stand there with his arms together and told me to hit him. I did and I was soft. My dad told me keep trying to run through him like I was hitting a brick wall.

“I did it, finally. My brother said, ‘You did it. Now we’re going to do this until you get like dad was.’ I look up to Phoenix.”

Getting to a point where he can compare himself to his father became a goal of Jaxon Howard’s once he realized his father’s football profile.

“I’d go with him to the Legends game at the Vikings Stadium and he’d go there and sign some stuff. I’d go ‘Dang, people know my dad,’ ” Jaxon said. “College coaches call me and say, ‘Your dad was a dog.’ At first, I didn’t believe them, I mean, he’s dad. He can’t be that big of a football player. I’m still waiting to see that, what do you call it, VHS tape?”

It’s impossible to hide Jaxon’s abilities on a football field. Last Friday Cooper’s opponent, Orono, spent much of the game running away from Howard’s side of the field, rare respect afforded a sophomore.

“I noticed they were audibling against me,” he said. “The biggest thing to do was keep working hard, running down plays.”

Said Willie Howard, “His nickname growing up was always ‘Mini-me’. He’s a monster on defense. He flies to the ball and wants to make every single play and that comes naturally. He had a knack for getting to the ball. On offense, he releases, he blocks well and his hands are unbelievable when the ball is thrown to him.”

What dad appreciates more, however, is Jaxon’s dedication to doing everything well.

“He’s everything we ask for in a Cooper Hawk. He’s the first one at practice and it’s not because I’m here,” Willie said. “Always the last one to leave. He cleans out the locker room, he’s a 4.0, straight-A student. He leads in his classrooms. That’s the expectations great players who have come through Cooper set. He saw that and knew that’s what he wanted to be.”

Willie asked him last year what he wanted to be when he got older. Jaxon responded with his goal of being an NFL player.

While many kids might find themselves ill at ease when mom and dad are around, Jaxon has embraced having his father at school.

“It’s real fun having him inside the building,” Jaxon said. “I’ll go into his office and bug him before my next class. It’s not just about being an athlete. It’s about academics, it’s about the community. I love the whole environment when I enter the school.”