Two long scoring plays in the fourth quarter lifted the Knights to a 21-14 victory. 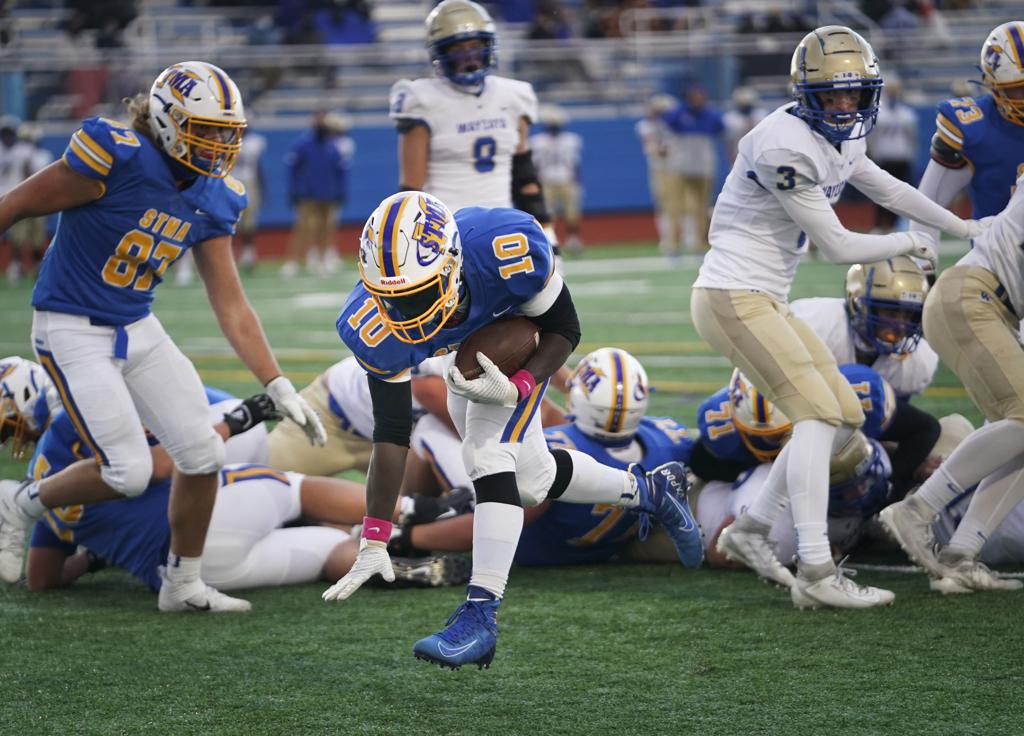 St. Michael-Albertville's David Collins scored his first touchdown of the game in the first half Thursday against Wayzata. Photo: RENEE JONES SCHNEIDER renee.jones@startribune.com

St. Michael-Albertville senior running back David Collins watched last Sunday’s Minnesota Vikings loss, the manner of which was on mind when Wayzata stopped him short of a first down near the goal line.

Nine seconds and 97 yards proved too much for the Trojans to overcome, however, as the host Knights prevailed with a 21-14 victory Thursday against the defending Class 6A Prep Bowl champions.

So, it’s time to forget Wayzata’s undefeated season. And disregard St. Michael-Albertville’s three-loss finish last fall as well. The Knights opened this season with their second consecutive victory while the Trojans are left to ponder an 0-2 start.

“I’m really thankful that we’re healthy and for the opportunities we’ve been given so far,” Collins said. “There’s more to continue.”

Late in the third quarter, however, Wayzata seemed in control. A fourth-down conversion was followed one play later by senior quarterback Ryan Harvey hitting junior receiver Julian Diedrich on a quick slant for a 26-yard touchdown and a 14-7 lead.

Then Trojans’ senior linebacker Hayden Davidson intercepted a pass attempt on the first play of the Knights’ drive. Wayzata took over needing 31 yards for another score.

Still, Wayzata took a 14-7 lead into the fourth quarter. Collins ensured the Trojans lost its grip on him and the lead. He appeared stopped before shaking defenders loose, dashing 64 yards and tying the game 14-14.

On the next drive, St. Michael-Albertville senior quarterback Jack Drobinski passed the ball to junior running back Max Keefer. He did the rest, outrunning the defense for a 74-yard touchdown and a 21-14 Knights lead.

“Credit to them,” Brown said. “We’ve got to do a better job of stopping them.”

“It’s not our effort,” Brown said. “It’s our finish. You have to have that internal belief and conviction that you’re going to find a way.”

In other words, Brown will have what St. Michael-Albertville is having.

“We’re a second half team,” Collins said. “While the other team is getting tired, we’re just getting started.”

As he did on Sunday night, Collins walked away pleased.

Collins is also a fan of the teammate who ended Thursday’s game with an interception: Senior defensive back Owen Vike.

Two long fourth-quarter touchdowns – one a 64-yard run, the other a 76-yard passing play -- gave St. Michael-Albertville a 21-14 victory over Wayzata.

David Collins scored on the 64-yard run, his second touchdown of the game, with 10:47 to play Thursday, tying the game at 14-14. Less than two minutes later, the host Knights’ Jack Drobinski connected with Max Keefer on a 76-scoring pass to give them the lead.

The teams were tied 7-7 at halftime. Collins put the Knights (2-0) ahead 7-0 on a 1-yard touchdown in the second quarter. Wayzata tied it before halftime on a 3-yard run by Anthony Richmond.

The Trojans (0-2) took a 14-7 lead in the third quarter when Ryan Harvey connected with Julian Diedrich on a 26-yard passing play.