Kaleb Skelly recorded a pair of interceptions, helping the Panthers shut out the Knights to keep The Block, a prized rivalry trophy, on campus another year. 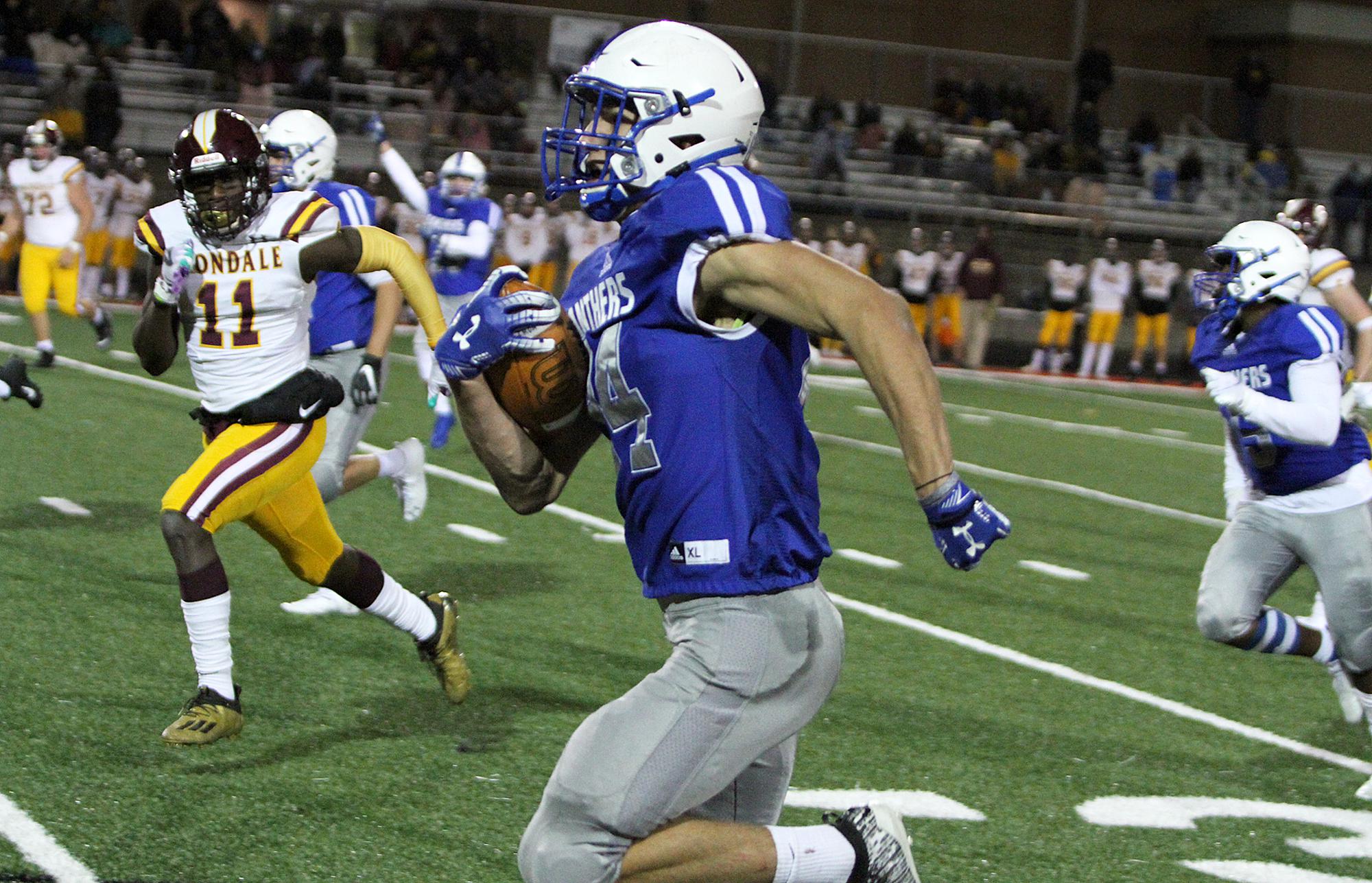 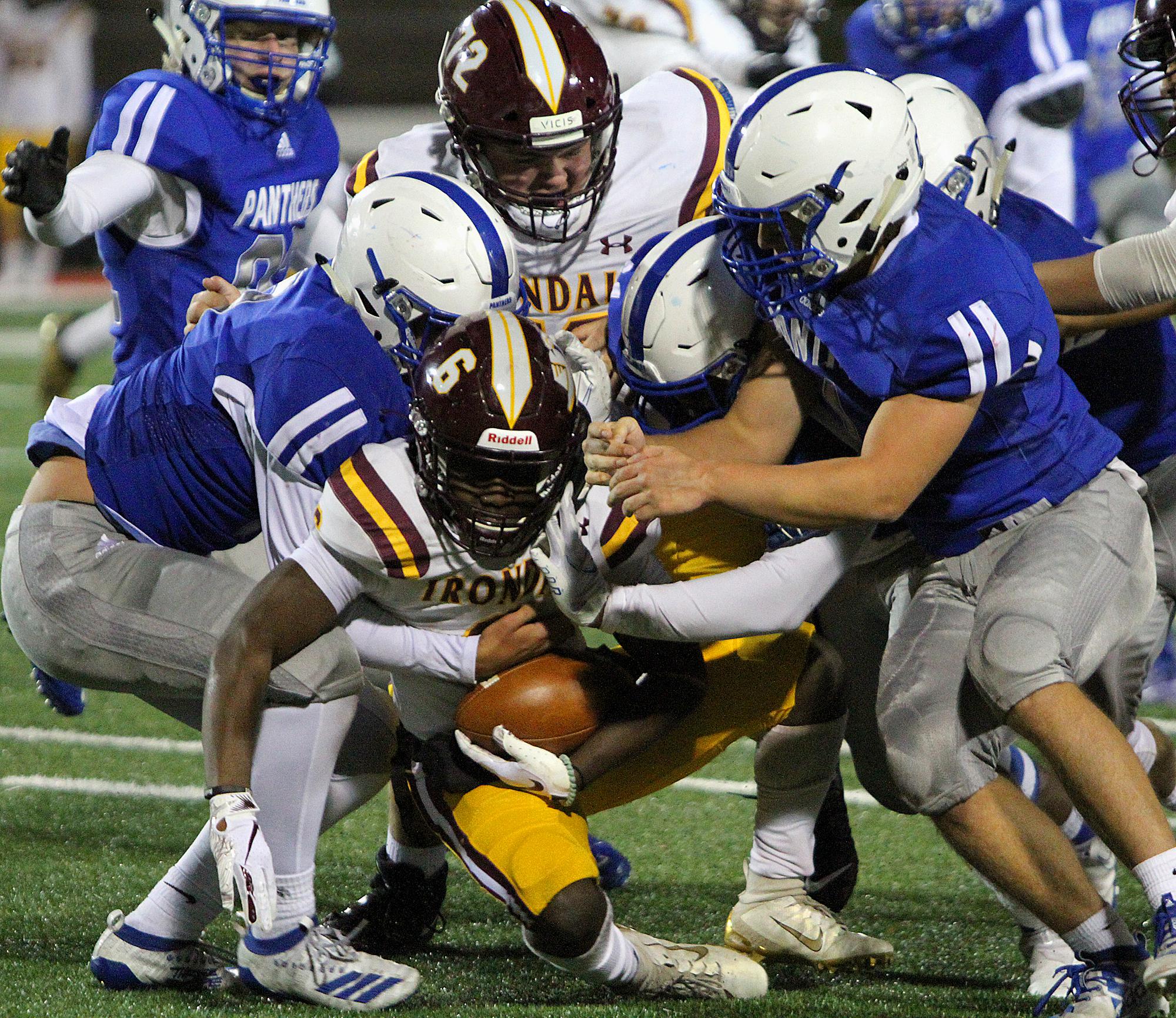 The Spring Lake Park defense swarms to the ball and brings down Irondale's Reuben King in the second half Friday. Spring Lake Park evened its record at 1-1 with a 28-0 shutout over rival Irondale. Photo by Drew Herron, SportsEngine

Spring Lake Park clashes with Irondale in a matchup for The Block every year, a rectangular trophy, with a handlebar across the top, that’s meant to sit horizontal when idle. The trophy symbolizes the rivalry between the Suburban Blue subdistrict teams, with “Spring Lake Football” stamped on one side and “Irondale Football” marked on the other.

The Block is staying with the Panthers for a third straight year, as a total team performance on defense led to Spring Lake Park shutting out Irondale 28-0 on Friday at Spring Lake Park High School.

“A great game on defense — certainly improved on offense. I think from Week 1 to Week 2, with ball security, we made some improvements,” said Spring Lake Park coach John Stewart.

The Panther defense stifled Irondale (1-1, 1-1) throughout the contest, with the Knights struggling to get the ball past midfield. Irondale quarterback Jack Zupfer, despite completing 14 passes for 142 yards, threw three interceptions — two of them to Kaleb Skilly.

Skilly, a 6-foot-4 senior, plays both sides of the ball for Spring Lake Park (1-1, 1-1). In addition to his interceptions, he caught two passes on offense to record 36 yards receiving. 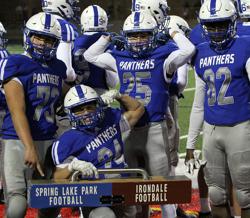 “Kaleb’s a special player,” Stewart said. “It’s so fun to watch him run around on defense and cause havoc, and be able to use him as a receiver.”

Stewart added that Skelly has that knack for getting the ball.

“I really like how he’s embraced being a defensive player — he’s a stud over there,” Stewart said.

Skilly returned his first interception nearly 40 yards before being pushed out of bounds, setting his team up with possession of the ball in the red zone.

“We had been working on that one all week,” Skelly said. “The second guy was coming in, I just read the quarterback’s eyes and made the play.”

Three plays later, Panthers quarterback Aaron Clausen found the edge to score from 6 yards out to give the Panthers a 21-0 lead midway through the third quarter.

“He’s a very dynamic player,” Clausen said of Skelly, adding he’s a guy you can count on in certain situations.

Offensively, Spring Lake Park moved the ball, finishing with 307 total yards of offense — 226 of which came on the ground.

Senior Henry Dennis finished with 68 yards rushing on a game-high 12 carries for two TDs, while Aaron Payne tacked on a touchdown and 72 yards rushing, thanks to a 44-yard pitch-and-run play in the second half.

Clausen added 81 yards through the air, and also ran for 24 yards to orchestrate his team’s offense.

“He stepped up this year for sure,” Skelly said of Clausen. “He’s learned how to lead.”

The triumph indicates Spring Lake Park keeps The Block for another year, something the team had strived and prepared for the past week.

“This whole week, we’ve been bringing The Block out to practice and on the field to look at it,” Clausen said. “It brings the vibe up for sure, and helps us bounce back.”

It may just be a rivalry trophy, but any symbol of the team’s first win of the year gives Stewart a positive outlook going forward.

“It’s fun to have the traveling trophy, to prepare all week and then go out and play a great game.”

Spring Lake Park (1-1, 1-1) scored one rushing touchdown in each quarter and was in control for the entirety of this rivalry matchup.

Running back Henry Dennis ran for 68 yards and two TDs to lead the Panthers’ ground attack, while Kaleb Skelly, who plays wideout and safety, caught two passes on offense, recording 36 yards. Skelly also came down with two interceptions on defense.

Quarterback Jack Zupfer completed 14-of-24 passes for 141 yards for the Knights (1-1, 1-1), who struggled to get past midfield all night. Irondale’s Gabe Kasper caught seven passes for a game-high 83 yards.

With the win, the Panthers keep The Block, a rivalry trophy between Irondale and Spring Lake Park — schools that are located just four miles apart. 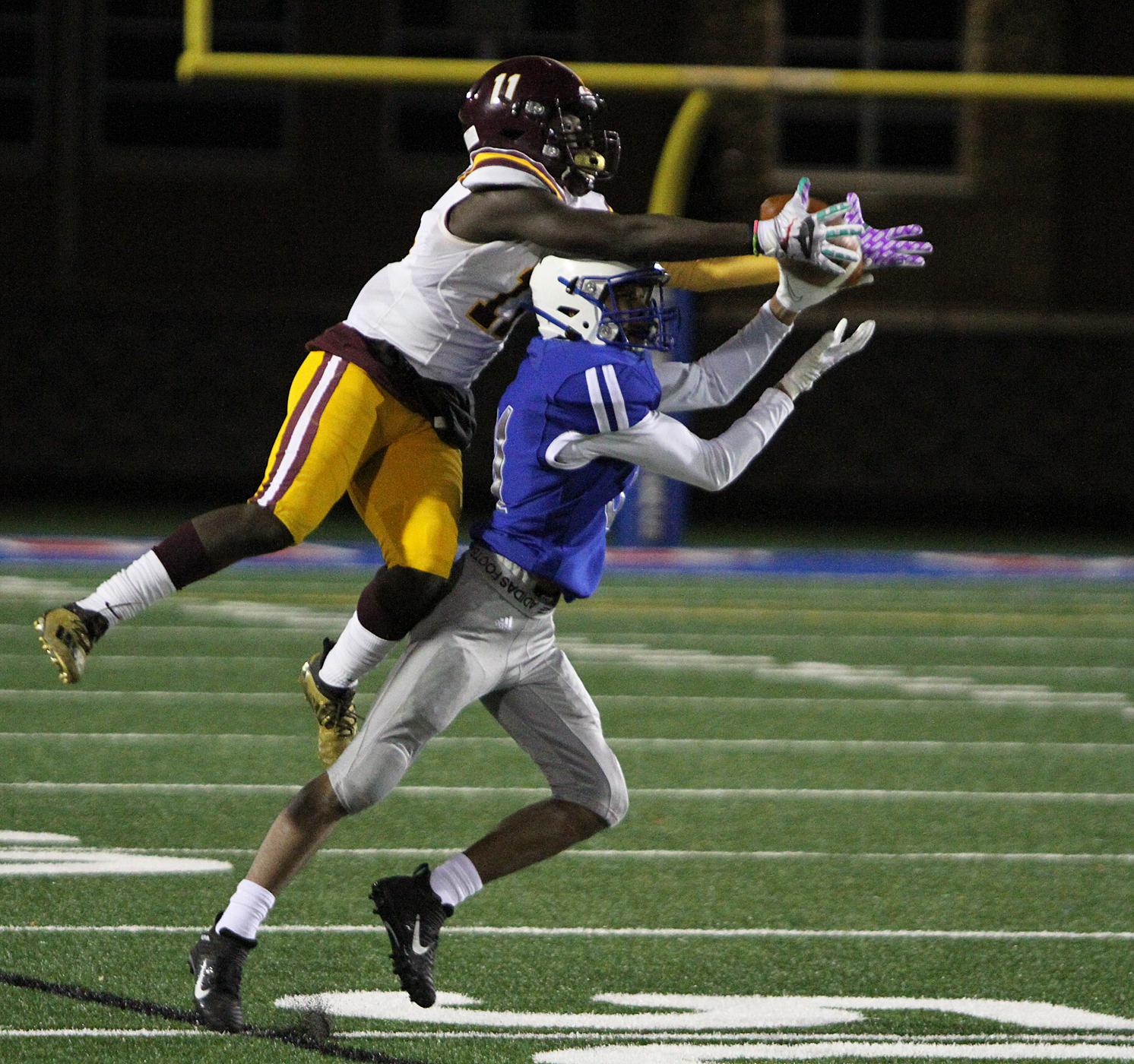 Spring Lake Park defensive back Tossy Johnson-Kelly and Irondale receiver CJ Ritchie fight for a ball in the flat during the fourth quarter. The pass fell incomplete. Photo by Drew Herron, SportsEngine