While the dearth of fans made for a subdued vibe Friday evening, it also amplified what was being yelled on the field and from the stands. But it felt good to be back 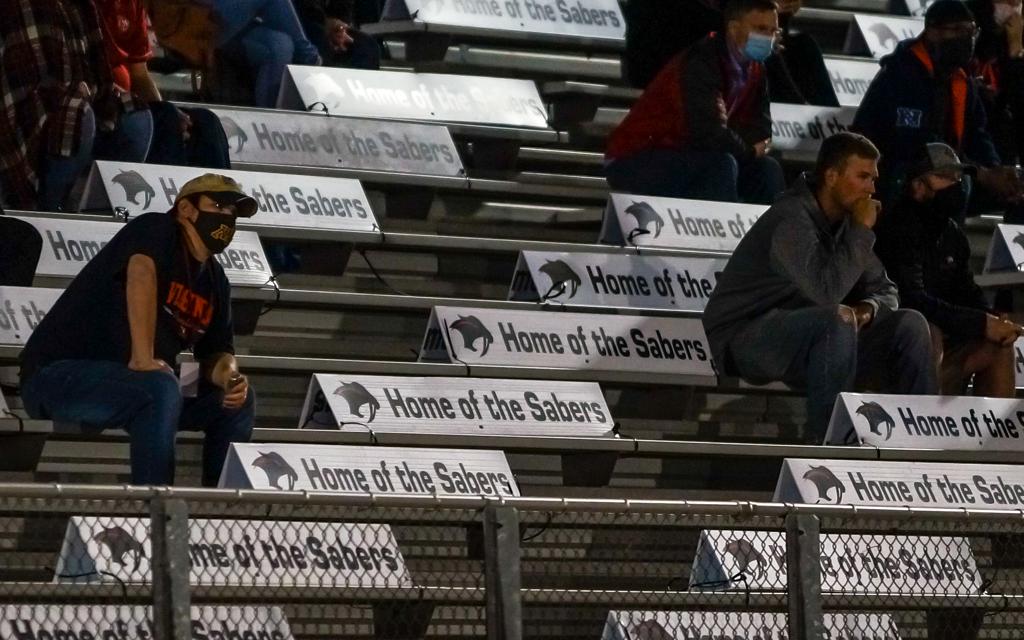 On a beautiful Friday evening for high school football in Minnesota, kids horsing around behind the bleachers were as hard to find as an open concession stand.

All across the state, where about 150 games were played and as many as 10 were not because of COVID-19, the vibe was, in the words of one metro area assistant coach, “like a souped-up 10th-grade game.”

At Eastview in Apple Valley, cutouts of students’ faces joined the allotted maximum of 250 fans in the bleachers. A few miles away in Shakopee, permanent seat markers boasting “Home of the Sabers” were spread across the bleachers to enforce social distancing as the team played St. Michael-Albertville.

That made it easy to hear not only players yelling on the field but also the pleadings of individual fans.

During the Minneapolis North vs. St. Anthony game at Northwestern University in Roseville, a couple of leather-lunged Polars supporters, 30-something in age, sat in the front row. And with these gents, it wasn’t “DEE-fense, DEE-fense,” it was, “You better get in there and make that tackle [fill in blank].”

Pandemic guidelines make “staying behind the line” more stringent for coaches and players. The referee in charge did not respond to Adams’ high-volume inquiry.

At halftime of the Champlin Park-Centennial game, neither team was allowed locker room access. To ensure lower numbers of players in any one area, both teams split their squads. Home team Centennial’s guys sat on wooden benches on the edges of two shot put sectors on the stadium’s west end. Champlin Park players met on the grass near their blue equipment bags or around the sideline bench area.

Last Saturday, Centennial players practiced standing on the sidelines to ensure sufficient distance between them.

“It’s the least amount of actual football coaching I’ve been able to do,” Cougars coach Mike Diggins said. “More time has gone into figuring out different solutions to meet the safety requirements.”

Diggins joked about one home-field advantage Friday: “They got two porta-potties. We got three.”

Eden Prairie coach Mike Grant sat on a piece of equipment on the sidelines at Minnetonka, masked up and shaking his head before the game.

“I don’t know why we’re doing this,” the 11-time state championship-winning coach said. “I voted no. It’s not the players. It’s not us I’m worried about. It’s everyone else.”

Looking across the field, he saw others in pregame preparations without precautions.

After the Eagles’ 34-7 victory, running back Johnny Hartle admitted finding the atmosphere unusual, and peaceful.

“Probably the first game in my career where I wasn’t nervous,” Hartle said. “It might have been because there were limited fans. I was just excited. It was so nice just to get back on the field.”

Out in tiny Verndale, Mike Mahlen extended his seemingly untouchable record. The winningest coach in state history began his 52nd season as a high school coach with a 22-8 victory over Wheaton/Herman-Norcross. Mahlen’s career record is 402-124-3.

Becker and Spring Lake Park played each other barely 24 hours after each team thought it would be idle weekend because opponents with COVID restrictions canceled at the last minute. Turned out to be a pretty good game, with Becker winning 20-13.

Two teams in the same pickle — Mankato East and Worthington — played Saturday. Both lost their opponents to COVID, then found each other, a win-win even before the kickoff.

Joel Swanson can relate to the virus part. He coaches Kasson-Mantorville, which was supposed to play Mankato East. He spent Friday in quarantine, with the rest of his team, after two positive tests emerged.

Instead of working the sidelines, Swanson was at home seeking out games being streamed. “Once a coach, always a coach,” he wrote in an e-mail dotted with smiley face emojis. “I need to stay sharp.”

He also offered advice to his coaching peers, who know more COVID cancellations are likely in the weeks ahead and that their teams could be next.

“Savor the time together with your team and teach the players about not taking things for granted. … Instead of looking at this ‘you are missing out on,’ be thankful for any opportunity we get.”