The Rebels scored three touchdowns in the final quarter on runs by Cade Fitzgerald, Shawn Shipman and Darius Givance for a 38-21 victory. 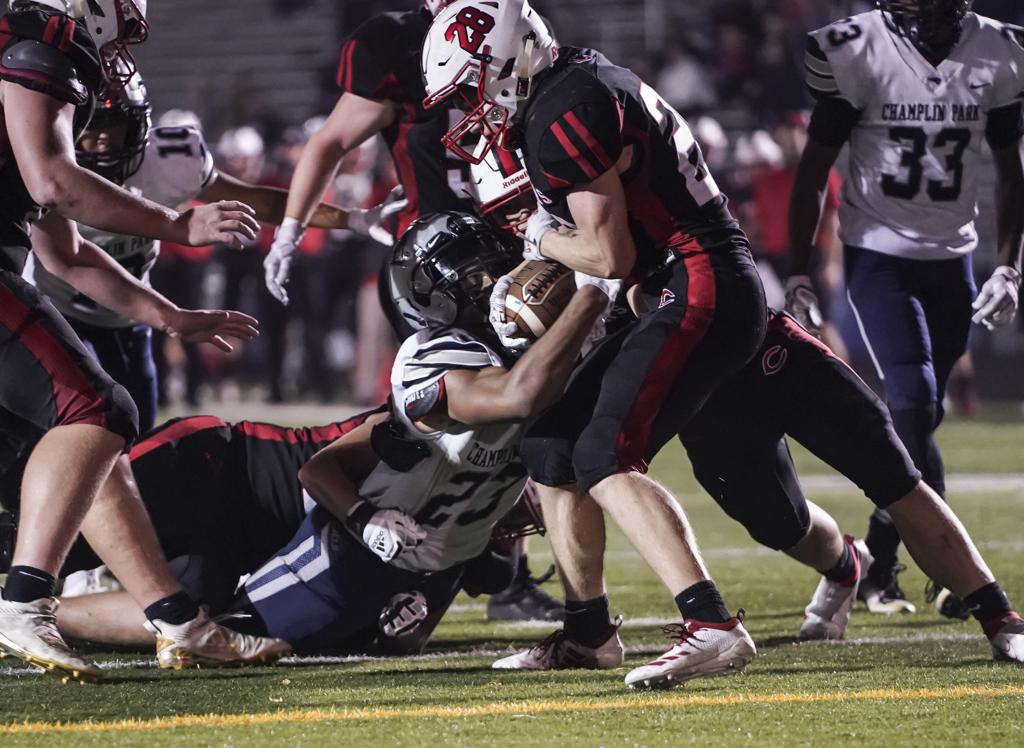 Sure, Champlin Park’s football opener Friday felt different. A year ago, the Rebels suffered a one-point loss at Centennial, their lone setback until the Class 6A Prep Bowl.

This time, a 38-21 victory on the Cougars’ field jump-started a season unlike any before, one almost pushed to the spring of 2021.

Sure, the COVID-19 era meant its share of oddities. Face coverings. Limited crowds. No pep bands. But it didn’t take long for Champlin Park players and coaches to focus on the game.

Safety talk is what followed a blocked punt by Hayden Sanders for two points to break a tie and give the Rebels a 16-14 halftime lead.

“I told our offense that I thought we would put up 40 points,” Champlin Park coach Nick Keenan said. “Our offensive line is huge. When we had our blocks, our guys were gone.”

Shipman’s long scoring run and the Sanders’ safety appeared to shift the momentum. But Centennial fought back, going ahead 21-16 on Lance Liu’s third-quarter touchdown run.

“It meant the world,” Shipman said of getting to play again Friday. “We knew that now we have our opportunity to shine.”

Last year’s game, Keenan recalled, featured packed bleachers. On Friday, the teams split the allotted 250 tickets, the limit at all games. That meant “not even all our parents could be at the game,” Keenan said.

The Rebels’ faithful resembled their team’s spread offense, fanning out over a 30-yard span in the visitors’ bleachers. By comparison, Centennial’s fans were in a goal-line formation, packed into a 10-yard area near midfield.

The concession stand sat vacant all night. At halftime, the turf field did as well. Fans deprived of a high-energy dance team performance found reason to cheer as an impromptu firework display by an unknown neighbor provided a few bursts of color above the stadium’s north side.

No bands played but Champlin Park had its cheerleaders.

Before the game, players had more on their minds than the coronavirus pandemic. On Champlin Park’s sideline, 41 players knelt during the national anthem as a form of protest against injustice. All of Centennial’s players remained standing.

During the game, most of the nonparticipating players on both teams wore masks on the sidelines. Coaches sometimes shouted “spread out!” in place of the typical reminder to back away from the playing field.

Aware of myriad changes players will face throughout an abbreviated six-week regular season, both coaches kept the emphasis on staying dialed into what happens on the field.

“We’ve told our kids, ‘Move on,’ because everyone is dealing with changes this season,” Centennial coach Mike Diggins said before the game.

Keenan said he enjoyed the moment when “I put my headset on and in that instant, it was Friday night football again.”

Trailing going in the fourth quarter, Champlin Park rallied with three rushing touchdowns to defeat Centennial 38-21 in the teams’ first game held in the delayed 2020 season.

The Rebels led 16-14 at halftime on a safety from a blocked punt by Hayden Sanders.

Centennial, playing at home, took the lead in the third quarter on 5-yard touchdown run by Lance Liu.

But Champlin Park came back, getting a 31-yard scoring run by Cade Fitzgerald, followed by a 9-yard score from Shawn Shipman and a 2-yard touchdown from Darius Givance.