COVID-19 restrictions have made 2020 the wrong season for greatness, something the Polars aspire to with a roster that its quarterback calls the greatest in school history. 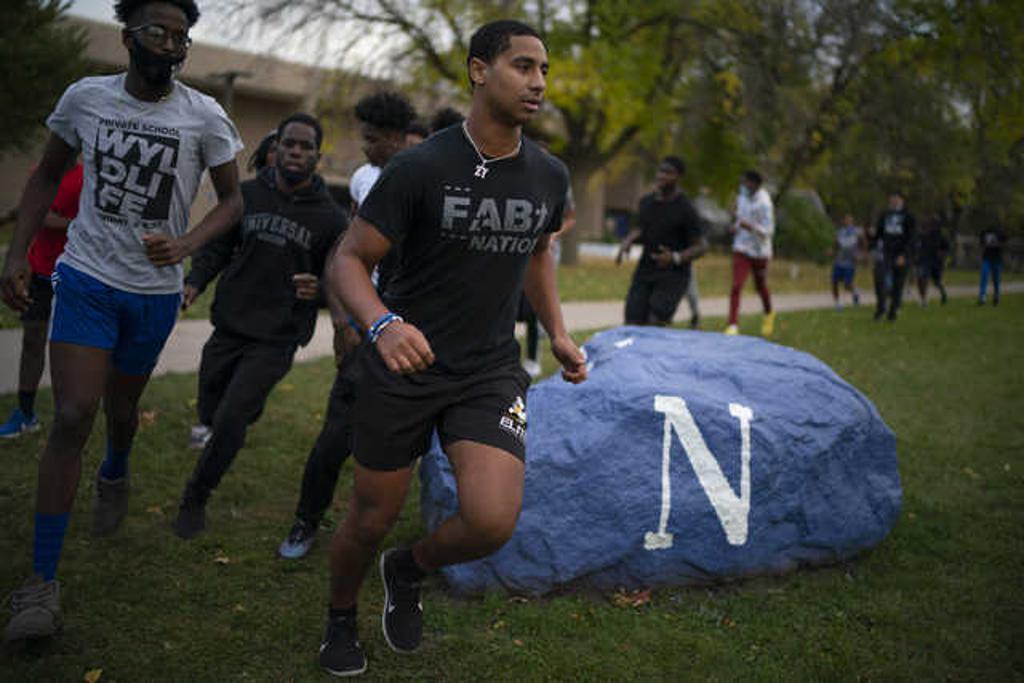 Minneapolis North quarterback Zach Yeager and the rest of the team jogged around the school yard after lifting weights and taking part in a walk through Monday at their school. Photo: JEFF WHEELER • jeff.wheeler@startribune.com

It’s all love when Minneapolis North quarterback Zach Yeager looks ahead to a shortened senior season.

He lauds this Polars team as the greatest in school history. He savors the chance to grind out one of the state’s toughest schedules. A hint of longing creeps in, however, when Yeager tries rationalizing the lack of a proper state tournament this fall.

Coronavirus precautions have made this the wrong season to be great. To mitigate travel among teams and potential virus transmission, Minnesota State High School League leadership permitted a section playoff and nothing more. No Prep Bowl. No individual champions by class.

Every team has been affected. But not every team has North’s potential to compete for the Class 2A state title they believe was in their grasp. So, they recast their visions.

“It would have been a huge year for us,” said Yeager, before quickly adding, “I mean, it’s still is a huge year. It’s my senior year and you can’t redo it. We can’t win a state championship, but if you win every game you play, you did the best you possibly could.”

A six-game regular season begins Friday against St. Anthony at the University of Northwestern in St. Paul. The strongest schedule coach Charles Adams III can recall offers weekly excitement despite the abbreviated season.

“If you get an opportunity to showcase yourself for whatever amount of games they give you, take that for what it’s worth,” Adams said. “They’re embracing that.”

The Polars, a juggernaut riding six consecutive state tournament appearances, won’t roll through overmatched Twin Cities teams this time. Their upcoming opponents finished a combined 49-16 last season. Two of them, played in the state tournament. Even Providence Academy, the lone team with a losing record, reached a section final.

Consecutive games against the SMB Wolfpack and Fridley — two teams in the Class 4A state tournament last year — in Weeks 4 and 5 are personal for North players engaging in a little smack talk on group text messages with friends on those teams.

“There are a few teams on the schedule that we’ve been wanting to play for a few years now,” said senior running back Terrance Kamara, who ran for 2,369 yards and 33 touchdown last season. “Now we get the chance, so we might as well beat them up and show the whole state that it doesn’t matter what class you’re in. We’ve got ballers and we’ll play anybody.”

The motivation to win every game began with last season’s shutout loss to Caledonia in the Prep Bowl. A rematch is impossible this season, but the Polars are trying to control what they can.

“The intensity is going to be high because we’ve still got something to prove — to win every game and end our season with our heads up, not down,” senior defensive end Davon Townley said. The two-sport standout also endured the basketball season getting canceled in March on the morning of the Polars’ section championship game.

Other challenges exist this season. Games at North will be played on a newly renovated field, complete with field turf and lights. But the school district is not allowing fans at home games.

Adams, a 1999 North graduate, lamented that “not having any fan support is tough” but applauded St. Anthony for giving 75 of its 250 allotted tickets for Friday’s game to North.

For a community dealing with coronavirus worries coming off a summer of civil unrest, football offers a few hours of respite.

“Our end goal is going undefeated for whatever amount of games they give us,” said Yeager, who has made a verbal commitment to North Carolina A&T. “Just like it would have been if we were trying to win a state championship.”