The Tigers made sure senior night would be a success in a pandemic-shortened season. 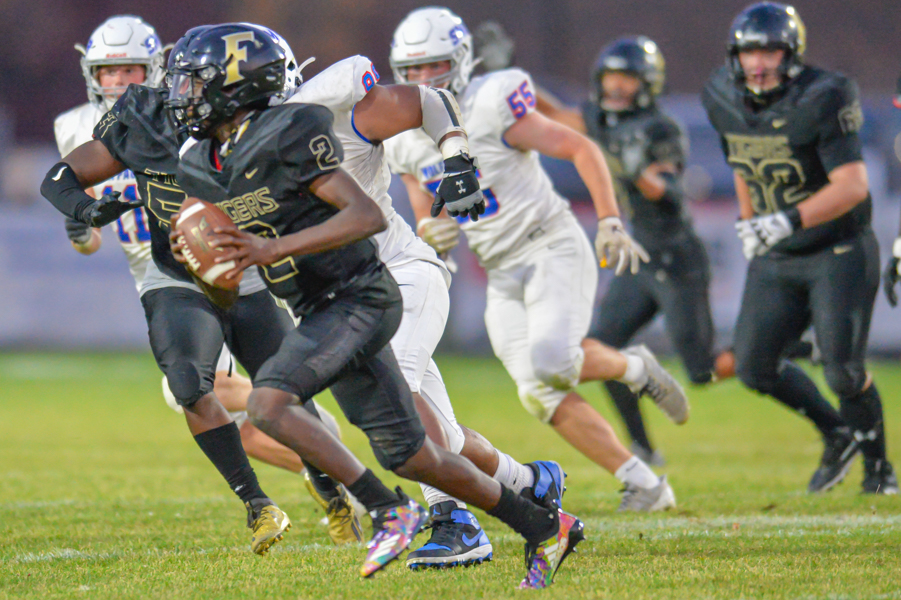 Fridley’s Tra’Vione Stevenson ran for 9 yards late in the first half, giving the Tigers their first touchdown. Fridley went on to defeat the Wolfpack at home 14-0 Friday night. Photo by Earl J. Ebensteiner, SportsEngine 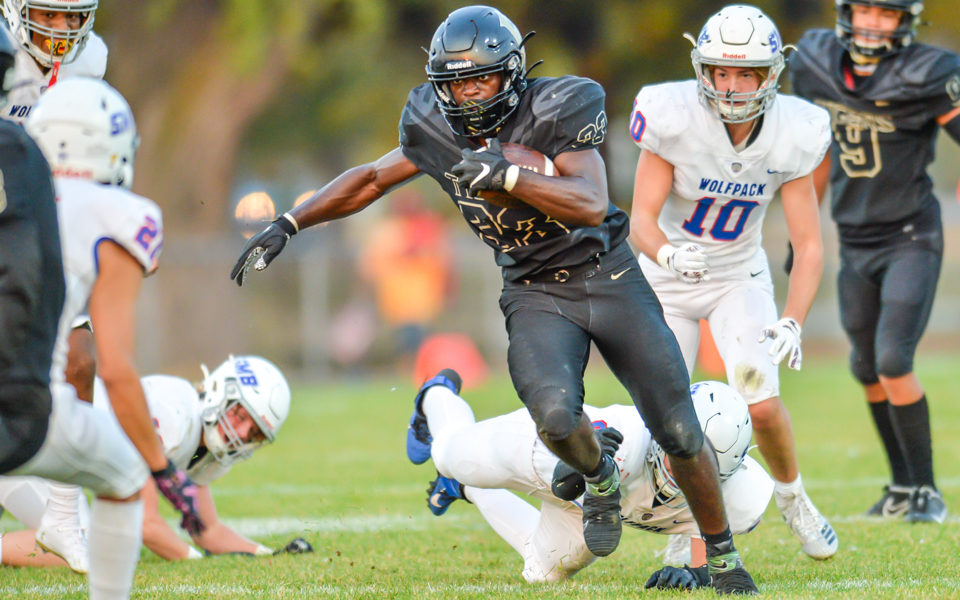 The Tigers’ Michael Ude breaks a tackle Friday night in a 14-0 win over SMB in the season's opening game. Photo by Earl J. Ebensteiner, SportsEngine

It wasn’t a standard senior night at Bob O’Neill Field on Friday.

For one, Fridley held its annual halftime ceremony honoring the Tigers’ elder statesmen in the season opener — as opposed to the regular-season finale.

Another difference Friday was the end result, as Fridley defeated SMB, a co-op of St. Paul Academy, Minnehaha Academy and Blake, 14-0 for the first time in three meetings in a Twin City Maroon Subdistrict tilt.

“I think our kids went through so many ups and downs. Are we going to play a season, are we not going to play a season?” said Fridley coach Justin Reese. “I think coming into this game the most important thing I told our players and our seniors is have fun. We don’t know what’s going to happen. That’s why I made senior night the first game of the season. Why not make it against SMB, which is a great program?”

The Wolfpack defense put together two fourth-down stops to keep the Tigers scoreless in the first quarter. Fridley had the yardage advantage all night, though, and finally got on the scoreboard in the second quarter. 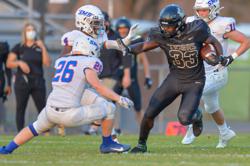 Senior Tra’Vione Stevenson called his own number on a 9-yard scamper up the middle to make the score 7-0 with 4 minutes, 35 seconds left in the quarter.

“It felt great, to be honest,” Stevenson said of playing Friday. “I know my team had my back. [Last year’s starting quarterback Kaleb Blaha] taught me a lot. We’ve also got a lot to improve on.”

The 7-0 score stuck until the second half of a matchup between a pair of 2019 Class 4A state tournament entrants. The Wolfpack, state champions in 2018, were just shy from repeating last fall. They lost to Rocori 22-21 in the championship game. Fridley, meanwhile, was a quarterfinalist in the tourney.

The Wolfpack look a lot different this year without Jalen Suggs, their star from the last couple seasons who was the 2019 Associated Press Player of the Year. The coveted former quarterback is now on a basketball scholarship at Gonzaga after graduating from Minnehaha Academy last spring.

The second setback involves freshman Merrick Woods, who was thrown into the fire under center with one day of practice taking reps with the varsity. A stingy Fridley defense limited SMB to under 50 yards in the first half. To make matters worse, Woods was injured on the second play from scrimmage in the second half on a scramble to the outside. He remained conscious but had to be taken off the field on a stretcher to an ambulance.

Play resumed after approximately 10 minutes with senior Rob Grace taking over for Woods.

“It was pretty rough not having our quarterback,” said SMB coach Chris Goodwin. “Then we were down to a guy who never played quarterback at all. He’s a wide receiver.”

Grace led the Wolfpack to a pair of first downs before penalties stalled the drive short of midfield. Flags were costly throughout the night for SMB.

The Tigers scored on their first drive of the second half on a six-play, 72-yard drive. Stevenson connected with Zach Gotsch from 5 yards out.

Gotsch was also important in the rush game behind starter Michael Ude. Ude powered his way to 66 yards on 12 carries to go with a 13-yard reception in the first half. But Ude left the game in the third quarter with an injury suffered while playing defense.

“Michael got going early,” Stevenson said of his senior classmate. “The defense focused on him, and that opened up the running game for me and the passing game.”

Gotsch had seven carries in the fourth quarter to help drain time on the clock. Stevenson and the Tigers didn’t throw a pass in the final 12 minutes.

Fresh faces in the linebacking core allowed Ude, Stevenson and Gotsch to each break off big runs.

An abbreviated preseason and little tackling in practice made for a tough challenge for a young roster which Goodwin believes has the talent to jell into another winner.

“We normally have those scrimmages before a first game. The amount you improve in those before your first game is monumental,” Goodwin said. We’ll come back and we’ll still have a great season.”

Reese couldn't praise his seniors enough for making Friday’s outcome possible — even if only a limited crowd of 250 people were onsite to see it due to COVID-19 guidelines.

“This is a group of seniors who were fortunate to play on some great teams as freshmen, sophomores and juniors,” Reese said, referencing a 25-8 record since 2017. “They had great leadership behind them and now they’ve taken on that senior leadership role. Seeing the guys over the years, especially going into the first game and now we’re in a pandemic. So it was about keeping the focus against a tough team.

“We can hang our hat on that.”

A pair of 2019 Class 4A state tournament teams met to open the 2020 season Friday evening.

Fridley (1-0, 1-0) controlled the first half, logging 186 yards of offense compared to just 36 from the Wolfpack, but the Tigers took only a 7-0 lead into the halftime break. SMB (0-1, 0-1) managed to keep the game close with its defense, which got off the field with two turnovers on downs before Fridley scored.

Quarterback Tra’Vione Stevenson capped a nine-play drive with a 9-yard rush up the gut with 4 minutes, 35 seconds until halftime. Mya Karsten converted the extra point.

Less than two minutes into the second half, Wolfpack freshman quarterback Merrick Woods left the game with an injury. He was replaced by senior Rob Grace, who led the Wolfpack to a pair of first downs on his first drive before penalties derailed momentum.

The Tigers made it 14-0 when a six-play, 72-yard drive ended with a 5-yard touchdown pass from Stevenson to Zach Gotsch with 4 minutes, 26 seconds left in the third quarter. 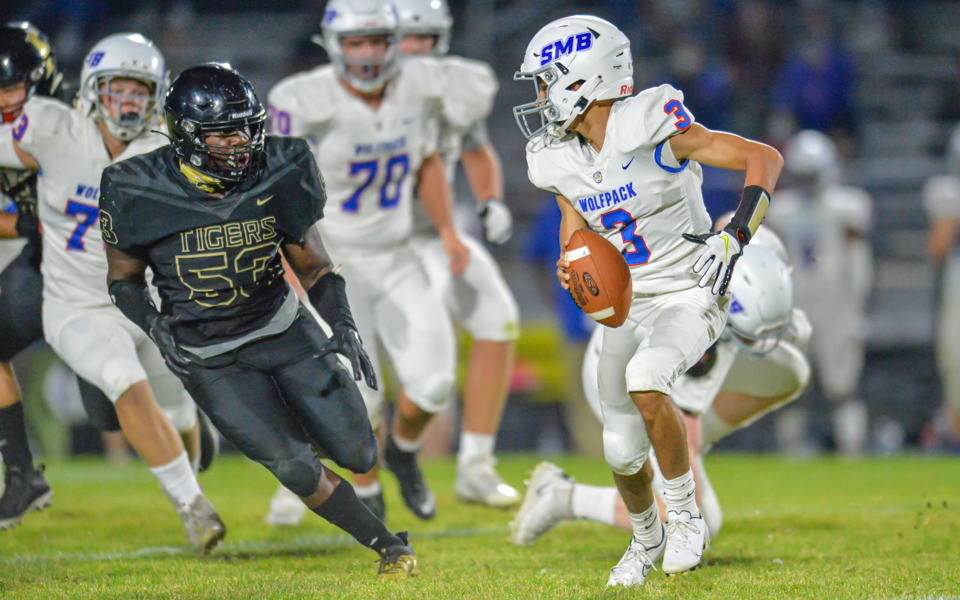