But the Saints surpassed all expectations by winning the North Suburban Conference. 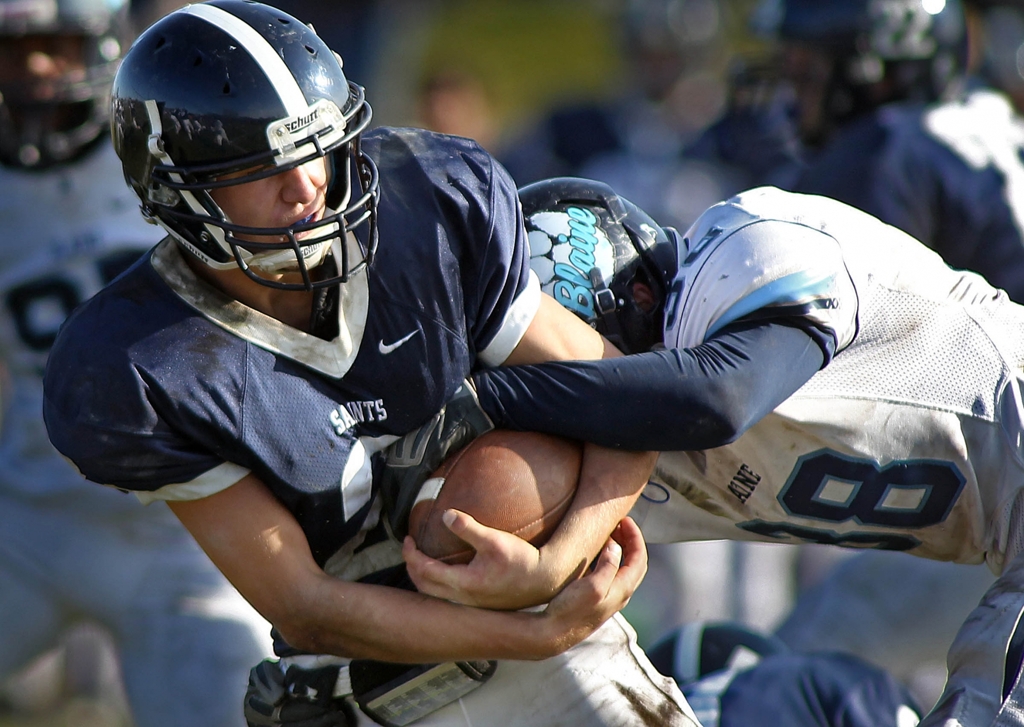 St. Francis quarterback Warren Bauman (left) was unable to escape the grasp of Blaine's Nicholas Plankers in second half action of Saturday's game.

Chris Lindquist was feeling the burn that coaches across the state feel following the loss that ends their season.

The St. Francis football coach had witnessed a dismantling of his team by Blaine in the Class 5A, Section 7 semifinals, bringing to a painful close a season in which the Saints had surpassed all expectations to become North Suburban Conference champions.

Lindquist didn't make excuses for the 43-7 loss. He truly believed St. Francis, the section's smallest school with 1,504 students, could make a game of it with Blaine, the section's largest school (2,551 students) and one with a well-earned reputation for football excellence.

"We watched film on them," Lindquist said. "They had trouble against the run and that's our forte. But, for some reason, it didn't happen."

What made the loss sting all the more, Lindquist said, was that the Saints' breakout season came a year before the Minnesota State High School League adds Class 6A for football. It will feature the state's 32 largest schools, which includes Blaine.

St. Francis will stay in Class 5A.

"We don't get the kind of athletes that a school like Blaine has," he reasoned. "We don't have players like [Blaine quarterback] Duke Anyanwu, guys who are 6-foot-4 and 220 pounds and is elusive and can run like he can."

It wasn't a complaint so much as an observation: A team can scheme and prepare endlessly, but in the end, it's the players who drive the bus.

St. Francis' 7-1 regular season might have earned it the No. 2 seed in Section 7, but Saturday it was definitely a significant underdog.

"We get manhandled when we play schools that big," Lindquist said. "You might be able to compete once in awhile, but it usually doesn't happen."

Blaine graduate up for NASCAR award

Bill Morrison, a 2009 Blaine graduate and now a junior Business Management major at the University of Central Florida, was recently selected as one of five UCF students to participate in the NASCAR Kinetics: Marketing in Motion program. The program teaches business skills for their career after graduation.

Case studies from the 20 participating NASCAR Kinetics teams are being judged. The winning team wins a trip to the NASCAR Sprint Cup Series finale at Homestead-Miami on Nov. 20.