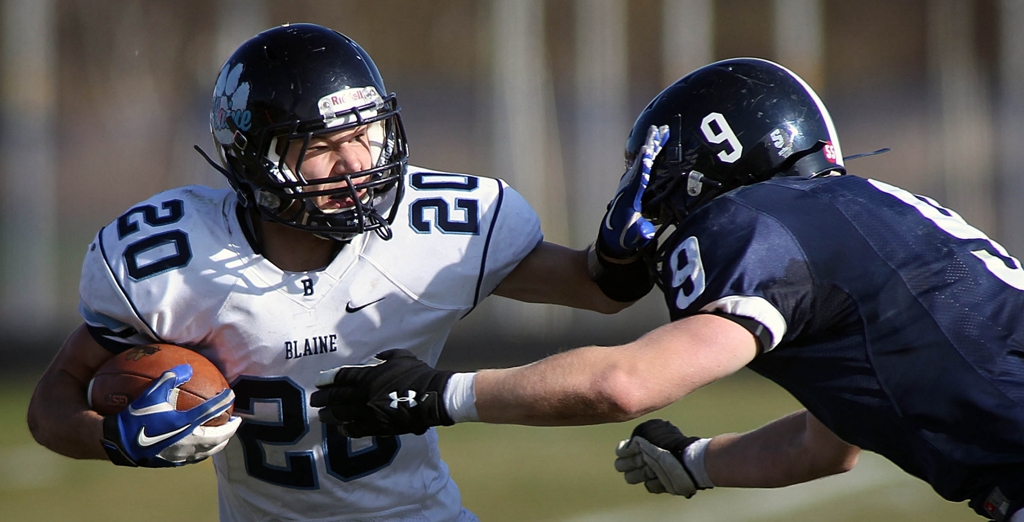 Football coaches Jeff Buerkle of Anoka and Shannon Gerrety of Blaine can agree on this much: The final score of Friday's Class 5A, Section 7 championship game will look nothing like the regular season.

Anoka trounced then-No. 5 Blaine 59-32 on Sept. 23. Both teams left 3-1 but with much different reputations. The Tornadoes became relevant, while the Bengals drew funny looks. No matter, the rival communities are now within a game of the state tournament. Finishing the job will require players on both teams to clear their minds of their regular-season meeting and refocus.

"There's no way we'll beat Blaine the way we did," said Buerkle, whose Tornadoes scored 14 points within the first two minutes of each half by playing well and pouncing on Blaine's miscues. "That just doesn't happen with Blaine."

Added Gerrety: "We did get our tails kicked. But we don't take getting beat too friendly around here. We're going to make them earn their points."

Some things remain the same since the rematch. Other things have changed. Anoka's offense, which piled up 397 of its more than 500 yards of offense against Blaine on the ground, is still potent. The running back trio of Djay Johnson, Ryan Rand and Josh Werness use contrasting style to great effect. Quarterback Cole Boughner adds an explosive element in the passing game.

"They have as powerful of an offense as our league has seen in a while," Gerrety said.

Switching to the spread offense in 2008 turned Blaine into a dual-threat quarterback factory. First James Peterson, then Eric Kline and now, The Duke. Gerrety said Duke Anyanwu, a 6-4, 220-pound force, is "100 percent now" after playing with nicks and scratches in several games, including the first Anoka game.

"It's a challenge to bring him to the ground," Buerkle said. "You've got to get a lot of people to him."

No two football programs are the same, but Mounds View and Totino-Grace are close.

They feature similar offensive formations (the wing-T), similar play selection (play-action passes) and stout, well-coached defenses. Even player similarities are common given that both schools draw from such communities as Shoreview, North Oaks and Arden Hills.

Still, a showdown with a trip to the Class 5A tournament seemed remote. Totino-Grace, a private school located in Fridley that won six of the past eight Class 4A titles, put itself in the mix last winter by opting up for one season to Class 5A to play among the schools with the largest enrollments.

Meanwhile, Mounds View needed a last-minute drive, a fortunate bounce and a touchdown at the buzzer to edge Stillwater 19-18 in the semifinals.

The coaches, Jim Galvin of Mounds View and Jeff Ferguson of Totino-Grace, said their defensive and offensive units are playing at their best despite a lack of star power.

Mounds View running back Jimmy Jaeger, who Galvin called "our best player and our difference-maker," was lost several weeks ago because of a broken hand. Filling the void have been Tyler Hansen, Jeremy Redmond and Austin Smestad.

"The whole offense is kind of the unsung hero," Galvin said. "Other than Tyler, you wouldn't know a lot of kids on our roster."

Ferguson said of his defense, "Other than Andy [Moritko], no one guy really stands out. But we don't believe our defense has any weaknesses." Ferguson praised the Eagles' 28-0 shutout of White Bear Lake in last Saturday's semifinals "the best game" the defense played.

Galvin heaped similar praise on his defense, which returned only two starters from last season.

"We're not as strong offensively as we've been the past couple years," Galvin said. "Hopefully our defense forces them to struggle as much."

Other north metro teams to watch

• Free of Totino-Grace's section dominance, Spring Lake Park can return to the state tournament for the first time since 1997. The Panthers (No. 6 in Class 4A) play host to Benilde-St. Margaret's in a rematch of the Oct. 8 game won 28-0 by Spring Lake Park.