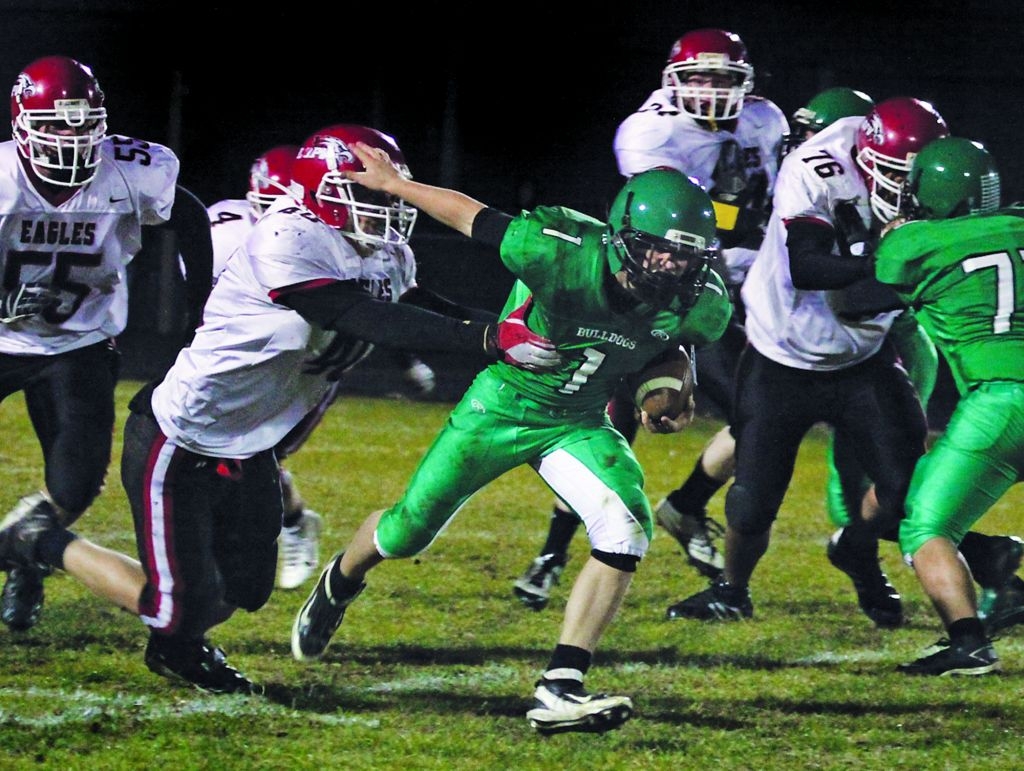 PAYNESVILLE, MINN. - Mike Jacobson is the owner and publisher of the Paynesville Press. He's also the local sportswriter, chronicling the Bulldogs that represent Paynesville High School.

This has put Jacobson on the sideline for many entertaining romps from Josh Bungum over the past two football seasons.

"The play I remember most was last year against Long Prairie," Jacobson said. "There was a defender in front of Josh and another charging from behind. Josh made one of his great cuts and was gone.

"The guy from behind smacked into his teammate. It was the biggest hit of the night ... one Long Prairie player running into another."

Bungum's exploits as a junior in 2010 could not keep Paynesville from a 3-5 regular season and a thumping from Eden Valley-Watkins in a playoff opener.

That maintained the Bulldogs' streak of not winning a playoff game in a decade. And, they had not hosted a section first-rounder in two decades.

On Tuesday night, both of those streaks ended. Paynesville was host to Lac qui Parle Valley in a Class 2A, Section 6 opener, and won 36-27.

Bungum had 32 carries for 218 yards and three touchdowns. He completed 14 of 22 passes for 162 yards and one touchdown. He returned a kickoff 80 yards to Lac qui Parle's 5. He intercepted a pass.

Not only that, the 5-foot-9, 150-pounder will be playing Chachi when Paynesville rolls out its high school musical, "Happy Days," in a couple of weeks.

Josh has an excuse. His mother Cheryl is the school's musical director. If Mom says, "You're Chachi," you're Chachi, and not even a three-sport athlete (football, basketball, baseball) can do anything about it.

Bungum admitted to a few bruises after his usual heavy workload vs. Lac qui Parle. The Bulldogs run most every play with Josh in shotgun position, and Lac qui Parle's Sam Haas was tracking his every move.

Six days earlier, Paynesville and Lac qui Parle had played in the regular-season finale -- so Bungum had a week full of meetings with Haas.

"The play that frustrated me was when he tackled me by the shoe," Bungum said. "I thought I had a long run. He dived and tripped me up. He's one of the best defensive players in this area."

Tuesday, the small, cold crowd at Paynesville was squirming when Lac qui Parle cut the lead to 28-20 in the fourth quarter. Then, Bungum made one of his spectacular cuts to put the last defender on the ground and went 49 yards for a clinching touchdown.

Among those applauding was Joe Voss, a neighbor to the Bungums since Josh and his older brother Sam were youngsters.

"Those two and the neighbor kids were out in the yard playing football every night," Voss said. "Josh was always the smallest kid, but you could see him dodging around, even then."

Bungum was a receiver and backup running back as a sophomore. In 2010, classmate Jason Kampsen -- 6-1 and 200 pounds -- opened as the quarterback, with Bungum as a running back. Kampsen was injured early in the season, and coach Max Meagher put Bungum in the shotgun formation.

Brett Bungum is a life-long Gophers football fan and has converted wife Cheryl (a Massachusetts native). The parents are so loyal that they stayed to the end of the Nebraska blowout.

Brett's dream is that the Gophers would ignore his son's size and give him a shot. A more realistic possibility for Josh to take advantage of his football skills and academic prowess could be Harvard.

"I visited there this summer, when we were there to see my mom's family," Bungum said. "Harvard has stayed in contact, but there's nothing official.

"I don't know. I might end up in D-III. If that happens, it will be Gustavus ... where my parents went to school.''

For now, Bungum has other worries: getting ready for those bad dudes from Eden Valley-Watkins, and offering a proper send-up of Chachi.

Patrick Reusse can be heard noon-4 weekdays on 1500ESPN. preusse@startribune.com