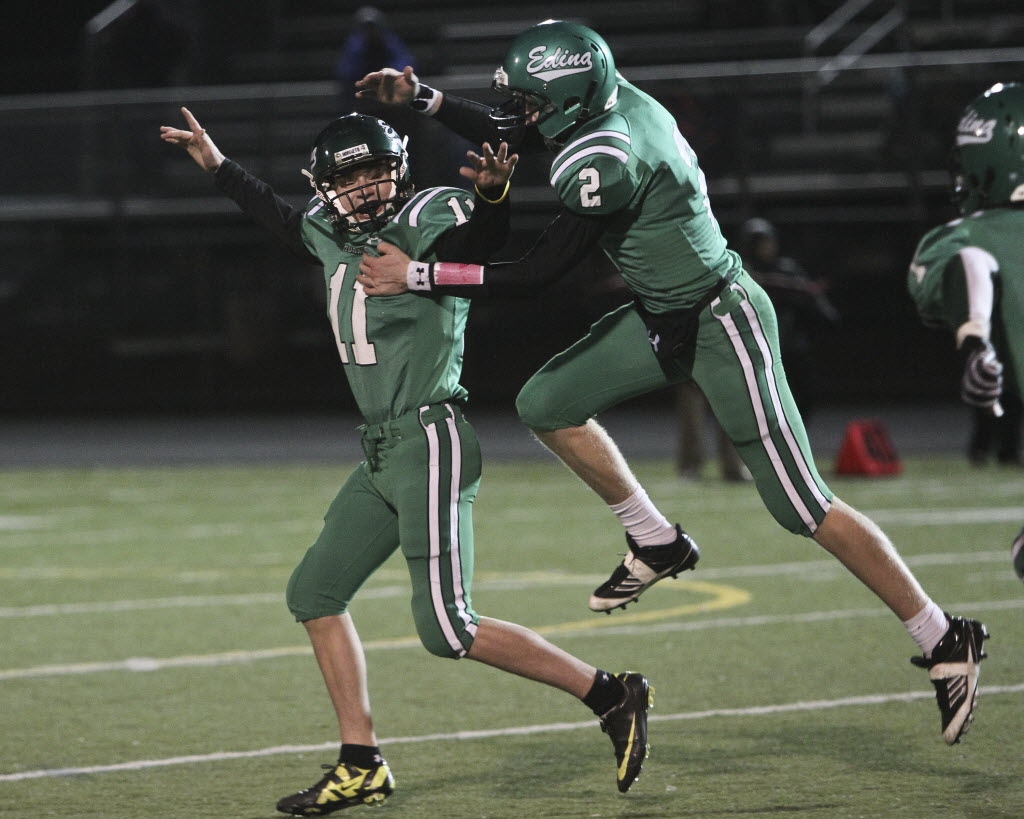 The story is more Hollywood than high school.

A freshman, not even on the roster and discovered midway through the season by the football coach as he kicked ball after ball through the uprights on an empty practice field, lines up to try the first field goal of his life.

With the game on the line and the season hanging in the balance, Edina freshman Patrick LeCorre trotted out onto Edina’s Kuhlman field with 3.9 seconds left in a 35-35 game against Hopkins in the Class 5A, Section 6 quarterfinals. In a situation that could have reduced older players to puddles of sweat, LeCorre calmly nailed the 36-yard kick, giving Edina a 38-35 victory and sending the Hornets to Saturday’s section semifinal game at Eden Prairie.

“I was debating on whether we should even send him out there,” Edina coach Reed Boltmann said. “But he has a good leg. I’ve seen him kick them from even farther.”

LeCorre, normally a soccer player, became the unlikeliest
hero in a game full of them. There was Hopkins’ marvelous wide receiver, Andre McDonald, who scored touchdowns on receptions of 80 and 32 yards. And Edina running back Chico Hardacker, who rushed for a career-high 225 yards and scored three touchdowns as the Hornets (5-4) bulled their way to a 35-18 third-quarter lead.

And don’t forget Hopkins quarterback J.T. Den Hartog, who rallied the Royals (3-6) in the fourth quarter with his arm, finishing with more than 340 yards passing — most of which came in the second half — and three touchdowns. Or Edina quarterback Mark Handberg, who showed off a nice throwing touch of his own, calmly completing three passes in the final 28.6 seconds, leading Edina from its own 42-yard line to the Hopkins 19, setting up LeCorre’s big boot.

“This was just a great high school football game,” Boltmann said. “I feel sorry for [Hopkins coach] John Den Hartog on the other side. But at the same time, it’s rewarding to come out with a win like that.”

Not surprisingly, considering he’s only 14, LeCorre was more bemused than awestruck.

“I’ve never even kicked a field goal before but, honestly, I wasn’t nervous,” he said. “I just cleared my mind and thought about what I had to do. I lined it up and just kicked it. I knew I could do it. I’ve kicked a lot longer ones before. But it was really exciting when it went through.”

LeCorre’s teammates, many of whom don’t even know who he is because he still attends Valley View Middle School, professed to be confident the kick would be made.

“We’re never out of any game,” Hardacker said. “I think we can play with anyone. I really felt he would make it. For this game, that was about the only way it could have ended.”