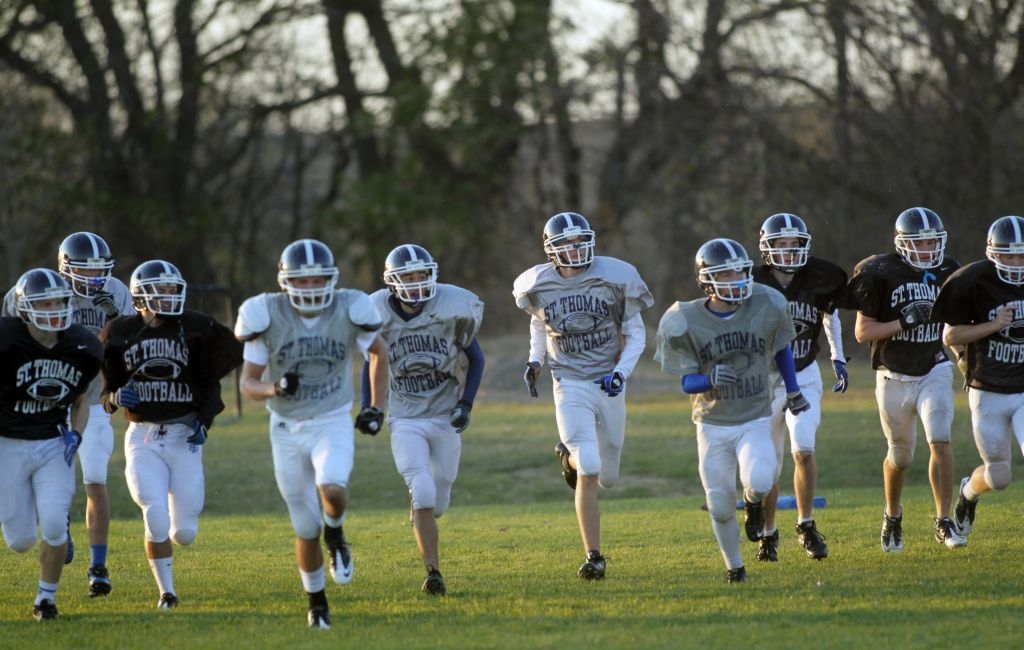 Undefeated St. Thomas Academy's depth allows it to play as many as 50 players each game.

To sum up St. Thomas Academy's roster in two words: fresh and plentiful.

Head coach Dave Ziebarth is more than willing to put all able bodies to work on game night. In fact, he prefers it. This is most evidently seen on the defensive side of the football, where 10 players are consistently rotated on and off the field every few downs.

"If you ever watch one of our games, it looks like a hockey team on defense," Ziebarth said. "New guys are always coming in."

That's been standard protocol the past three or four years, and a clear culture snapshot of the football program, which locked up its sixth conference title in 12 years with a victory over Henry Sibley on Wednesday night.

That approach keeps players fresh, gives younger kids plenty of game experience for the future, and perhaps most importantly, rewards student-athletes for their hard work during practice. Otherwise, he's afraid he might lose them.

"If you don't get a chance to play, why would you play?" Ziebarth said. "In practice, football is a lot of repetition and hard hitting and other stuff that kind of grinds on them. The reward is playing on Friday night. If you're not going to get that, it's hard to keep them out."

In doing so, the Cadets consistently have patched together a Class 4A state contender. This year's 8-0 squad has met those standards of depth and versatility.

The defense has allowed 20 first-half points all season, with 13 of those coming against Mahtomedi.

Senior safety and Dartmouth recruit Paddy Clancy leads the defense with speed, quickness and a high football IQ. He's third on the team in tackles and has made three interceptions, including one returned for a touchdown.

Middle linebacker Doug Vanasek is the only Cadet who doesn't leave the field. Billy Mork and Mack Marrin are two workhorse defensive ends.

Then there's Gophers-bound Isaac Hayes, who can play on both the offensive and defensive lines.

As the coach rotates as many as 20 players on and off the field, "the talent doesn't drop off," Hayes said.

The offense has been as varied in scoring as the defense has been stingy. Two Fridays ago, the Cadets beat conference rival Hill-Murray 42-14. All the touchdowns were scored by six different players.

Quarterback John Gould is a rushing and passing threat, and can often use both at the same time. If Gould scrambles from the pocket, he still finds receivers and baffles defenses.

"We're not going to have running backs that are rushing for 1,200 yards. They call it the three-headed monster," Ziebarth said. "We just think that makes it a lot more difficult on defenses to be able to key on any one person."

The result is an unselfish team playing for each other, and another possible crack at the state title. Each of the past two seasons, the Cadets have made it as far as the 4A state semifinals.