Pointing to the playoffs

Delano and other west metro teams enter their regular-season finales with an eye on seedings. 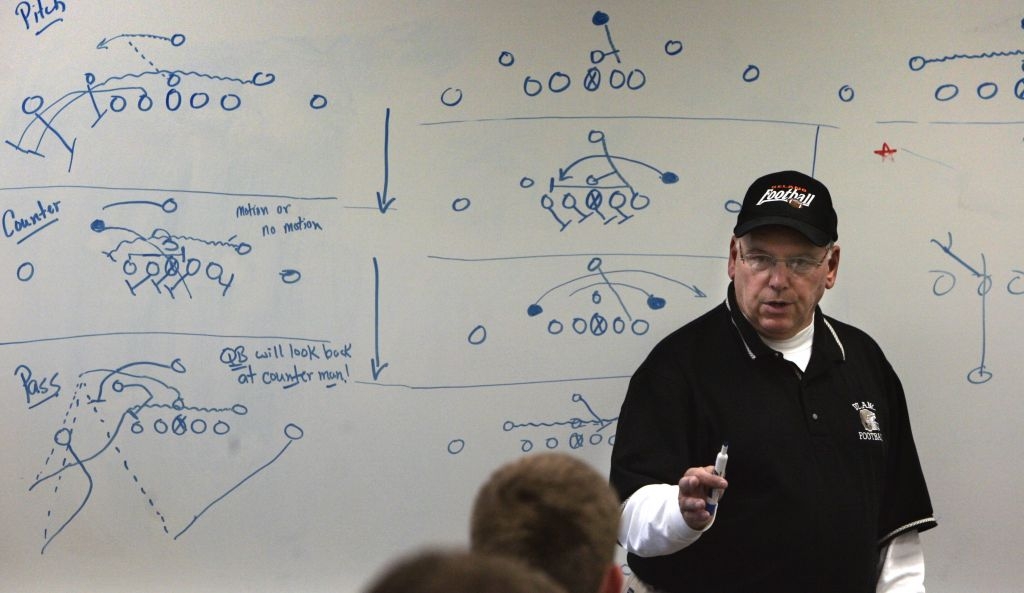 Delano head football coach Merrill Pavlovich has an undefeated team this year, just as he did when he talked strategy with his players in 2004.

In 36 years as Delano head coach, Merrill Pavlovich has seen just about everything.

Which explains his matter-of-fact approach to Wednesday's game at Glencoe-Silver Lake. The Tigers are 7-0 and ranked No. 6 in Class 3A. A victory would ensure a share of the Wright County Conference Championship with Hutchinson, which has completed conference play.

Throw in that the Tigers have lost seven games in a row to Glencoe-Silver Lake, dating to 2005, and it would perfectly understandable if Pavlovich were more than little bit stoked for this game.

But when you've got the coaching experience of Pavlovich, the big picture carries far more importance than a single game.

"Well, it's a big game for a share of the conference, probably, and another aspect is that it's important for seeding," said Pavlovich, his voice as calm as a Sunday morning. "We're in a section with Rogers and we're playing for a good seed."

Pavlovich expected his Tigers to be good this year, so he's not surprised with their undefeated record.

"We're the defending conference champs, you know," he said. "We lost some big kids to graduation but we knew we'd have some good skill players coming back. I thought we'd be pretty good."

One area that stands out, Pavlovich said, is Delano's efficiency in the passing game. Quarterback Cody Mathisen has thrown 72 passes and completed just 37, but 15 have gone for touchdowns.

"We're still a running team, and we like to play ball control, but we can surprise you," he said.

Delano will face its toughest test of the season in Glencoe-Silver Lake, but this is one area where the measured approach should pay dividends. Pavlovich has been around long enough to know that losing a few games in a row to one team has little bearing on the game at hand.

"If you look at the past, a few years ago Delano had some dominance over Glencoe," he said. "If we minimize turnovers and avoid penalites, we'll be in good shape."

• Holy Family's overtime victory over Waseca Friday most likely assured the Fire of the No. 1 seed in Class 3A, Section 2. If the Fire lose to Duluth Denfeld, it's possible Minneapolis Washburn could move into the top spot with a victory over St. Paul Central.

• Eden Prairie has wrapped up the No. 1 seed in Section 6, Class 5A, while Minnetonka can clinch the No. 2 seed by beating Hopkins. Missota Conference champion Shakopee can move into the No. 2 spot with a victory over Northfield and a Minnetonka loss.

• If DeLaSalle beats Minnehaha Academy, the Islanders will win their fifth Tri-Metro West championship in a row.