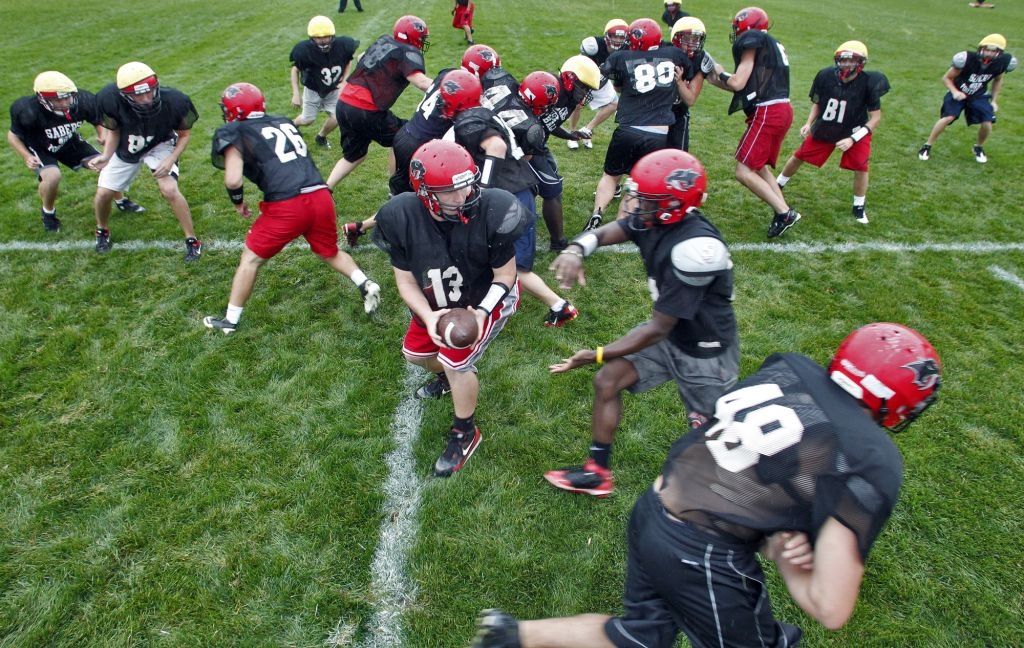 Shakopee's football team is having a successful season running out of the single-wing formation on offense. The formation bunches up running backs and ends unlike the spread offense that most teams deploy.

Forget the spread, the run-and-shoot, the pistol, whatever.

In a nod to tradition over trend, all three have teams that run the ball to excess, often out of formations demanding precision dance-like spin moves from the quarterback. It would have looked more at home 60 years ago but evokes bewilderment from today's high-risk, high-reward fan.

The coaches don't regard themselves as diehards bent on resistance. They have simply figured out that the time-honored axiom of rushing the football still works. Shakopee has won 15 consecutive regular-season games. St. Croix Lutheran is undefeated and ranked first in Class 3A. Elk River, in Hamilton's first year, is 5-1 after not winning a game last year.

"It's good football," said Stone, who in 2005 took over a Shakopee program that had little winning tradition and installed a single-wing offense originated at least a century ago. "There's nothing wrong with the spread. [The single wing is] just another way of doing things."

Last year, Corey Collins hated practice. He was an All-Mississippi 8 Conference safety for Elk River, which had lost 16 games in a row before this season.

"I dreaded it," Collins said. "With all of the losing, football just wasn't much fun."

Last summer, Elk River brought in Hamilton, who had spent three years coaching in Georgia, a hotbed of high school football. He scrapped the Elks' spread offense and installed an old-school straight-T, which utilizes double tight ends, a full-house backfield and plenty of fakery.

"I was told in Georgia that I wouldn't be able to use it," Hamilton said. "Supposedly, the kids wouldn't play it. But we put up 31 points a game."

Hamilton shuffled some players around, moving Collins to quarterback and linebacker Moses Saygbe to fullback. Elk River's fortunes took off immediately as the team piled up rushing yards while winning five of its first six games.

All with a team that averages a mere three passes a game.

"It's a whole different feeling this year," Collins said. "It took about two weeks to buy into what we are doing. Now, I keep thinking I wish we had been running this offense the entire time."

In Lemke's 17 years at St. Croix Lutheran, he has taught just one offense: the split-back, or veer, option. It reached its peak in football coolness nearly 40 years ago when used by such college powers as Oklahoma and Nebraska. This season, in particular, it's been wildly successful for the Crusaders, who are top-ranked for the first time in school history.

The reason for the run-minded veer, Lemke admitted, is that it's all he knows.

"I like option football," he said. "I don't have a clue on how to throw the ball."

Relying on precision rather than a large playbook, the option demands a commitment to details and discipline.

"We are always smaller than our opponents. We have 160-pound guards, 180-pound tackles. We have success because we get kids to buy into it."

Growing up in Virginia, Stone was intrigued by the single wing, an offense developed by legendary coach Glenn "Pop" Warner that dates back more than 100 years. Marked by tightly bunched formations on the line and in the backfield and direct snaps to a quarterback who runs through a progression of fakes, the offense screams rugby but is more a highly choreographed dance.

When Stone became Shakopee's head coach, he decided to see if the offense still had life.

"There's an element of deception to it," Stone said. "We had to teach our [quarterbacks] to completely turn in a circle. And we always have an option if teams try to take something away."

At first, Shakopee fans scratched their heads at what they were seeing. But the offense showed signs of competency, buying Stone and his staff time to develop the style.

"We stunk to begin with," he said, "but fans were just happy to see the ball moving."

By spreading the system throughout the youth program, Shakopee improved its fortunes dramatically. The Sabers went 9-1 last year and are undefeated this year, which has Stone breathing a little more comfortably.

"It was kind of a risky coaching move," Stone said. "If it doesn't work, I may be done. Who would hire me as a coach?"