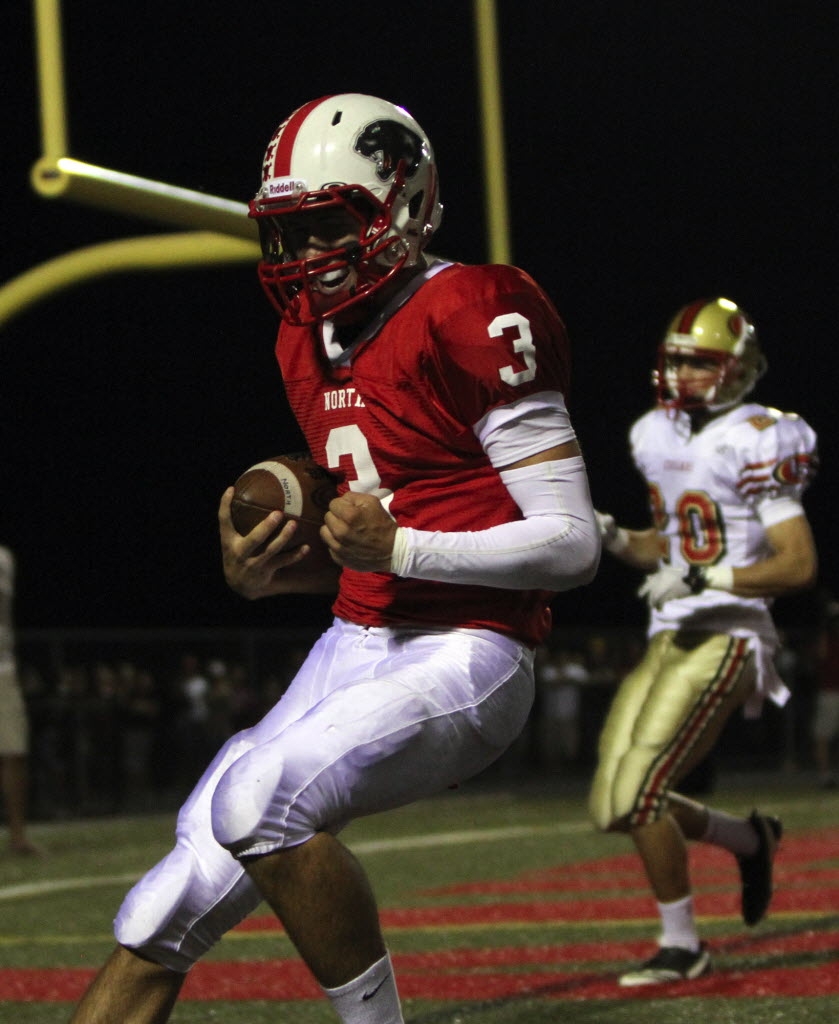 For all the talk about the quarterbacks leading up to Friday’s North vs. South game in Lakeville, a cornerback put the ribbon on a convincing 30-6 all-phases victory for North on its home turf.

Junior Grant Erickson picked off Gophers recruit Mitch Leidner and ran it back 16 yards for a touchdown with 5 minutes, 28 seconds to go in the third quarter. The exclamation point came 48 seconds after North signal-caller Trey Heid scored his second touchdown of the game on the ground in what turned into a one-sided tilt between two teams in the top half of the Star Tribune’s Metro Top 10.

That two-score swing made it a 17-point ballgame.
“I just took it,” Erickson said of his play. “The touchdown wasn’t because of me. Our defensive line and middle linebackers did all the rushing on him.”

North’s defensive romp limited Leidner to 138 yards passing — about 50 yards below his average — and picked him off twice.

“We were loose, we were confident,” Panthers coach Brian Vossen said. “They have some special talent, but we knew if we could get to them, we’d have the upper hand.

It was the first loss on North’s field for coach Larry Thompson since he took over at South when the new high school opened in 2005.

The victory was just the Panthers’ third in eight meetings since the split.

The “One Community, Two Cats” traveling trophy was a popular photo-op figure after the game.

“Giving up only one touchdown to a talented offense like that? Crazy,” North linebacker Alex Wood said. “A lot of people might not give us a lot of hype. But we’re fine with that.”

North, No. 5 in the rankings, led 10-6 over fourth-ranked South at halftime.

Heid threw an interception on the fourth play of the second half. The Panthers got the ball back four plays later on a Zach Creighton interception.

South was driving early in the fourth quarter, but Leidner was stopped on fourth-and-1 from the 21 to all but seal the deal in front of what some estimated to be over 10,000 fans.

“It’s going to be hard for us to lose games if our defense keeps pitching games like this,” said Heid, who finished 8-for-14 for 107 yards with one passing touchdown and another 97 rushing yards. “I’d be lying if I said we weren’t really, really confident ming into this game. We knew how good we were. This was a chance to make a statement to the state, and we made it loud and clear.”

The Lakeville North senior quarterback rushed 18 times for 97 yards and two touchdowns in the Panthers’ 30-6 blowout over rival Lakeville South on Friday night.

Heid made a 23-yard field goal into a stiff wind in the game. Prior to it, he was practicing boots with the wind from beyond 60 yards. He didn’t make one, but he did challenge fellow special teams members to a soda pop bet that Heid would send a kickoff through the uprights at some point during the game.

No bet, they said. Good thing.

Heid’s second kickoff of the game, after he made it 7-0 with 20 seconds left in the first quarter, was with the wind and cleared the crossbar.

“No takers,” said Heid, a three-sport athlete for North.

Coach Brian Vossen has repeatedly referred to Heid as a 12th man on the field on offense – meaning he can hurt teams with his arm and his legs.

“The couple times he’s thrown picks when he’s scrambling, it’s been about 50 yards,” Vossen said. “So it’s like a punt. Trey can move. He’s as fast as you’ll find at quarterback.”

And as a kicker?

“Well,” Vossen said. “We thought he could be a D-I kicker all along. Now he’s showing he can be a quarterback, too. Any team that gets ahold of him for next year is getting a heck of a player.”

For now, his teammates are happy he’s helped the Panthers enter the conversation as one of the top Class 5A teams in the state.