Senior running back Matthias Algarin scored his third rushing touchdown of the game to give his team the lead with 38 seconds left. 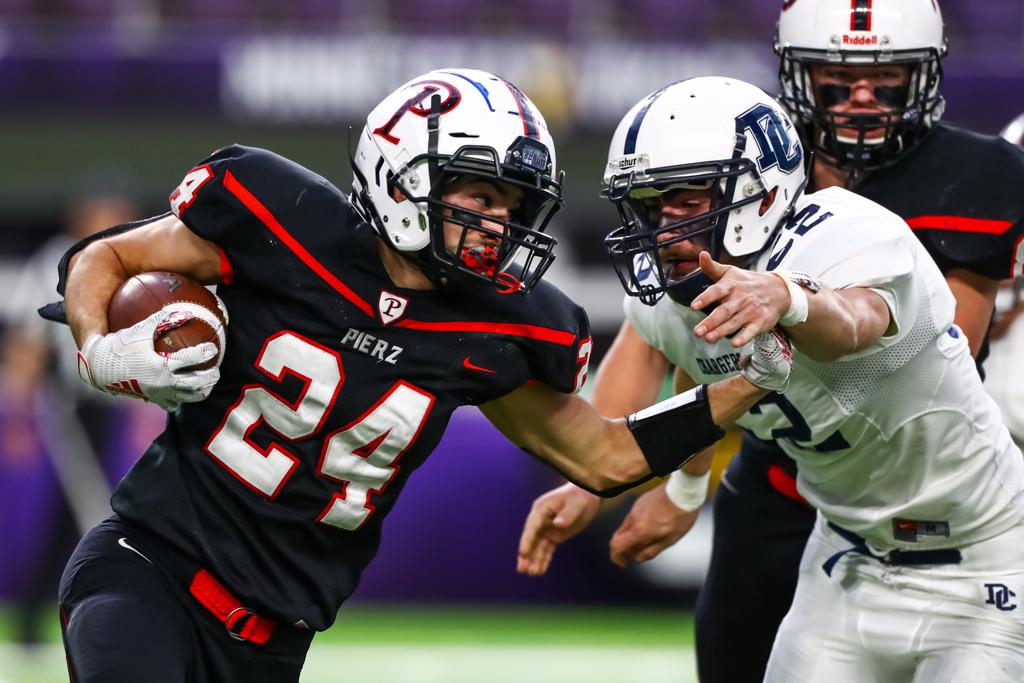 Pierz playmaker Matthias Algarin entered the postgame press conference with a paper drinking cup in his teeth, his helmet in his right hand and the Class 3A Prep Bowl championship trophy in his left.

Algarin’s hands were full throughout the top-ranked Pioneers’ 28-27 escape from unranked Dassel-Cokato on Saturday at U.S. Bank Stadium. He rushed for a game-high 165 yards and three touchdowns, caught two passes for 44 yards, made five tackles on defense and returned two kicks.

Algarin, a senior and a preferred walk-on for the Nebraska football and track and field teams, shined brightest on the Pioneers’ go-ahead scoring drive in the fourth quarter.

Facing fourth-and-1, Algarin delivered a 3-yard run. On the next play, quarterback Peter Schommer placed a ball right in Algarin’s midsection for a 22-yard advance to the Chargers’ 3-yard line. Two plays later, Algarin scored with 38 seconds left in the game.

“That’s what he does,” Pierz coach Dan Saehr said. “The kid’s a playmaker.”

The clutch catch stood out for Algarin.

“Peter put up a great ball and I just had to do what I had to do to get both my hands on it,” Algarin said. “It felt amazing to come down with it. Right away I looked over at my teammates because we worked the last six years for this moment.”

The feeling propelled him to score the go-ahead touchdown, which in turn inspired the defense to stop one final Dassel-Cokato (10-4) possession.

In the first half there was no stopping the Chargers, especially Eli Gillman. He converted all four times he was involved in fourth-down plays, and scored two touchdowns — one rushing and one receiving.

“We knew they were a really good team and we had to make the most out of every drive and for the most part we did that,” Chargers’ coach Ryan Weinandt said.

Two incomplete passes, a Pierz sack, and one more failed pass stopped the final Dassel-Cokato drive at its own 34-yard line.

“We just played with heart,” Algarin said. “The whole last quarter came down to who was going to play with heart.”

The Pierz Pioneers capped an undefeated season with a 28-27 victory against Dassel-Cokato in the Class 3A Prep Bowl played Saturday at U.S. Bank Stadium.

The Pioneers (14-0) drove 80 yards for the go-ahead touchdown in the fourth quarter. A 3-yard Matthias Algarin rushing touchdown concluded the drive with 38 seconds left.

Unranked Dassel-Cokato (10-4) didn’t quit. The Chargers tried to battle back, getting one first down before before ultimately throwing incomplete on fourth down near midfield.

Algarin, a senior, finished with three rushing touchdowns in the game as top-ranked Pierz won its fourth Prep Bowl title. The others were in 2004, 2015 and 2017.