The Rebels rebuilt their roster and self-confidence, a combination that has led to Friday night's Prep Bowl matchup with Wayzata. 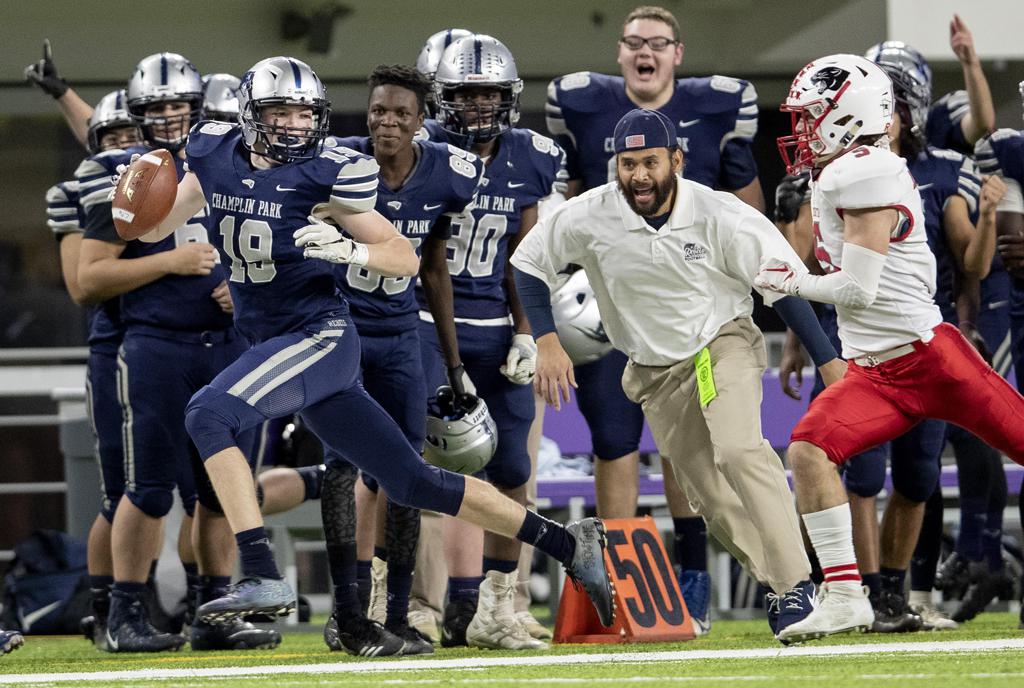 Dom Witt of Champlin Park ran after a catch in the first quarter of the Class 5A semifinals. Photo: Carlos Gonzalez, Star Tribune

When Nick Keenan took over as head coach at Champlin Park before the 2018 season, the scuttlebutt he was hearing rubbed him the wrong way.

He had been an longtime assistant for the Rebels, eventually working his way to a head coaching position at Big Lake before returning. He remembered plenty of successful Rebels teams, but the word reaching him was that it would be difficult to win there now.

“I heard it said you can’t win at Champlin Park because you don’t have the right clientele,” he recalled, shaking his head. “They said the kids were different now. I said, ‘I don’t think so.’ ”

With Champlin Park set to make the third Prep Bowl appearance (1998, 2002) in school history, facing Wayzata on Friday for the Class 6A championship, it’s evident Keenan’s take proved correct. But it didn’t just happen. Keenan had a plan.

The first order of business was to build an athletic roster.

He recruited. He sold. He cajoled. If you were an athlete at the high school or even the middle school, and you didn’t play football, chances are Keenan tried to talk you into it.

“I just liked what the coaches were building here,” Moore said. “It’s all been about getting getter and better.”

The roster fully stocked, the next task was crafting a cohesive team. For the Rebels, camaraderie came in the form of a scouting report by an early-season opponent that fell into the hands of the players.

It listed each Champlin Park player, with detailed weaknesses. The players read it; for some, the words hurt.

“Some of our kids were really down, close to tears,” Keenan said. “But the other kids on the team picked them up and said, ‘Know what? We don’t care what they say. We have your back. We’re a family here.’ As a coach, I thought that was so cool. And we came out and played really well.”

Keenan set about tweaking the lineup and putting players into positions to succeed. They lost running back Terrance Kamara, who transferred to Minneapolis North, so they moved junior Shawn Shipman into a featured role. Shipman has responded by rushing for nearly 1,000 yards despite missing time because of a leg injury.

Annikan Yang, a fireplug linebacker a year ago, was moved to the interior of the defensive line and has been a disruptive force. The defensive philosophy changed, giving that unit the tools to routinely shut down offenses.

Perhaps most important, senior Jaice Miller took over at quarterback. In his first varsity season behind center, Miller has established himself as a championship-caliber leader.

Ironically, it was the Rebels’ only loss, 21-20 to Centennial in Week 3, that set Miller’s season in motion.

“He threw three interceptions in that game, one for a touchdown,” Keenan said. “We told Jaice after that, ‘You don’t need to win all the games by yourself. Just do what we coach and what you do.’ He really took that to heart.”

Still, it wasn’t until a victory at Rosemount and a come-from-behind triumph over Totino-Grace in early October that the Rebels began to believe a special season was possible.

“The Rosemount game, we were fired up,” Miller said. “More than I’ve seen all year. That gave us a ton of confidence and going into T-G with all that confidence was huge. We’ve just been building it ever since.”

Miller said getting to the Prep Bowl seemed a long way off three months ago. He marveled at how far this team has come.

“We didn’t have that many returning starters, so you never know how it’s going to be,” he said. “It’s crazy to see we’ve gotten this far. Our confidence is higher than it’s ever been.”