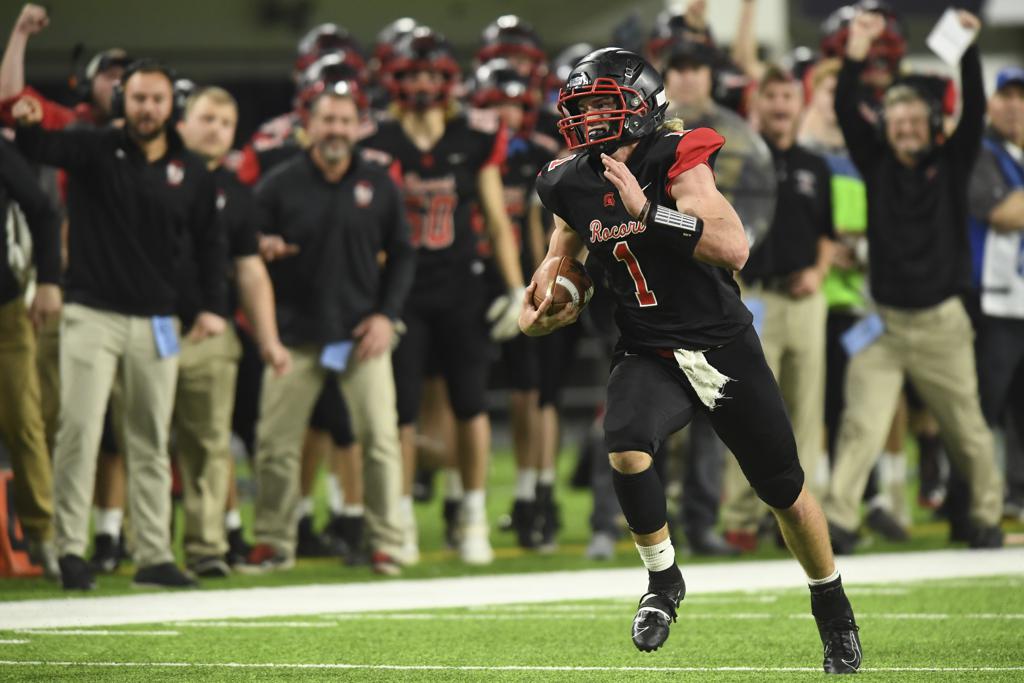 Suggs held his hands over his face, a posture with which opposing coaches can relate. One of the nation’s most coveted basketball and football players, Suggs always made a game’s defining play whether as the SMB (12-1) quarterback or safety.

He threw a 6-yard pass to Terry Lockett to put the defending Class 4A champion Wolfpack ahead 21-14 in the first overtime Prep Bowl game since 2014. And he expected more good things even as Rocori, after responding to the SMB score with a touchdown, lined up for a two-point conversion try with the bulk of its players to the left of the center.

“I thought it was going to be a quarterback run and they came out in that formation,” Suggs said afterward, hitting the table at the press conference three times with his right hand before adding, “We just went over it. I knew what was coming.”

That gave Suggs an edge in situational awareness over Rocori quarterback Jack Steil, who had hit Jayden Philippi from 15 yards out for a touchdown on fourth down to stay alive.

When the signal came from the sideline to go for two, Steil said, “I didn’t even realize that it was to win or lose the game. I was in the moment and it felt like a normal situation.”

Staying grounded helped Steil all game. A two-sport standout who is committed to play baseball at Nebraska, Steil produced 119 yards rushing and two touchdowns, a fumble recovery on defense and the passing touchdown in overtime.

Meanwhile, Suggs, who said he was “pretty much on my right leg” in the second half due to a bad left knee, turned in what his coach Chris Goodwin called a “gutty” performance: 153 yards passing and a touchdown and 70 yards rushing.

One play was left to be made. Suggs pictured the moment.

Lockett said of Suggs, who had seven interceptions this season, “We wouldn’t want anybody else but him to be one-on-one.”

While Suggs, his arms outstretched, got the tip of his right pinky finger on the ball, Andrew Anderson made the catch in the end zone. Rocori (11-2) clinched its first Prep Bowl title since 2011.

“I knew I had to go to my best wide receiver, and I trusted that he would make the play,” Steil said.

“That’s football, man,” Suggs said. “I couldn’t have played it any better.”

Rocori completed a fourth-down touchdown pass in overtime, then came right back with a successful two-point conversion pass for a 22-21 upset of defending Class 4A champion SMB in the Prep Bowl.

The teams were tied 14-14 after regulation on Friday at U.S. Bank Stadium, necessitating the first overtime Prep Bowl game since 2005 and the seventh since the format began in 1982.

In overtime, SMB received the ball first and quarterback Jalen Suggs threw to Terry Lockett for a six-yard touchdown and 21-14 lead for the Wolfpack (12-1).

Rocori quarterback Jack Steil, after misplaying a third-down snap to lose several yards, hit Jayden Philippi from 15 yards out for a score on fourth down.

It quickly became the game’s second-most dramatic play. Steil next completed a two-point conversion to Andrew Anderson just past the outstretched arms of Suggs.

Suggs, a senior who has been nationally recruited by top Division I schools for his basketball and football talents, appeared to suffer a leg injury late in the first half. He played in the second half on offense and defense but was seen limping noticeably at times.