Sophomore Eli King caught two touchdown passes from older brother Noah and returned a punt 58 yards for another score as the Warriors defense shut down the high-scoring Polars. 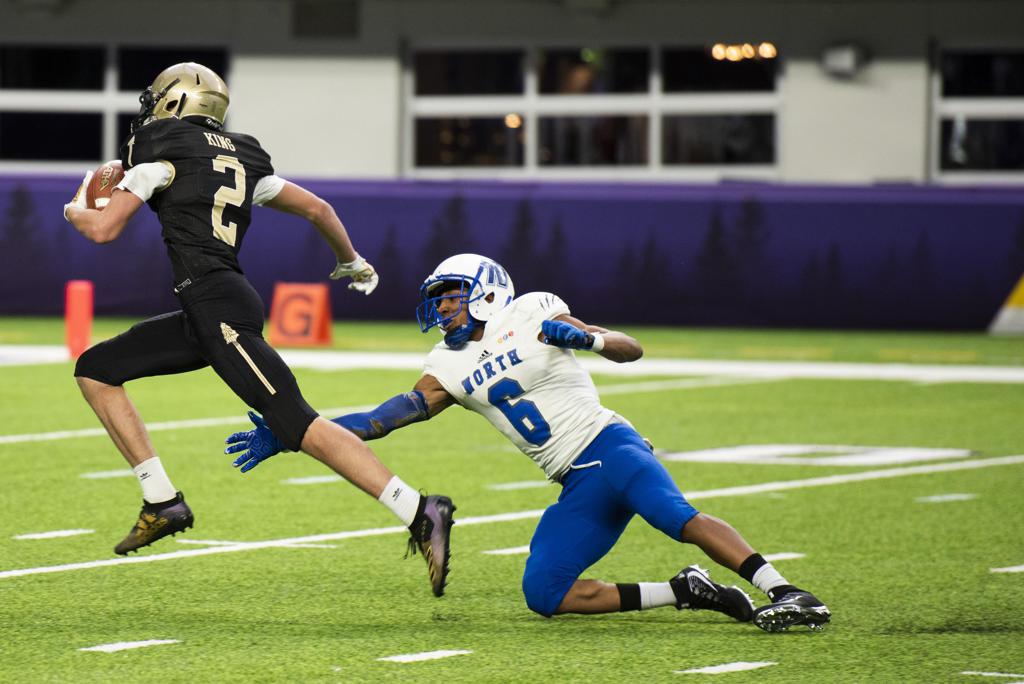 Caledonia coach Carl Fruechte had his fill of the common refrain regarding the Warriors’ Class 2A championship game opponent, Minneapolis North.
Yes, the Polars are fast. Thing is, Fruechte believed his Warriors were just as fast.

After going three-and-out on its first two drives, Caledonia took a 6-0 lead when senior quarterback Noah King hit his younger brother Eli in stride. Eli King outraced the Polars to the end zone for a 42-yard score.

The Warriors made it 13-0 early in the second quarter on the type of heads-up play that defines Caledonia football. A short punt by North (12-1) bounced in front of return man Eli King. As North players appeared to think it was going out of bounds, King slipped in, picked up the ball on the run and raced through the stunned Polars for a 58-yard touchdown.

“I saw their guys kind of stop and I was just hoping it took a good bounce,” King said. “I feel like they thought, with the short punt, I was just going to leave it.”

“That’s the first thing we do during pregame warmups,” he said. “We call scoop-and-score. don’t run laps. We practice scoop and score.”

North coach Charles Adams III tipped his cap to the Warriors for what he called "a great play. We should have been on top of it. We probably should have grabbed it ourselves.”

North had been intercepted deep in Caledonia territory on its first drive -- by Eli King. After giving up the punt return score two possessions later, the Polars stumbled again when they got the ball back. Running back Terrance Kamara fumbled and Caledonia recovered at the Polars’ 34. Noah King followed four plays later with a 15-yard scoring pass to Cole Kronebusch for a 20-0 lead.

Fruechte said the victory provided proof of the level of play Caledonia has worked hard to reach.

Caledonia took advantage of a mistake-prone Minneapolis North to win its fifth consecutive Class 2A state championship with a 26-0 victory.

The Warriors won their 68th straight game thanks to three scores from sophomore Eli King: Two touchdown receptions and a stunning 58-yard punt return that took North by surprise.

The Polars (12-1) turned the ball over three times Friday at U.S. Bank Stadium.