Star Tribune prep writers David La Vaque and Jim Paulsen weigh in with their predictions for the championship games this weekend at U.S. Bank Stadium. 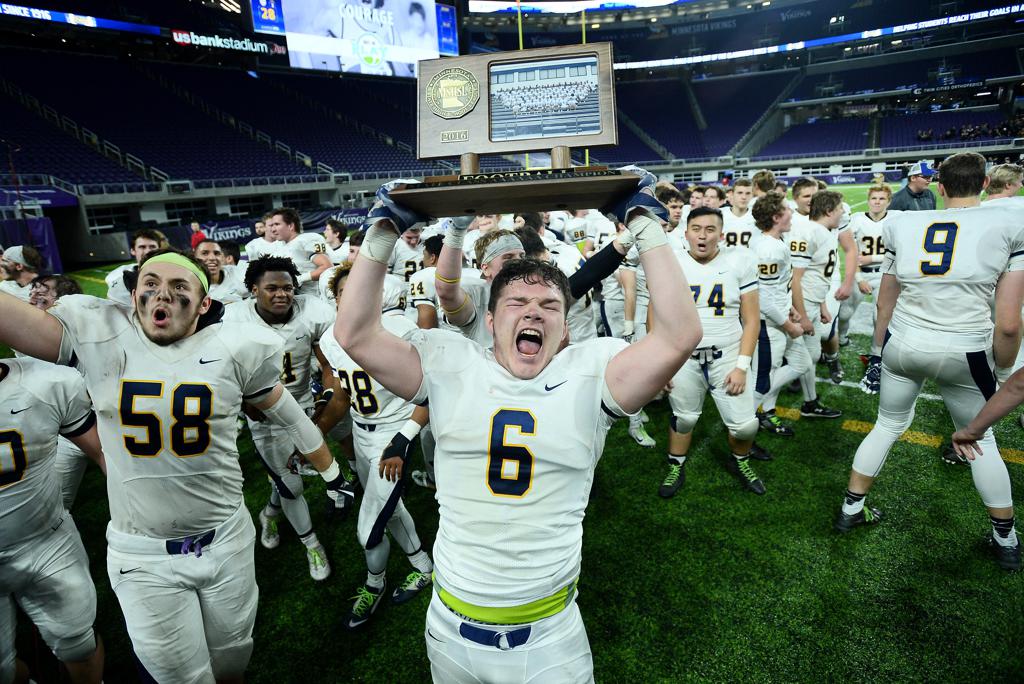 From warm summer practice days to snowy game nights, just 14 prep football teams are left standing in Minnesota, ready to converge on U.S. Bank Stadium for the Prep Bowl. Star Tribune writers David LaVaque and Jim Paulsen have a breakdown of each game, which will be aired in th Twin Cities on Ch. 45.

Click here for an enhanced look at the Class 6A Prep Bowl.

Jim says: After I watched St. Thomas Academy use the U.S. Bank Stadium turf as its own personal track in the semifinals, Chaska’s 20-0 victory over the Cadets in the final game of the regular season seems all the more impressive. The Cadets have regrouped and they’ll be extra-motivated to avenge that loss and prove their defense is every bit as good as Chaska’s.

David says: Forget that first game, when injuries had sidelined Cadets quarterback Joe Deyak and Hawks running back Matthew Kuntz. Both are back and making plays. Both teams pride themselves on getting off the ball quickly and thumping opponents. And don’t forget two great legs, St. Thomas Academy linebacker/punter Ben Reppenhagen and Chaska receiver/place-kicker Nic Snuggerud.

Rocori faces myriad challenges with SMB in 4A Prep Bowl

Jim says: Rocori looked fearless in its 48-24 victory over Winona in the semifinals. It will need that to stay with SMB, which gives opposing coaches sleepless nights with its myriad of skills. Whatever the opponent has, the uber-talented Wolfpack do them one better. SMB simply has too much.

David says: The chief SMB weapon is quarterback/safety Jalen Suggs, always the best athlete on the field. He produced 322 yards of offense — five shy of the team total — plus three touchdowns and two interceptions in the semifinal against Hutchinson. Rocori must continue to run the ball well, sustain drives and shorten the game.

No. 1 Pierz brings experience to 3A Prep Bowl with community-rallying Dassel-Cokato

Jim says: Dassel-Cokato is riding a wave of support from a community that’s rallied around the team after the death of one of its players in 2017. But emotion can only take a team so far. Pierz is comfortable in this environment, having won 37 of its past 38 games and state titles in 2015 and 2017. Dassel-Cokato will need a break or two and its best effort of the season to pull off the upset.

David says: Top-ranked Pierz showed moxie in the semifinals by shrugging off a 14-point deficit early and making a game-saving defensive play late to defeat No. 2 Jackson County Central. Senior running back Matthias Algarin and Blake Kowalczyk have combined for almost 2,000 yards rushing and 38 touchdowns. They combined to catch five passes for 98 yards from quarterback Peter Schommer against JCC.

Jim says: If there’s a Class 2A team with the athleticism and speed to challenge Caledonia and its current 67-game winning streak, it’s North. The Polars have RB Terrance Kamara and WR Rio Sanders, who are dynamite in the open field. But Caledonia’s passing attack, spearheaded by QB Noah King, is more advanced than anything North has seen this season.

David says: North’s Quientrail Jamison-Travis, a 6-3, 275-pound quarterback nightmare with 17 sacks this season, must get to Caledonia’s Noah King. Pressure him. Anything to slow the Warriors’ aerial assault. When Caledonia goes with five receivers, opposing pass rushers can’t easily be double-teamed. North coach Charles Adams III called this team his most resilient. The Polars must keep believing.

Class 1A Prep Bowl pits No. 1 BOLD, No. 2 Blooming Prairie

Jim says: The game many were hoping for, No. 1 BOLD vs. No. 2 Blooming Prairie. BOLD came within one point of a state championship a year ago and it feels like the Warriors are ready to take the final step. Quarterback Jordan Sagedahl and receiver/running back Gavin Vosika are game-changing athletes.

David says: BOLD (Bird Island-Olivia-Lake Lillian District) and Blooming Prairie are the only two Class 1A programs averaging more than 40 points scored and fewer than 10 points allowed per game. Running back Matthew Pryor and company got the Awesome Blossoms to their first Prep Bowl but BOLD proves to be too much.

Jim says: This is Mountain Lake’s year. The Wolverines have the best Nine-Man player in quarterback Abraham Stoesz, the only Minnesota Mr. Football finalist from a Nine-Man team. He’s rushed for more than 2,000 yards, passed for more than 1,000 and leads an offense that averages 49.8 points per game. And the team is hungry, having lost in the championship game in 2018.

David says: How about a little love for the Wolverine defense? It allows 10.8 points per game, stingier than all but four teams. In the semifinals, Stoesz intercepted a pass in the end zone. The play represented Mountain Lake Area’s consistently strong red zone defense. Hancock quarterback Preston Rohloff and running back Tyler Timmerman are a potent combination but the Wolverines will hold them.