Trailing at halftime, Rocori explodes with six TDs in second half to defeat Winona

Quarterback Jack Steil rushed for four of them and Brady Linn the other two in a 48-24 victory over the previously unbeaten Winhawks in the Class 4A semifinal. 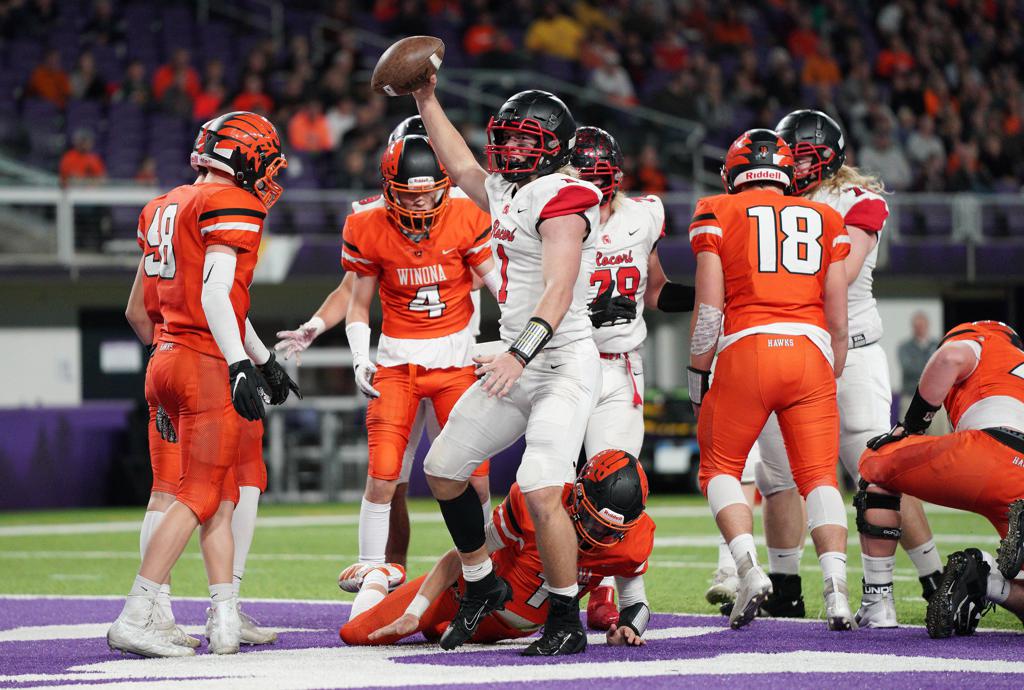 After a first-half feeling out period, Rocori found its swagger to start the second half. However it came about, the Spartans went with the feeling, overwhelming Winona by scoring 41 second-half points to pull away for a 48-24 victory.

Despite forcing the Winhawks into three first-half turnovers, Rocori trailed 14-7 at halftime Friday at U.S. Bank Stadium. The locker room message from Spartans coach James Herberg included some technical adjustments, but it was mostly about getting that winning feeling back.

“The biggest adjustment was just calming our heads down,” Herberg said. “We’re a team that has a lot of mojo and plays together. We weren’t carrying that mojo and swagger. We told them to relax and play your game.”

It didn’t take long for the Spartans (10-2) to turn Herberg’s words into actions. They took the second-half kickoff and went 74 yards in three plays, tying the game on a 23-yard score by Brady Linn.

After forcing Winona (11-1) to go three-and-out, Rocori needed just four plays to score again, with quarterback Jack Steil diving over from 1 yard out.

The second half was barely four minutes old and already Rocori had flipped the script and taken a 21-14 lead.

“I don’t think we quite drew it up like that, but that was quite an explosion coming out of the half, that’s for sure,” Herberg said.

Winona coach John Casselius agreed that the quick scores caught the Winhawks by surprise. “There was that quick change,” he said. “We thought things going and they would get a big play. [Rocori] was just a good team that had things going well.”

“We just had to go out there and play our game,” Steil said.

He added that the Spartans two regular-season losses helped weather their first-half struggles.

“Not winning all our games, we know how to face adversity and how to battle and come back,” he said.

Winona went into the game already missing its starting center, who was lost to injury in the quarterfinals. The Winhawks then lost lineman Ethan Prondzinski to a leg injury early in the first quarter, putting them down two starters on both the offensive and defensive lines.

“It hurt having some injuries,” Casselius said. “We’re down two starters on the D-line, on the O-line. Injuries are huge in high school football. The dropoff from our number ones to our number twos is significant.''

Rocori exploded for 41 points in the second half, turning a 14-7 halftime deficit into a 48-24 rout of previously undefeated Winona to advance to the Class 4A championship game.

Quarterback Jack Steil rushed for 168 yards and five touchdowns and passed for 134 yards for Rocori, which scored two touchdowns in the first 4:05 of the third quarter to take the lead for good Friday at U.S. Bank Stadium.