Nic Snuggerud scored on a 97-yard passing play to open the scoring and added a 52-yard field goal before halftime as the Hawks advanced to the Class 5A Prep Bowl. 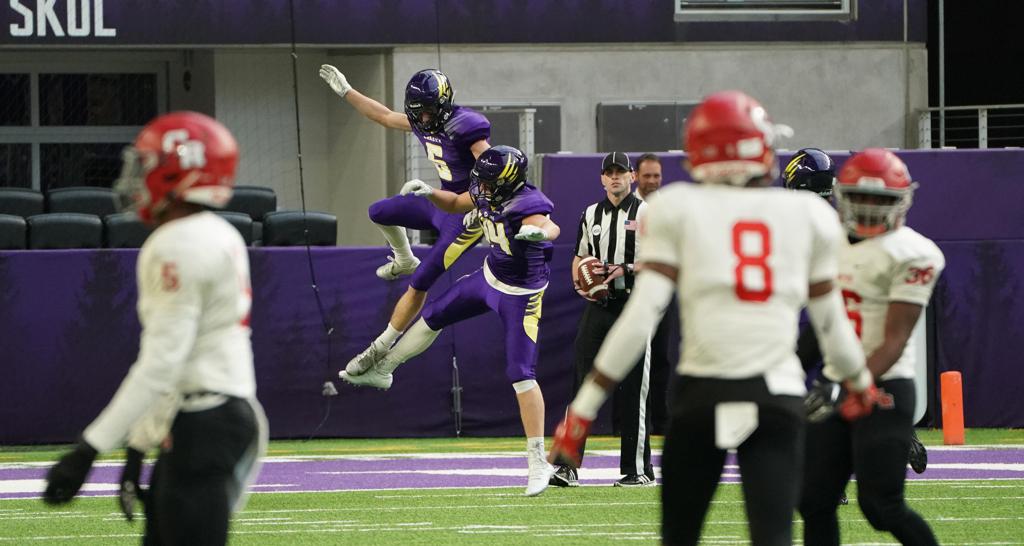 Renowned for its stifling defense, Chaska showed an offense with some sizzle in a 34-14 Class 5A football semifinal victory over Coon Rapids at U.S. Bank Stadium.

The Hawks started with a 97-yard touchdown pass with just three minutes gone and headed to halftime after they kicked a 52-yard field goal for a 17-0 lead the Cardinals could only chase.

By doing so, Chaska advanced to its first state-championship game since 1974 when it plays Saturday’s Elk River-St. Thomas Academy winner in the Prep Bowl in two weeks.

“It’s special,” Chaska coach Bryan Dahl said. “We knew we had a good group of athletes and even better kids, and we knew this could be a special year.”

They proved it special Friday by improving to 11-1 — its only loss to Armstrong in Week 4 — after junior receiver Nic Snuggerud scored on that 97-yard completion and then kicked that long field that came just 3 yards shy of a state record.

Chaska quarterback Grif Wurtz heaved the ball from his own end zone and Snuggerud plucked it, as two defenders converged, then ran away free for a sudden lead.

“All I really had to do is run,” said Snuggerud, who also caught an 84-yard touchdown pass in the Section 2 final. “Grif put it in a perfect spot, right in my arms. I was fortunate that the guy fell over and knocked the other guy down.” 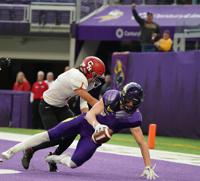 After teammate Stevo Klotz scored the first of his two running touchdowns out of the wildcat formation, Snuggerud mad it a three-possession game with his field goal just before halftime.

Playing in its first state tournament since 1983, Coon Rapids scored on an 80-yard touchdown drive right out of halftime, with David Geebli scoring on a 5-yard run. It was only the second touchdown Chaska allowed in the first three quarters the last eight weeks.

“They’re big, strong, physical and they proved it today,” Coon Rapids coach Nick Rusin said. “They came out and proved how good of a team they are.”

Snuggerud kicked a 47-yard field goal in a playoff victory over Waconia. Against Coon Rapids, he barely missed a 45-yarder to the left just before he struck from 52.

“Honestly, before today I didn’t really know I had the power for that until I got the adrenaline going,” Snuggerud said.

His father, Bo, is one of three Snuggerud-playing brothers, with his uncles Dave, a former NHL and Olympic player, and Bill. Brother Luc played hockey at Nebraska-Omaha and plays for Tampa Bay’s minor-league team.

“I really liked it so I just stuck with that,” Snuggerud said. “I don’t think they really minded.”

Renown for a stingy defense, Chaska’s showy offense punctuated its 34-14 victory over Coon Rapids on Friday in a Class 5A semifinal at U.S. Bank Stadium.

Junior receiver Nic Snuggerud was on the receiving end of a 97-yard touchdown pass that gave the Hawks a 7-0 lead little more than three minutes into the game. He also kicked a 52-yard field goal – three yards shy of a 20-year-old state record -- just before halftime that sent his team to its locker room leading 17-0.

That’s the only touchdown Chaska (11-1) has allowed in the first three quarters of its last eight games.

Snuggerud kicked his second field goal of the day, a mere 23-yarder this time, and the Hawks scored two more touchdown to stretch their lead to 34-6 before Coon Rapids scored a final touchdown late in the fourth quarter.

The Hawks advanced to the program's first Prep Bowl and first state championship game since 1974.

Coon Rapids was playing in its first state tournament since 1983.