Top-ranked Wayzata takes on No. 2 Lakeville South in the last semifinal on Friday at U.S. Bank Stadium. Our staff writers make their arguments and picks on that game and four others. 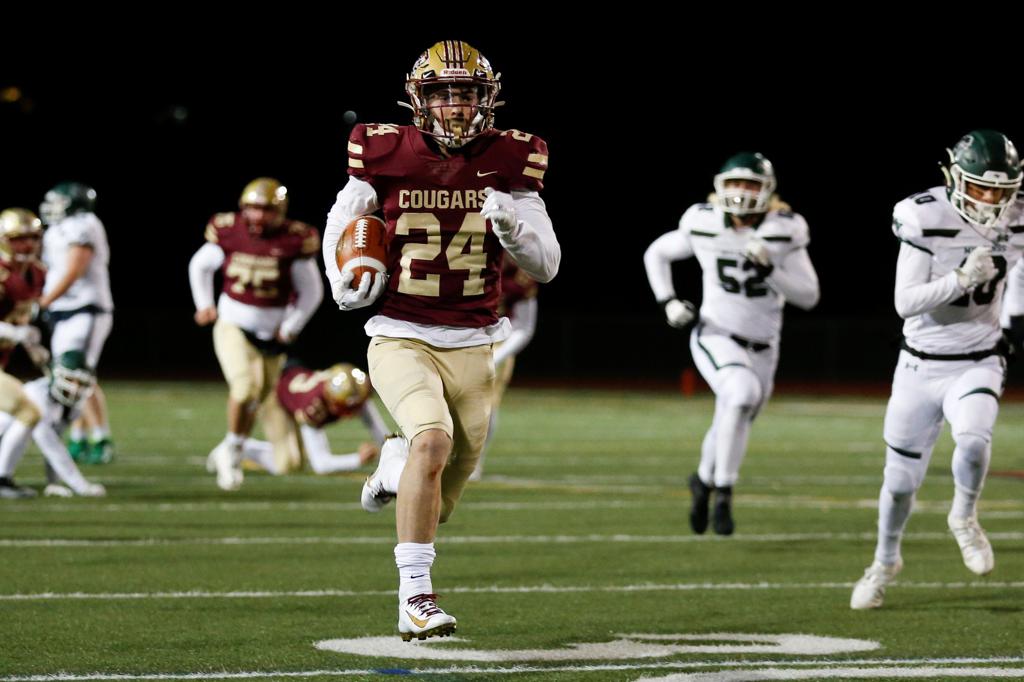 Lakeville South running back Johnny Shabaz (24) leads the No. 2-ranked Cougars in their matchup with No. 1-ranked Wayzata in a Class 6A semifinal Friday at U.S Bank Stadium. Photo by Jeff Lawler, SportsEngine

David says: Mountain Lake, the No. 1 team in the final Associated Press poll, is led by quarterback Abraham Stoesz. He led the Wolverines’ explosive attack with five touchdowns (four running, one passing) in the quarterfinals. Mountain Lake 42, Win-E-Mac 28

Jim says: Mountain Lake, which got close last year only to fall in the championship game to Spring Grove, is more than ready to take the next step. The Wolverines haven’t had a game this season decided by fewer than 20 points. Mountain Lake 48, Win-E-Mac 16

David says: Caledonia has the nation’s longest current winning streak (66 games) and enters the game with the mental edge after blanking Barnesville 21-0 in last year’s Prep Bowl. The Warriors remain too fast and physical. Caledonia 35, Barnesville 14

Jim says: I would love to be the one to call the upset and pick Barnesville. Caledonia has got to lose sometime. But without a strong reason to do so, picking against the Warriors is folly. Caledonia 28, Barnesville 12

Jim says: Last week I underestimated Coon Rapids, which has played some serious postseason defense. But Chaska’s defense is at another level. The Hawks have given up just one touchdown in the first three quarters of its last seven games. Chaska 20, Coon Rapids 7

David says: A repeat of the four turnovers Winona committed in the quarterfinals simply won’t do. Quarterback Jackson Nibbelink and the Winhawks offense owe the defense one. Winona 38, Rocori 20

Jim says: Coach John Cassellius has made Winona a perennial power, 43-4 over its last four seasons. But Rocori’s stiff schedule will have the Spartans well-prepared. Its knockaround defense is as good as Winona has faced. Rocori 23, Winona 21

David says: Does it get much better than No. 1 Wayzata and No. 2 Lakeville South? Wayzata’s defense, a cadre of playmakers who don’t just stop offenses, they push them back, against a disciplined, talented South offense that chip, chip, chips away before exploding for big yards. Wayzata 41, Lakeville South 38

Jim says: How do you handicap this one? I can’t find one decided advantage for one team over the other. Wayzata has played a few tight ones, but Lakeville South has one loss. Going simply by feel, this seems like Wayzata’s year. Wayzata 31, Lakeville South 21