Abraham Stoesz threw for two touchdowns, ran for two more and had a key interception in a 45-6 rout of Win-E-Mac. 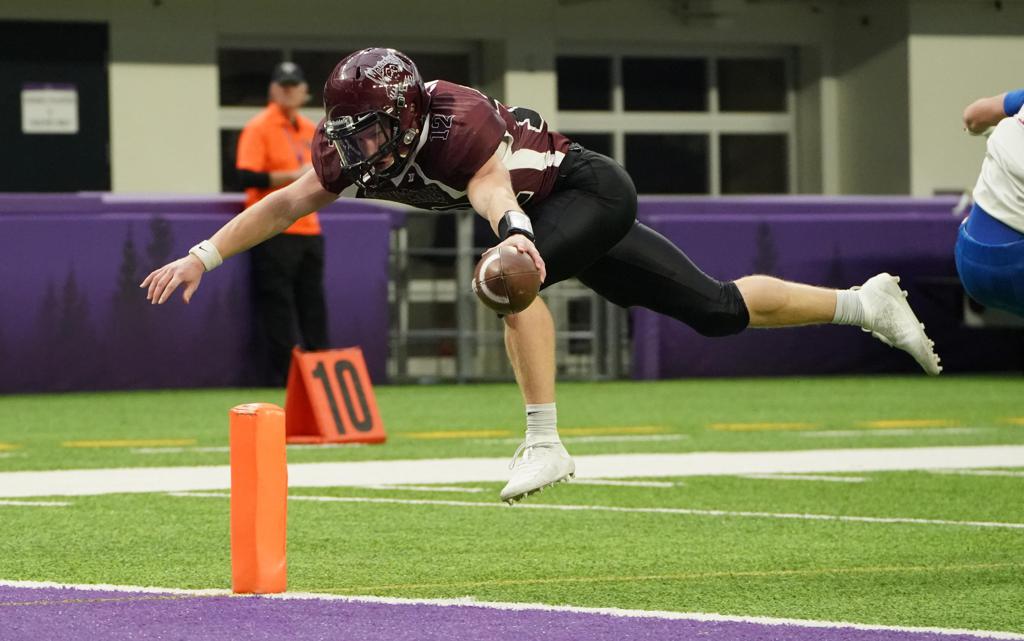 Despite reaching for the end zone, Mountain Lake quarterback Abraham Stoesz (12) was called down short of a touchdown in the first half. Photo: Shari L. Gross • shari.gross@startribune.com

Mountain Lake Area is averaging 49.7 points per game this season. Its defense deserves some of the credit.

“Our defense has been phenomenal all year,” Wolverines coach Tim Kirk said. “It has put us in a good position.”

The Wolverines displayed a potent offense and reliable defense Friday at U.S. Bank Stadium. With Abraham Stoesz directing a mistake-free and balanced offense, the Wolverines rolled to a 45-6 victory over Win-E-Mac in a Nine-Man semifinal.

The victory puts Mountain Lake (13-0) in the Prep Bowl for the second consecutive season.

He also contributed a timely play on defense. With the Wolverines leading 12-0 early in the second quarter, he intercepted a pass in the end zone to end a Patriots scoring threat.

“We were in zone coverage,” Stoesz said, “and I was able to make the read.”

After the interception, Stoesz ran for a touchdown and threw a touchdown pass as the Wolverines built a 24-0 halftime lead.

Win-E-Mac coach Aaron Cook said his team was “able to move the ball early, but their defense really tightened up in the red zone.”

The Patriots (12-1) were making their first appearance in the semifinals.

Abraham Stoesz did a little of everything for Mountain Lake Area on Friday.

Stoesz efficiently directed the Wolverines’ potent offense and came up with a timely interception on defense as the Wolverines rolled to a 45-6 victory over Win-E-Mac in a Nine-man semifinal at U.S. Bank Stadium.

Mace Harrig rushed for three touchdowns for the Wolverines.

The Wolverines (13-0) advanced to the Prep Bowl for the second consecutive season. The Wolverines will face Hancock, which defeated Mountain Iron-Buhl in the semifinals, on Nov. 30. The Wolverines lost to Spring Grove in last year’s Nine-Man championship game.

The loss was the first of the season for the Patriots (12-1), appearing in their first semifinal. Win-E-Mac includes the northwest Minnesota communities of Winger, Erskine and McIntosh.