Wayzata offense asserts itself in thumping of Centennial

The unbeaten Trojans defeated the Cougars 38-21 to advance to the Class 6A semifinals at U.S. Bank Stadium. 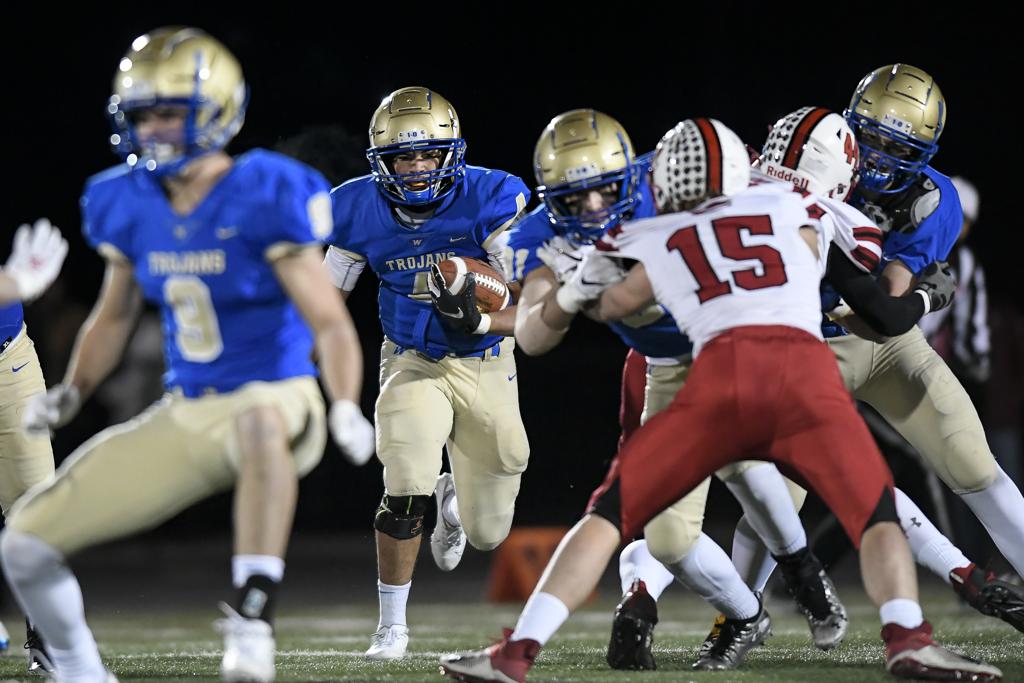 Wayzata running back Christian Vasser (4) ran the ball in the first half against Centennial. Photo: Aaron Lavinsky • aaron.lavinsky@startribune.com

The Wayzata sophomore defensive back was given added responsibility to play the run Friday in the Class 6A quarterfinal vs. Centennial. So when teammate Loshiaka Roques hit Centennial quarterback Connor Zulk near midfield late in the second quarter, the ball squirted free and came to rest at Berkland’s feet.

“I just saw a lot of green grass in front of me,” Berkland said. “Loshiaka made a great play and I just wanted to do my part to finish the play off.”

Berkland turned the fumble into a 56-yard scoop-and-score momentum-builder only 77 seconds before halftime.

It gave the Trojans a 10-point halftime lead, which they turned into a 38-21 victory, bumping their record to 11-0.

All season, Wayzata (11-0) has based its success on a dogged defense and a strong rushing attack. Friday in Chanhassen, it was the Trojans offense that shone, helping out a defense that gave up more points than it had in any game this season.

For much of the first half, the two teams traded scores. Wayzata took a 7-0 lead on a touchdown pass from Tom Schmidt to Luke Bodine. Then Centennial’s Noah Larson took an option pitch and scooted around left end for a 44-yard score, tying the game at 7-7.

After a Wayzata field goal, Centennial (8-3) took its only lead when Zulk tossed a 4-yard scoring pass to Tim O’Neill for a 14-10 lead.

Again, the Trojans answered. Schmidt threw his second touchdown pass, this one to Daeshawn Bush, and Wayzata was back on top 17-14.

Shortly thereafter, Roques and Berkland combined on the game’s most pivotal play.

“We want to find ways to win team games,” Wayzata coach Lambert Brown said. “Whether it’s a great ‘D’ night, a great ‘O’ night, a great special teams night, whatever we need to do to find a way to win.”

Centennial responded early in the third quarter when Larson scored from 20 yards out, cutting its deficit to 24-21.

The Trojans defense stiffened after that. And running back Christian Vasser started finding big holes, scoring on runs of 47 and 2 yards.

“We know that if the defense is messing up, the offense will go out and score for us,” Roques said. “We don’t want to lose to anybody. Our will to win is so high.”

Wayzata has spent an entire season building its resume based on a hard-charging running attack, a smattering of passes and an unwilting defense.

It’s about time the offense had to carry the load.

The Trojans allowed their most points all season Friday but their offense was up to the task in a 38-21 victory over Centennial.

Centennial’s points all were scored with the outcome still in doubt, but the Trojans’s offense was so efficient, it didn’t matter.

Centennial played the No. 1-ranked Trojans nearly straight up in the first half, but two untimely fumbles helped the Trojans to a 24-14 halftime lead.

Wayzata scored first after a 13-play, 62-yard drive on its first possession. Quarterback Tom Schmidt hit Luke Bodine with a 6-yard pass for a 7-0 lead.

Centennial answered on its next possession when speedy halfback Noah Larson took an option pitch around left end 44 yard to the end zone, tying the game 7-7.

The Cougars then perfectly executed an onside kick. But two plays later, Zulk fumbled the snap and the Trojans recovered.

Wayzata promptly moved into position for a 28-yard field goal by Peter Melquist and a 10-7 lead.

Centennial marched quickly downfield and took a 14-10 lead on a 4-yard pass from Zulk to Tim O’Neill.

The game turned decidedly in Wayzata’s favor after that.

The Trojans regained the lead on a 10-yard pass from Schmidt to Daeshawn Bush. Just over two minutes later, Wayzata’s Loshaika Roques hit Zulk in the back field and forced a fumble. Trojans defensive back Drew Berkland picked up the ball and took it 56 yards for a touchdown and a 24-14 lead at halftime.

The two teams traded touchdowns in the third quarter. Larson scored his second touchdown of the game on a 20-yard run off tackle on fourth-and-2.

Wayzata running back Christian Vasser then put his mark on the game with a 47-yard scoring dash that bumped the lead to 31-21.

The Wayzata defense started to assert itself after that. It stopped Centennial on fourth-and-2 in Wayzata territory and forced Centennial into a punt.

Vasser added a second touchdown on a 2-yard dive for the final score.

Check back later for an updated story on the game.