The Mustangs' defense held the Aidan Bouman-led Bison offense mostly in check while their own quarterback, Cole Stenstrom, ran for a score and threw two scoring passes to Jack Roeber. 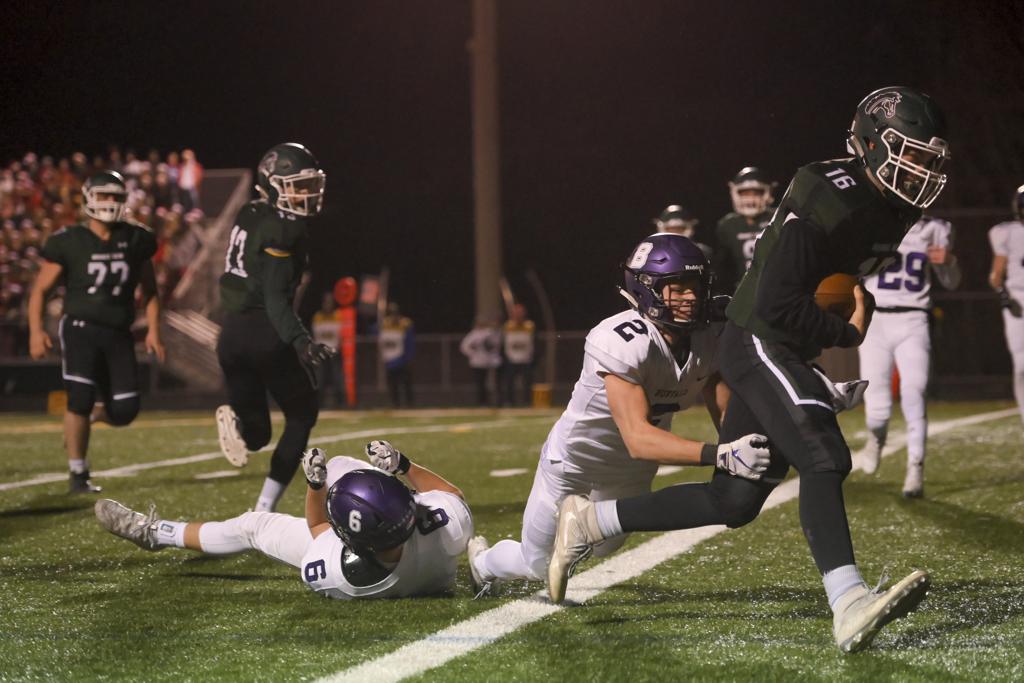 You don’t work football. You play it.

Mounds View football coach Aaron Moberg’s reminder at practice this week probably sounded foreign to a group of players who have done nothing but work since the 2018 season ended one game short of the state tournament.

“With playoffs, sometimes the stress and the tension can keep you from enjoying the moment,” Moberg said. “We wanted our kids to enjoy being out there together and playing the game.”

The smiles kept coming throughout a 48-13 dismantling of Friday’s visitors from Buffalo. The victory clinched the Mustangs’ first state tournament appearance in five years. Mounds View (8-2), ranked No. 8 in the Associated Press poll, advances to play in the quarterfinals Friday against No. 2 Lakeville South at Eden Prairie High School.

When the Bison (5-5) did score, Mounds View responded with touchdowns drives of its own each time.

“That’s probably what I was most proud of tonight,” Moberg said. “When they did make a play, we took the momentum right back.”

“They dropped a lot of guys back into coverage,” Tweten said. “It was either run the ball or pass into a pretty loaded secondary.”

Moberg said, “Our defense is the staple of Mustang football. Our defense played probably the best they have all year because Buffalo has a really good offense and they did an awesome job against them.”

The Mounds View offense was no slouch. Two conversions on fourth down propelled a scoring drive capped by Brian Tebbutt’s 5-yard touchdown run for a 21-7 lead.

The second Stenstrom-to-Roeber connection was a designed 36-yard heave to the end zone for a touchdown with no time left in the first half.

Trailing 27-7, Buffalo started the second half by recovering a Mounds View fumble. Facing fourth-and-8, Bouman hit Tweten for a 38-yard touchdown and the deficit was trimmed to 27-13.

But the Mustangs answered. Brian Tebbutt got free for a 21-yard touchdown, his second score of the game, for a 34-13 lead.

“We struggled with that at the beginning of the season so we emphasized coming back,” Stenstrom said.

Mounds View clinched its first state tournament appearance in five years with a 48-13 dismantling of Friday’s visitors from Buffalo.

The Mustangs (8-2), ranked No. 8 in the Associated Press poll, advance to play in the quarterfinals Friday against No. 2 Lakeville South at Eden Prairie High School.

Mounds View dominated the first half on both sides of the ball at led 27-7 at halftime. The tremendous Buffalo (5-5) duo of quarterback Aidan Bouman and receiver Michael Tweten hooked up for a touchdown. Otherwise, the Mustangs’ gang green defense dictated the action.

Buffalo’s six possessions read like this: One touchdown, one punt, turned over on downs twice and two Mateo Cisneros interceptions. With Bouman limited, the Bisons’ most consistent success came on inside runs from Isaiah Karles set up with soild trap blocking.

Quarterback Cole Stenstrom ran for a score and threw for two to Jack Roeber – the second on a 36-yard heave with no time left in the first half.

Buffalo started the second half almost as well. The Bison recovered a fumble on Mounds View’s first play. Facing fourth-and-8, Bouman hit Tweten for a 38-yard touchdown. Buffalo trimmed its deficit to 27-13.

As they did in the first half, the Mustangs answered a Bison touchdown with one of their own. Brian Tebbutt got free for a 21-touchdown, his second end zone trip of the evening, for a 34-13 Mounds View lead.