The Elks, who never punted, used their straight-T offense to produce four long scoring drives en route to a 32-29 victory and their fourth consecutive trip to the Class 5A state tournament quarterfinals. 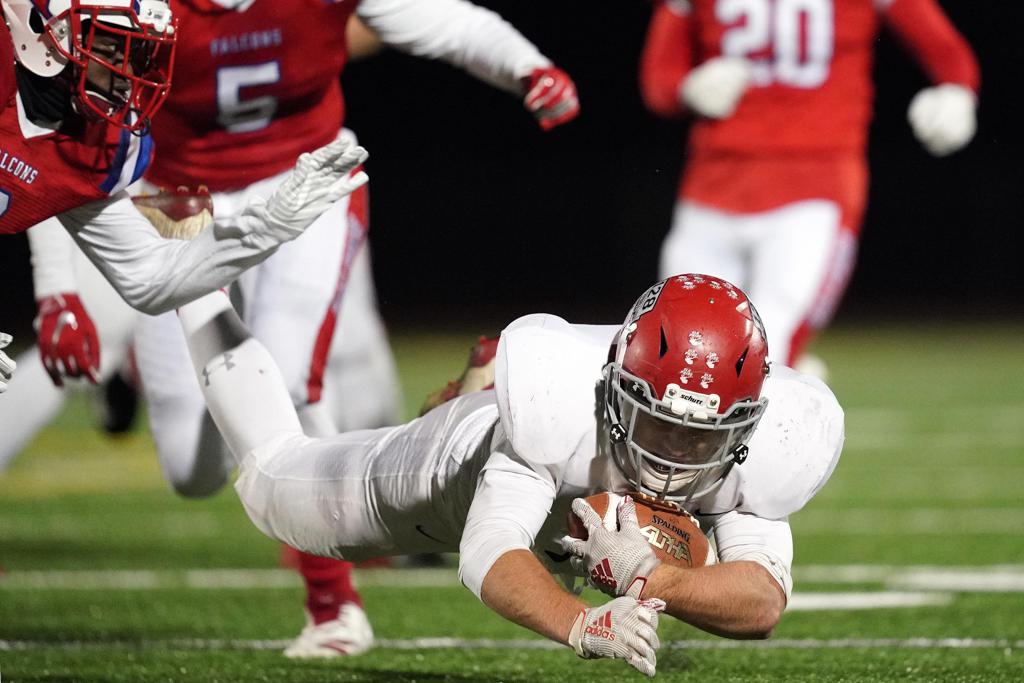 Elk River running back Joe Nordstrom (3), who scored two rushing touchdowns for the Elks, got tripped up as he ran with the ball in the second half. Photo: ANTHONY SOUFFLE • anthony.souffle@startribune.com

The snow that began falling in the fourth quarter was collecting on the field at St. Michael-Albertville High School after Elk River’s 32-29 victory over Armstrong Friday.

Snow angels were being made. A random snowball or two was thrown. The Elk River players and coach, parents and faithful gathered the west end of the field, reveling in winning another Class 5A, Section 6 title, their fourth in as many seasons.

This was not a moment anyone wanted to end soon.

The Elks did it with by running their straight-T offense to near perfection — they had three drives of 11 plays or more — showing off a defense that seems to get better by the week.

The two teams traded touchdowns through the better part of the first half, each scoring on their first three possessions of the game.

Armstrong had scoring runs of 5 and 50 yards by Caleb Jones sandwiched around a 13-yard reception by Thai Bowman. Elk River scored on a 41-yard run by Rahim Avery, and 10- and 3-yard bursts by Joe Nordstrom.

But for all of the offense, the game’s most crucial moment came courtesy of Elk River’s defense. Late in the second quarter, with Armstrong threatening, the Elks’ Carter Otto pressured Armstrong quarterback Jake Breitbach into a throw that was intercepted by Elks cornerback Nick Gill. The play preserved a 24-23 lead they took into halftime.

“That was a huge play Carter Otto,” Hamilton said. “He’s our fastest player. If we don’t have him at that spot, we don’t make that play.”

Said Otto, “I just did my job. Everyone did their job, we executed and we got a pick out of it.”

Elk River came out in the second half and expanded its lead to 32-23 on a 2-yard run by Otto, capping a 12-play, 58-yard drive that took 6:20 to complete. It also seemed to take something out of the Armstrong defense.

“We just don’t see that offense,” Armstrong coach Jack Negen said. “You can try to run it in practice, but it’s not the same.”

Armstrong had one last gasp, going 99 yards and cutting the margin to 32-29 on Jones’ third score of the game with 1:40 left. But the Falcons never got the ball again.

“This is huge,” running back Joe Nordstrom said. “Everyone talks about our offense, but we’ll go where our defense takes us. If we play a complete game, we can play with anybody.”

Elk River’s relentless straight-T offense doesn’t look complicated, but it is effective. And it claimed another victim Friday, methodically grinding Armstrong’s defense in a 32-29 victory in the Class 5A, Section 6 championship game Friday at St. Michael-Albertville.

The Elks never punted and put together four long scoring drives to defeat the previously unbeaten Falcons. Joe Nordstrom scored two touchdowns for the Elks, who advance to the Class 5A state tournament for the fourth consecutive season.