Alex Findley kicked the game-winning 23-yard field goal with under a minute, before the Cardinals defense held off the Huskies. 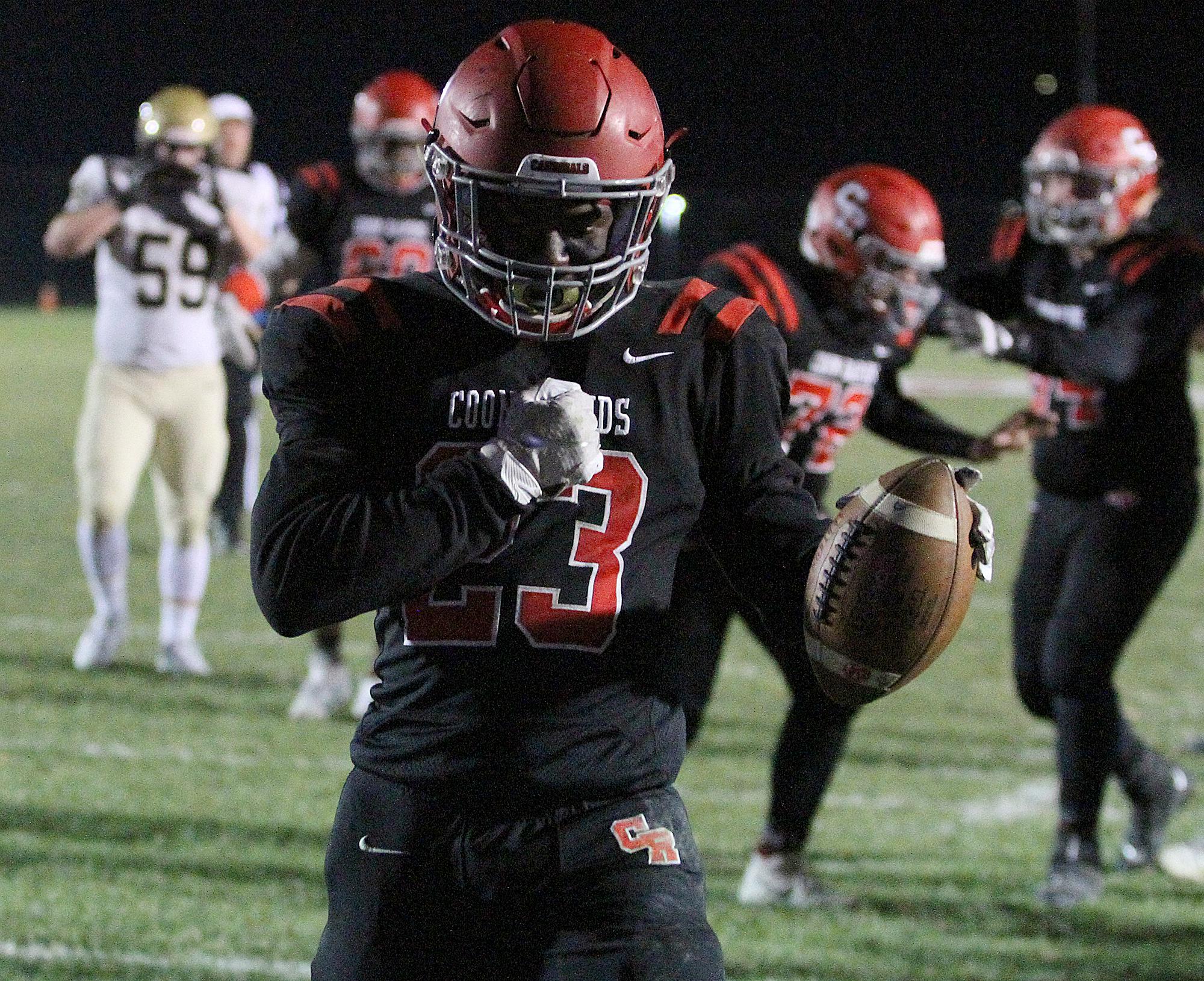 To everyone outside Coon Rapids, this was unexpected.

It's hard to believe a first-year head coach can come into a program and get it to the state tournament. It's even harder to believe for a program that last reached the state football tournament in 1983 when it won its lone title. A program that lost 22 straight earlier this decade and petitioned to drop down from Class 6A to Class 5A to be more competitive and has had three head coaches in the last four years.

Yet here they are.

While the Huskies went to state three straight years from 2015-17 and played in the section final last year, Coon Rapids last played in a section final in 2008. As the fans and players were heard saying after the game, no one even expected the Cardinals to reach this game in the first place.

Look at them now. 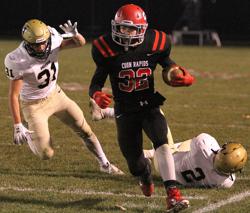 “When I came here as a freshman, we were 0-9,” senior defensive lineman Myles Taylor said. “To come here and do this, first time in 36 years — last one won it [all]. We’ve got a lot to live up to, but I feel like we’re up to the task.”

Senior kicker Alex Findley kicked the game-winning field goal after Jordan Doe made a stupendous diving catch at the 1-yard line late in the game. Despite a first-and-goal, three Coon Rapids' runs were unsuccessful, so Findley, who was 4 of 5 on attempts this season, came in for a 23-yard try.

Findley nailed a line-drive kick for a 17-14 lead, and the defense held up.

“There’s some things where you go into game situations, you’re very nervous, you’re very tense,” Findley said. “I felt very composed, I felt like I had it under control this time.”

Nick Rusin, who left the coaching staff at Blaine to lead Coon Rapids this year, wasn’t even born yet the last time the Cardinals went to state.

“It obviously means a lot,” he said. “Being my first year at Coon Rapids, these boys have gone through a lot. There’s been a lot of turnover in the program. I’m just so happy for these players.”

The Cardinals showed their toughness and a penchant for making the clutch play against the Huskies. They had three sacks on third-down plays, a blocked field goal, an interception to set up a touchdown drive, and led 14-0 in the third quarter. And even after Andover tied it on a fourth-down touchdown pass, the Cardinals had a response.

“We’re a really tough team,” senior running back David Geebli said. “I think we can keep going all the way to the state championship.”

Geebli, who cramped up and missed half a drive, finished with 170 rushing yards and a TD. His 9-yard scoring run after coming back into the game helped give Coon Rapids a 14-0 lead.

Toughness. Not everyone stayed and gutted out the lean years at Coon Rapids. Those who did have just rewarded themselves.

“We just felt like this class, this class, if we were gonna do it, we had to do it now,” Taylor said. “The coaches who stayed, we trusted them; the coaches who came, we bought into what they wanted to do, just because we knew that was going to make us a better team in the long run.”

There’s a pile of chips from the Cardinals’ collective shoulders gathered over the last few decades. Derided for moving down a class, the Cardinals didn’t see any better success in Class 5A. Even 3-0 and 4-1 starts the last two seasons ended the same way every season since 2011 did: with a first-round playoff exit. This year, the Cardinals won 40-0 over St. Francis before downing Andover.

“We deserve it,”  Taylor said. “A lot of people feel like they knew to look down upon us. Before the season, they always look past us. It’s just Coon Rapids.” 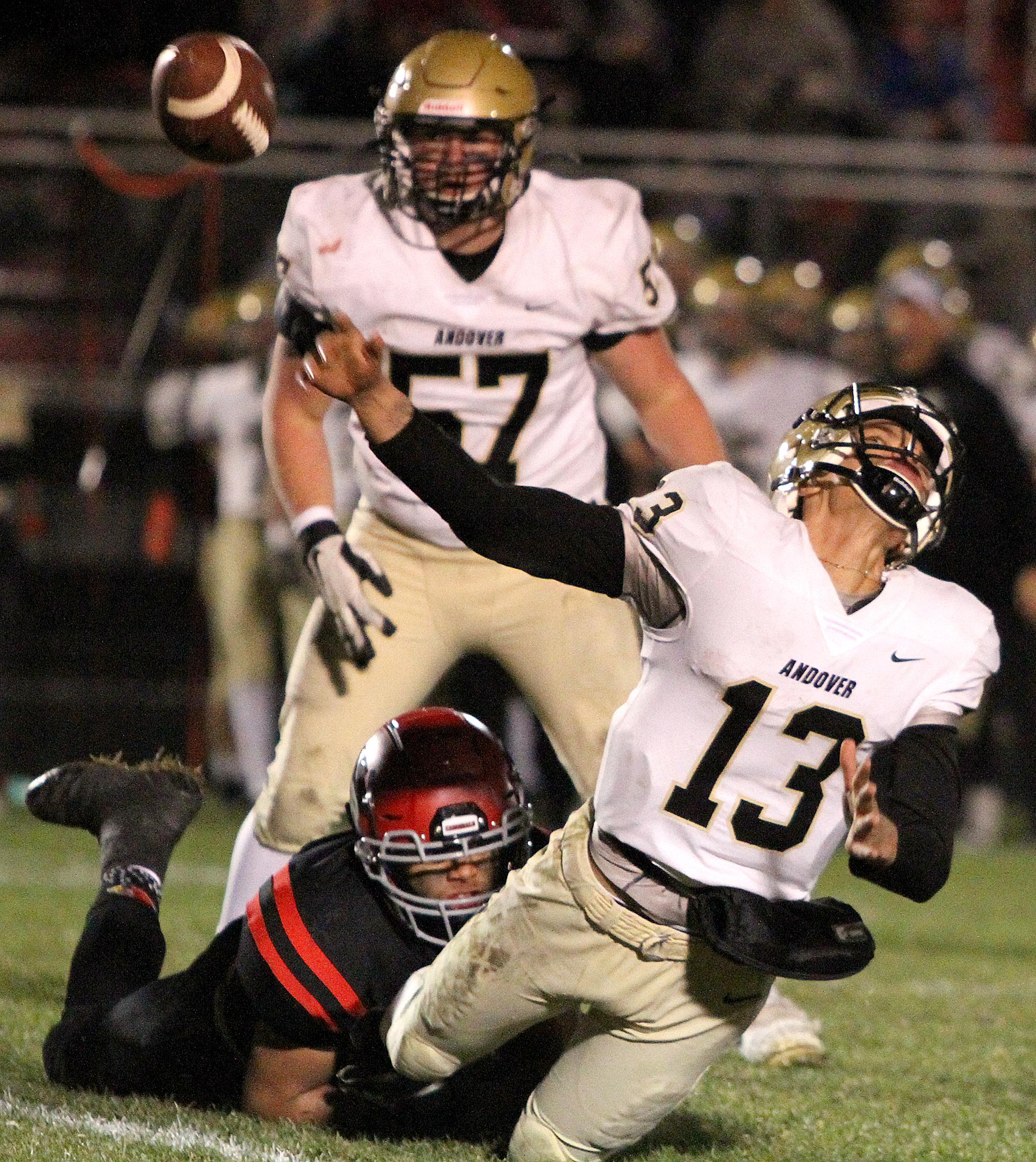 Andover junior quarterback Elijah Alexander is sacked in the second half of Friday night's game in Coon Rapids. The Huskies battled back from down 14-0 to tie the game before the Cardinals won it on a late field goal. Photo by Drew Herron, SportsEngine

It was a long time coming for the Coon Rapids Cardinals.

Coon Rapids topped Andover 17-14 at home Friday to win the Class 5A, Section 7 title and earn a trip to the state tournament for the first time since 1983.

A diving catch by Jordan Doe at the 1-yard line set up Alex Findley’s game-winning 23-yard field goal with 43.8 seconds left. Andover missed its opportunity to respond when it turned the ball over on downs and Coon Rapids ran out the clock.

The Cardinals struck first when a 47-yard run by David Geebli set up a 19-yard touchdown pass from Jake Van Hulzen to Lucky Morange. The 2-point try was unsuccessful but Coon Rapids entered the half up 6-0.

Van Hulzen completed 10 of 15 passes for 94 yards, a touchdown and an interception. Geebli had 170 rushing yards and a TD.

The Cardinals (7-3) defense also contributed two sacks on third downs, collected an interception and blocked a field goal in the first half.

Alexander finished with 10 of 23 passing for 150 yards, a TD and an interception. Frost had 89 yards rushing and a TD. 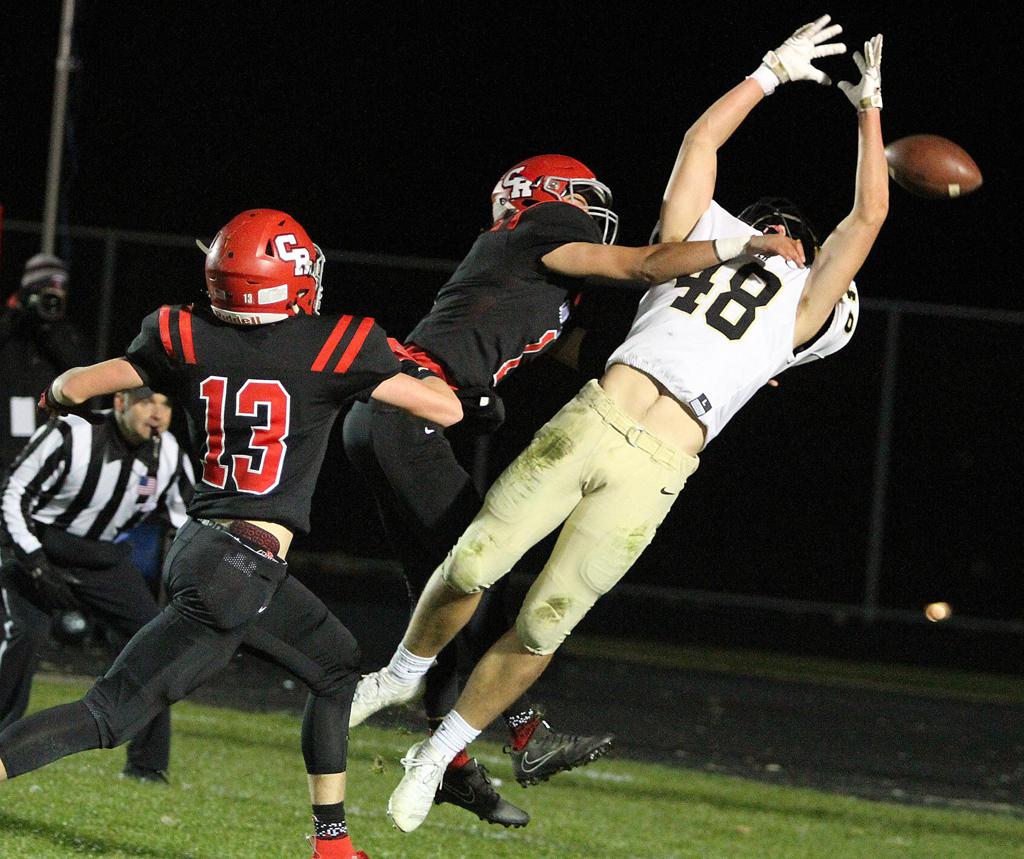 Coon Rapids junior defensive back Antonio Manos breaks up a pass intended for Andover's Jack Sharon during the first half Friday night in Coon Rapids. Photo by Drew Herron, SportsEngine