Junior quarterback David Bigaouette scored a 26-yard touchdown that helped the Sabers claw past the Eagles. 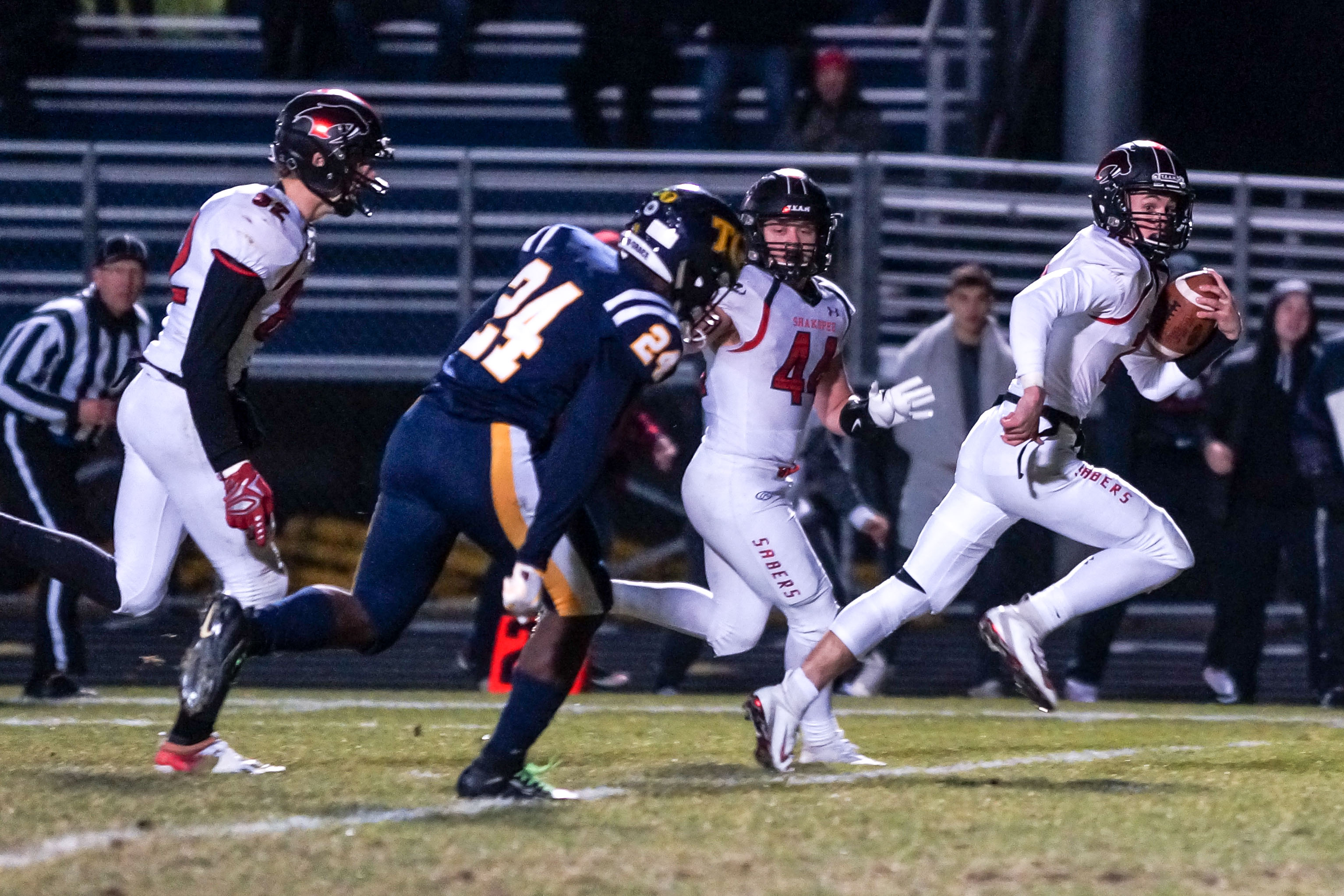 Three big plays — two offensive and one defensive —  in the first half of Friday’s Class 6A state tournament matchup in Fridley gave Shakopee a 14-0 lead over Totino-Grace at halftime, and a ground game that was mostly ineffective in the first half found its way to effectiveness in the fourth quarter for a 21-6 Sabers' win.

“We knew Totino was going to come hard,” Shakopee coach Ray Betton said. “Our schedule during the season prepared us and we played hard.”

After three drives with its offense totaling minus-7 yards to start the game, No. 4 seed Shakopee (5-5) finally broke through to get a first down in the second quarter when Sabers junior quarterback David Bigaouette completed a run that involved dragging several Totino-Grace defenders past the first-down sticks.

“We knew Totino was going to be nails tough,” Betton said. “They were as advertised up front, very physical and disciplined.”

Shakopee’s first touchdown — the first score of the game — came four plays later. Bigaouette completed a 38-yard fade down the sideline where sophomore wideout Nick Katona made a one-handed catch. The next play Bigaouette ran to his right after taking the snap, broke a couple of tackles and scampered into the end zone. 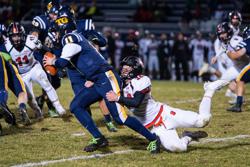 “The biggest thing for us was to stay calm,” Bigaouette said. “We know that if we do our jobs we can move the ball. My job was to get as many yards as possible there, and when I was able to get free I saw the gap, and it was fun to run into the end zone and score that touchdown.”

The final big play of the half for the Sabers came less than two minutes after Bigaouette’s touchdown.

Sabers junior linebacker Sam Treml hit Totino-Grace (7-3) quarterback Kristoff Kowalkski to cause a fumble, then Shakopee senior linebacker Luke Rudolph scooped up the loose ball and took it 41 yards to the end zone.

“It was a perfect blindside hit, he hit him perfectly,” Betton said. “We were so excited with that score. We knew that if we could get a lead going into halftime we’d be all right.”

Shakopee’s defense was formidable, keeping No. 1 seed Totino-Grace’s offense shut out through the first half. The Eagle offense, however, powered through a third-quarter drive that took more than 10 minutes off the clock, resulting in an 11-yard touchdown run by Kowalkowski. A missed extra point took a little of the excitement away from the crowd, but the Eagles were within striking distance at 14-6.

Field position was critical in the fourth quarter, and after spending much of the game giving up good field position to the Eagles, the Sabers pinned Totino-Grace to its own 1-yard line with a well-covered punt.

The Sabers converted a fourth-and-1 late in the quarter on a long run by sophomore quarterback Ben Reiland, denying Totino-Grace the ball and a chance to stitch together a game-tying drive as the next play Reiland had a 2-yard TD run.

A Sabers’ run attack that failed to break the 50-yard mark in the first half managed to put up almost 100 yards in the second half, allowing Shakopee to advance from the Class 6A Round of 16 to next week’s state quarterfinals.

“We didn’t have a lot of luck with the run game in the first half,” Bigaouette said. “But the clock was running down in the second half, and it was coming down to willpower and the want to win the game, and we had it.”

A defensive showdown between No. 1-seed Totino Grace and No. 4-seed Shakopee at Jim Totino Stadium in Fridley was appointment viewing Friday night, and it was the visiting Sabers who emerged with a 21-6 triumph to advance in the Class 6A state tournament.

Shakopee (5-5) struck first, thanks to junior quarterback David Bigaouette who broke free for a 26-yard touchdown run midway through the second quarter. A strip-sack fumble touchdown on the ensuing Totino-Grace drive gave Shakopee a 14-0 lead going into halftime.

Bigaouette completed two of his six pass attempts for 55 yards and chipped in with 55 yards on the ground as well.

Totino-Grace junior quarterback Kristoff Kowalkowski, who completed 14 of 33 passes for 116 yards, had an 11-yard touchdown run of his own at the end of a lengthy third-quarter drive for the Eagles (7-3). The Totino-Grace offense, however, could never get in synch and Shakopee sophomore quarterback Ben Reiland sealed the Sabers’ win with a 2-yard TD in the fourth quarter.

The Sabers will take on Lakeville North next week with a chance to advance to the state semifinals. 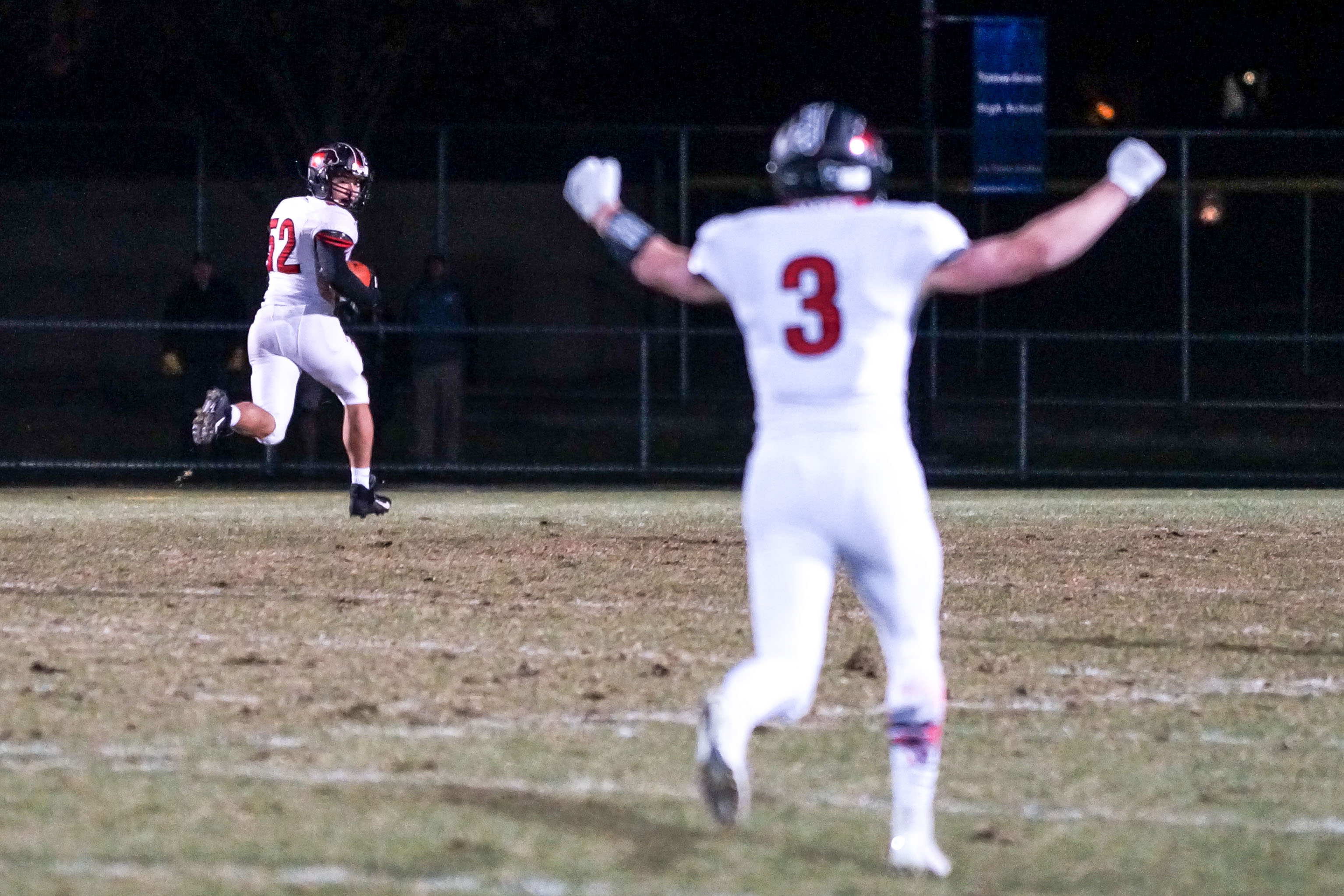 Shakopee's Luke Rudolph (52) looks back for defenders as he takes a Totino-Grace fumble in for a touchdown on Nov 1. Photo by Korey McDermott, SportsEngine