After 35-0 first half, Andover completes crushing defeat of Duluth East to advance to section final

The Huskies, who at one point led 56-0 in the fourth quarter, advance to the Class 5A, Section 7 championship game. 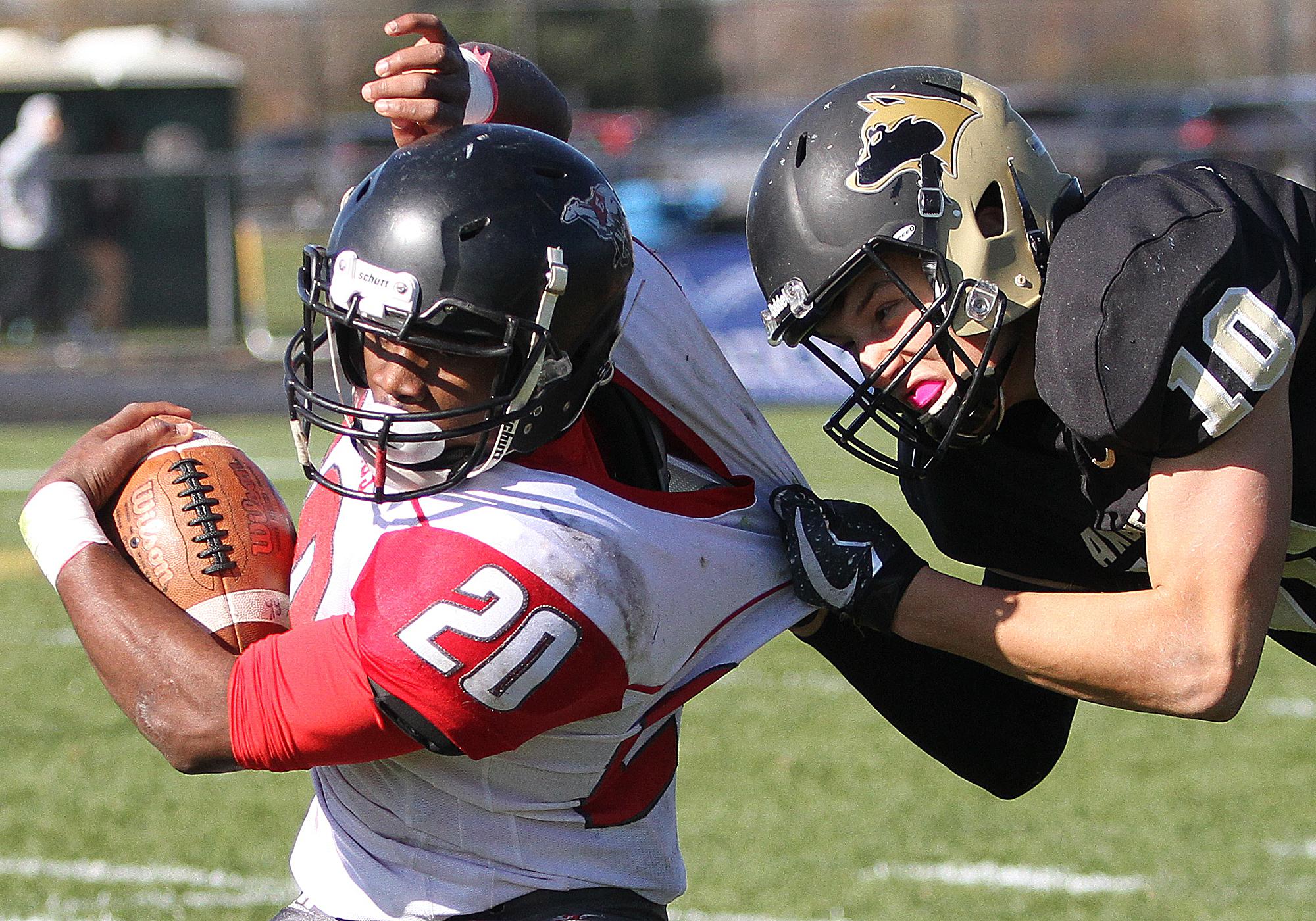 Duluth East senior running back Derek Daniels is chased down by Andover defensive back Ryan Hostad during the first half Saturday in Andover. Photo by Drew Herron, SportsEngine

With three phases to a football game — offense, defense and special teams — being the better team in two of the three phases is typically a good formula that will lead to a win.

Andover, however, was by far the better team in all three phases during its 62-12 drubbing of Duluth East in a Class 5A, Section 7 semifinal at home on Saturday, and there was one sequence of plays that showcased it.

With just under four minutes remaining in the first quarter, Andover, which had a 7-0 lead, stopped the Greyhounds (5-4) on third down to force a fourth-and-9. The Greyhounds ran a fake punt that was sniffed out by the Huskies’ punt team, getting them the ball back on their own 45-yard line. On the very next play, the Huskies (5-4) perfectly executed a 55-yard play-action pass from Elijah Alexander to Keaton Leukam for a touchdown.

“The defense bailed us out in that first quarter really, and we got some shorts fields,” said Andover coach Rich Wilkie. 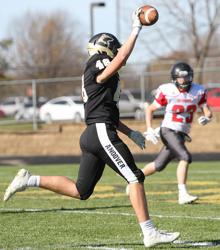 That play broke the game open for the Huskies, and they were running from there, eventually building a 56-point cushion in the fourth quarter.

Andover’s defense was dominant, as Wilkie described their effort as “phenomenal.” The Huskies were stout, giving up just 182 total yards. Andover’s Jack Sharon scored the game’s opening touchdown, a 6-yard interception, which set the tone for the game. The Huskies got two more turnovers, with Justin Kenning recovering a fumble and Andrew Schumacher added an interception.

On the offensive end, the dynamic rushing duo of Caden Wheeler and Dylan Frost paved the way for Andover.

“They’re a good one-two punch, they’re different running backs,” Wilkie said. “Caden is more of a speed, bounce-back, and Dylan is a little more downhill, between the tackles guy.”

“Having Dylan’s awesome because he’s more of a hammer. I’m more of a speed back, so it’s really nice. The defense doesn’t really know how to combat it; it’s pretty awesome,” Wheeler said of his backfield counterpart.

The Greyhounds were able to score some late points thanks to the play of Caden Edwards. He ran in a 7-yard touchdown and threw a 5-yard touchdown pass to Jaxon Edwards to avoid the shutout.

The Huskies will travel to Coon Rapids on Friday to play for the Class 5A, Section 7 championship, with a shot to advance to the state tournament.

“They have probably the best team they’ve had in 10 years, so we’re excited. I think they’re very talented, we’ll have to play really well,” Wilkie said. “We have a good record on the road in section championships, so hopefully that’ll be one of them.” 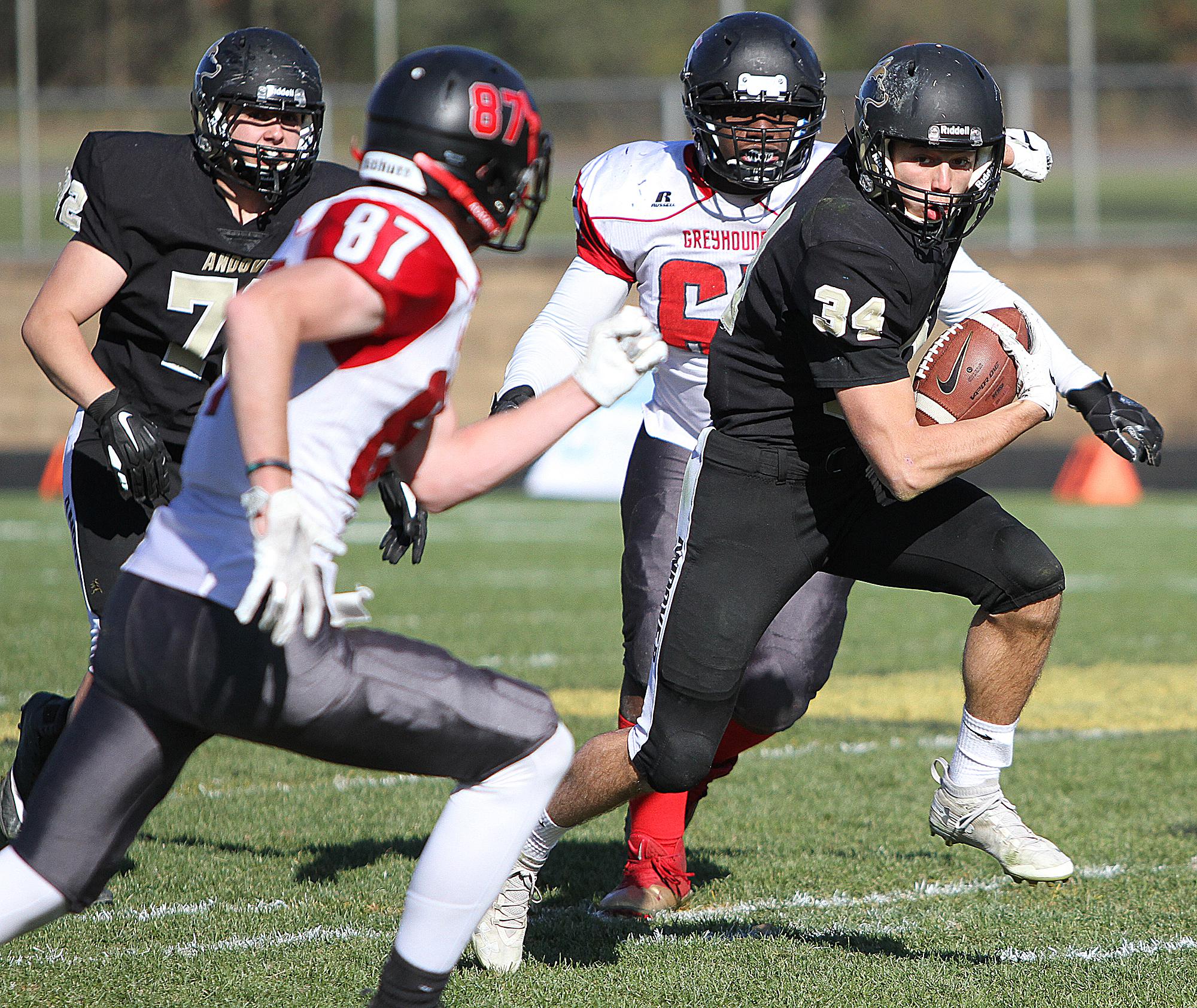 Andover is moving on to the Class 5A, Section 7 championship game after drubbing Duluth East 62-12 at home Saturday afternoon.

The Huskies (5-4) struck early, starting their scoring parade with an interception return for a touchdown by linebacker Jack Sharon during Duluth East’s first drive of the game.

After the Huskies forced a turnover on downs on the next Duluth East possession, Elijah Alexander threw a 55-yard TD to Keaton Leukam, and the rout was on.

Leukam finished with 95 receiving yards and two touchdowns, while Alexander threw for 134 yards and a pair of TDs, and added 27 yards on the ground.

Andover featured running back tandem Dylan Frost and Caden Wheeler, as they combined to run all over the Greyhounds (5-4). Frost had 62 yards and two TDs while Wheeler had 128 yards and three touchdowns.

Andover’s defense stifled the Greyhounds’ running game, as the Huskies allowed just 28 yards on the ground.

The Greyhounds found limited success late through the air, as Caden Edwards finished the game with 160 yards passing and a pair of touchdowns — one via the air and one rushing. Teammate Jaxon Edwards was his leading receiver, tallying 68 receiving yards and a touchdown. 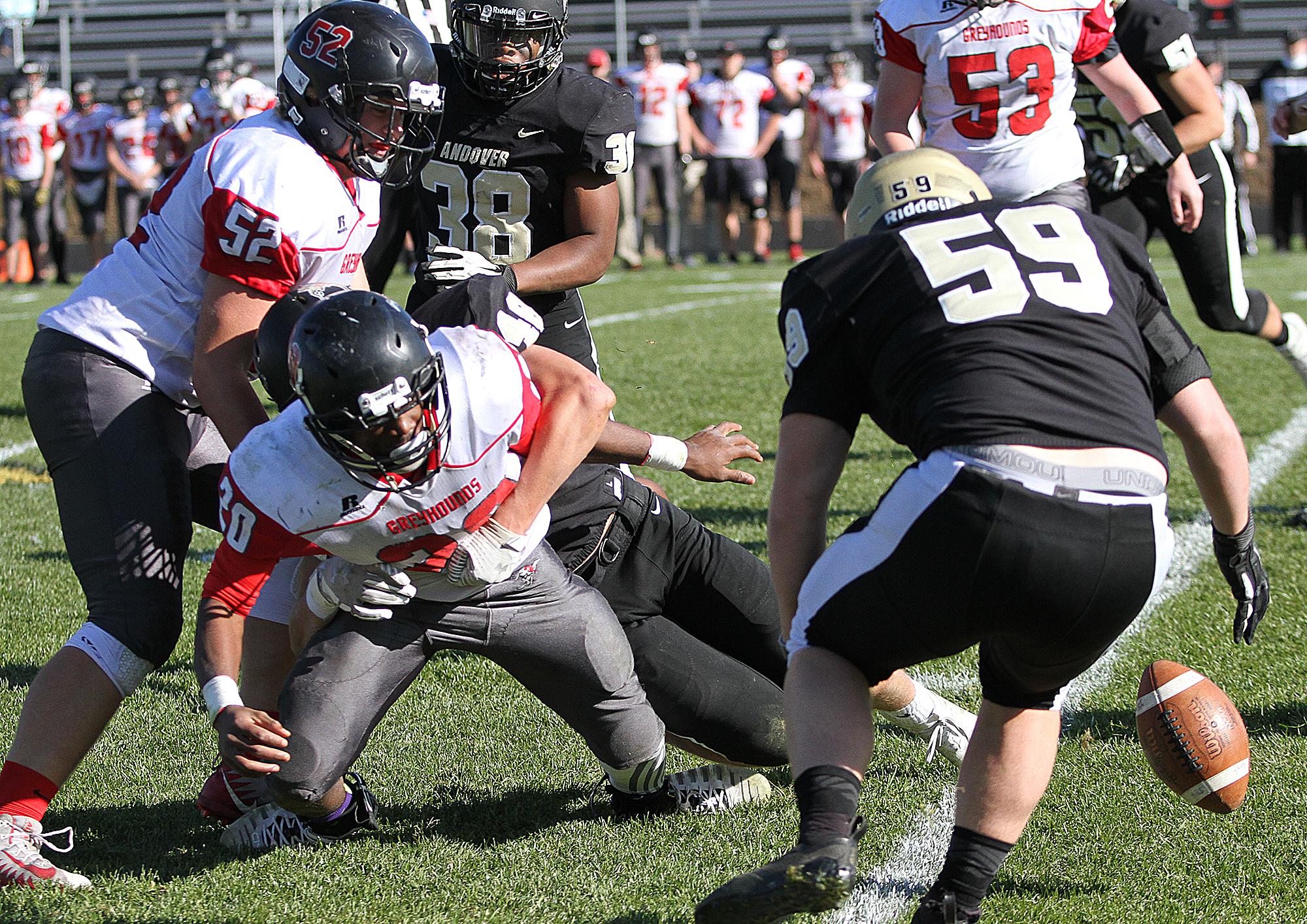 Andover defensive lineman Justin Kenning (59) recovers a fumble late in the second quarter. The takeaway set up a quick score by the Huskies, who raced to a 35-0 first-half lead over visiting Duluth East Saturday. Photo by Drew Herron, SportsEngine