Quarterback Aidan Bouman led the Bison aerial attack, completing 31 of 44 passes for 364 yards and two touchdowns against the Knights. 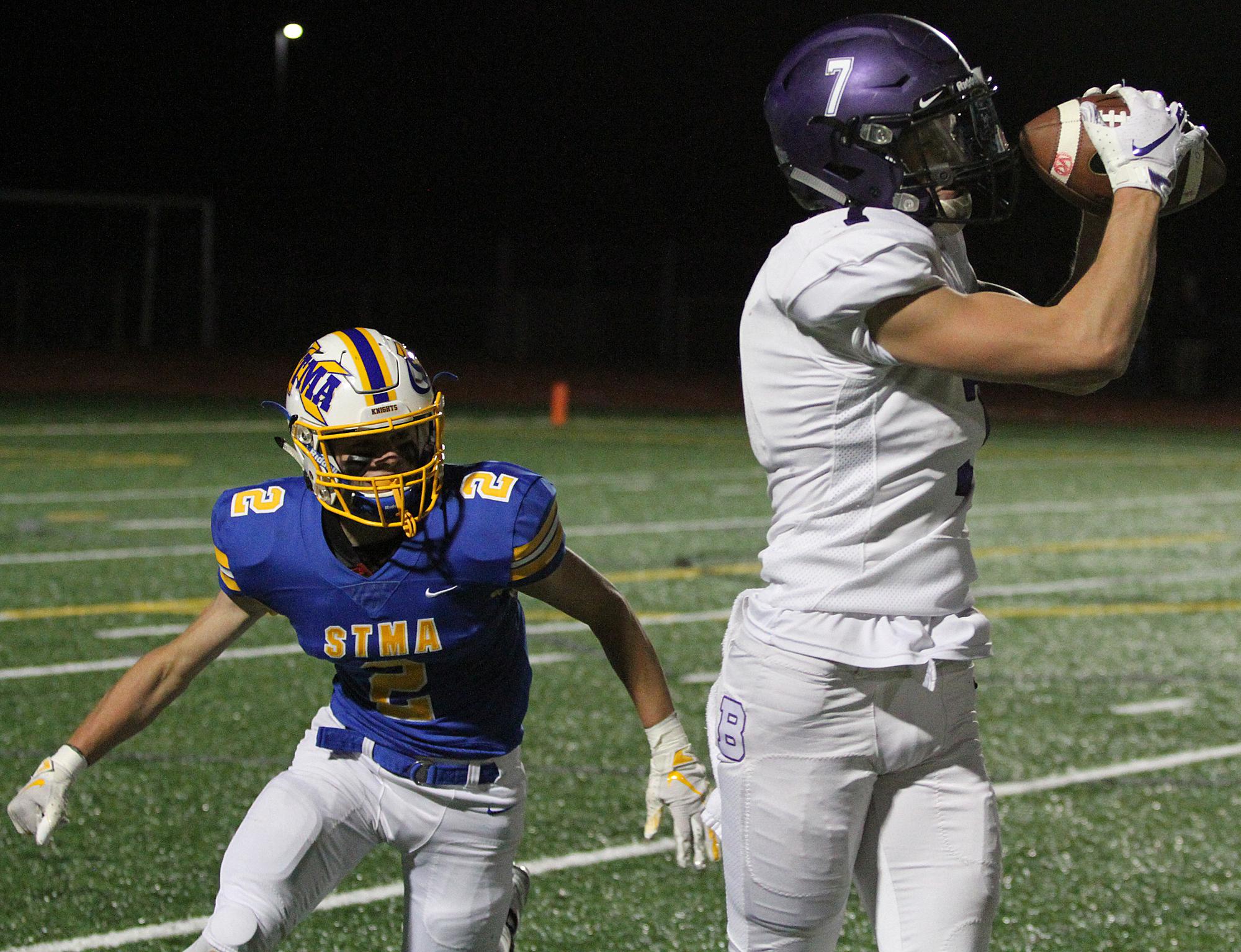 Buffalo's Trevor Johnson hauls in a catch late in the first half as STMA'S Garrett Peterson moves in for the tackle. Buffalo scored the game's first 17 points en route to a 17-14 upset victory. Photo by Drew Herron, SportsEngine

Buffalo coach Todd Bouman didn’t have words for his team after the Bison defeated St. Michael-Albertville 17-14 Friday in St. Michael to claim their first Class 6A state tournament win

Bouman’s son, quarterback Aidan Bouman, did have a word: unbelievable.

That’s what many onlookers might have thought, as No. 6 seed Buffalo (5-4) topped No. 3 seed St. Michael-Albertville (5-4) with an aerial attack that’s given teams fits for the last few years. It was the first postseason win for Buffalo since 2013, and also the first in five tries since the Bison moved up to Class 6A.

Buffalo presents a unique challenge for teams to prepare for, with a spread offense that not only features lots of four- and five-receiver sets, but attacks a lot of different areas of the field.

Bouman, who’s led the state in passing yards each of the last three seasons, went 31 of 44 for 364 yards and two touchdowns against St. Michael-Albertville. Even two interceptions couldn’t derail the Bison as they went up 17-0 early in the third quarter, then marched down the field to ice the game after the Knights got within three midway through the fourth quarter.

“It’s much different than a lot of high school teams see,” Todd Bouman said. “When you have a quarterback like Aidan that can take advantage of a lot of stuff, it makes it to your advantage.” 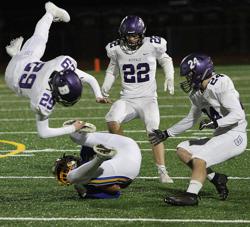 Buffalo features the leading receiver in the state in yards (1,168), catches (83) and touchdowns (15), in Michael Tweten. With the Knights focused on stopping Tweten, teammate Trevor Johnson found plenty of room, and Aidan Bouman found him for 10 catches, 131 yards and the first touchdown of the game.

Luke Gunderson added six catches for 112 yards and a 54-yard TD on the opening drive of the third quarter that gave Buffalo a 17-0 lead. Tweten finished with four catches for 37 yards, and running back Isaiah Karels had 10 catches for 78 yards, including some big chunks on check-down plays on third and fourth downs and a 14-yard catch-and-run on fourth down on the final drive of the game to effectively seal the win for Buffalo.

“We knew that they haven’t had to cover that many passing sets in a while,” Johnson said. “We knew we could do our thing and roll with it.”

The depth of the receiving corps shined Friday as Aidan Bouman, an Iowa State commit, let routes develop and for the most part his decision-making ability seemed locked in throughout the game.

“I love Trevor and he did a fantastic job,” Aidan Bouman said. “He always did the right routes, he has great hands — probably the best hands on the team. And I’ll give credit to Michael Tweten — he’s the leading receiver in the state in every single category right now. Teams come out to stop him. We’re lucky that we have three [other] guys that will come out and beat them — so they’ve got to stop all four, and they just can’t.”

Todd Bouman said the impressive thing with Tweten and Johnson is they were defensive backs until this year.

“Every game each week, they continue to get better and better,” Todd Bouman said. “Their work ethic and their understanding how to run routes, how to set up routes, and they’ve got great hands. Just can’t say enough about them.”

The only other matchup where St. Michael-Albertville, ranked No. 10 in the final Class 6A statewide Associated Press poll this season, was tested in the passing game this season was against Edina, which resulted in a 34-29 win for the Knights on Sept. 27 when they had to get a touchdown in the game’s final minute to come back and claim victory.

Buffalo offered a new challenge, and the Knights gave them credit for executing.

“They’re hard to prep for,” Knights coach Jared Essler said. “You know what they’re going to do, and they do it pretty well. That was what we expected coming into the game; [Bouman] was going to throw it 40 or 50 times. We tried to mix up some looks and do some different things, but he did pretty well.” 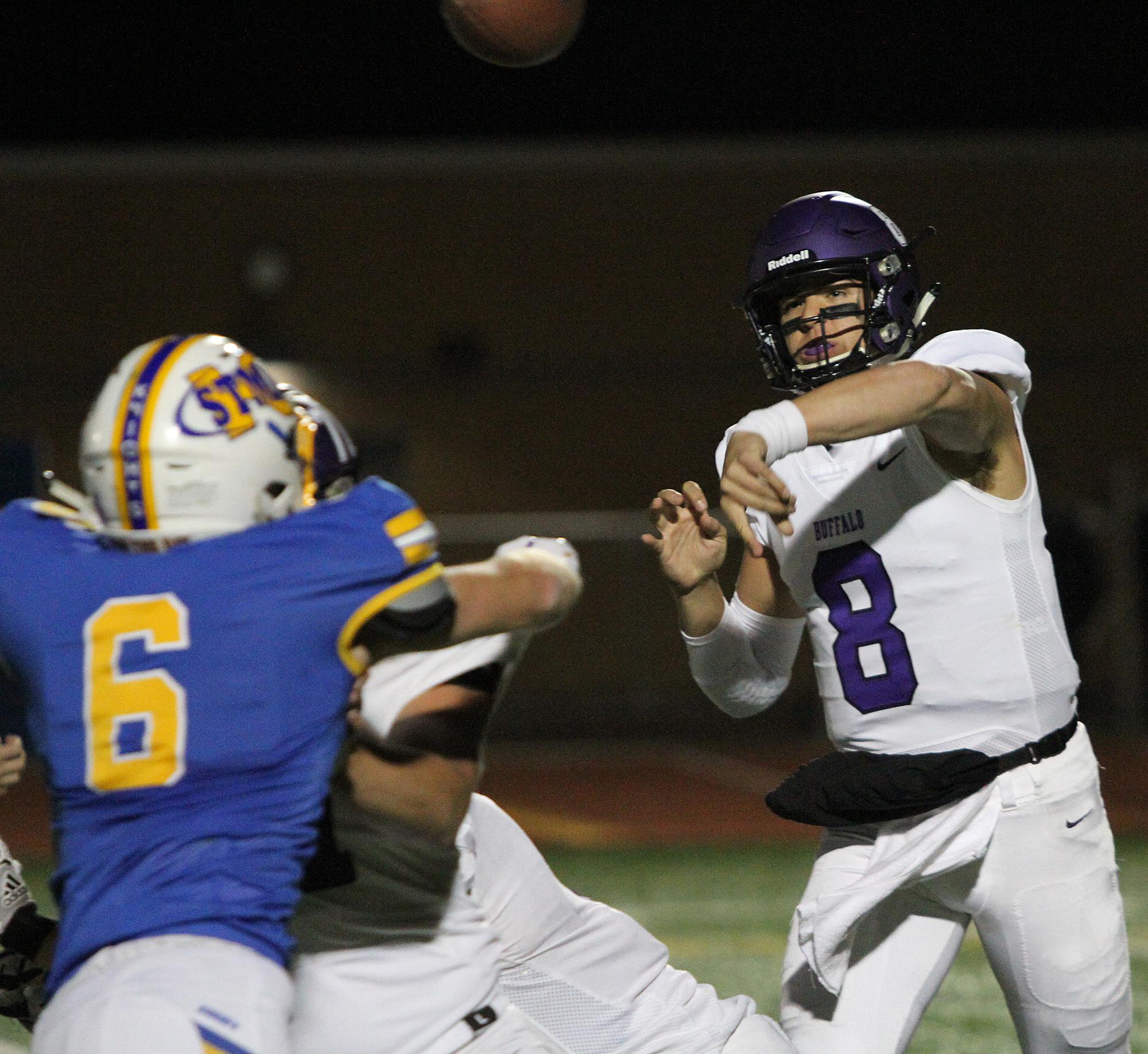 It took some time, but Buffalo broke through in the playoffs.

In the Bison’s fifth season in Class 6A, they finally notched a state tournament win by going on the road as a No. 6 seed and topping No. 3 seed St. Michael-Albertville 17-14 Friday in the first round.

The Knights, ranked No. 10 in the final Class 6A statewide Associated Press poll this season, got within three with a pass from Kolby Gartner to Kale Hoselton with 6 minutes, 39 seconds to play. But Buffalo was able to drive and run out the clock on the ensuing possession to hold on and win.

Buffalo opened the scoring in the second quarter by going on an 83-yard touchdown drive following a failed fourth-down conversion by St. Michael-Albertville (5-4) at the Bison 17-yard line. It was capped by a 17-yard touchdown pass from Aidan Bouman to Trevor Johnson.

The Bison (5-4) led 10-0 at halftime, getting a 34-yard field goal from Parker Vajda as time expired in the second quarter.

Buffalo opened the second half with a touchdown drive, scoring on a 54-yard catch-and-run from Bouman to Luke Gunderson to make it 17-0.

The Knights responded with a scoring drive of their own, converting twice on fourth down before Ben Fiedler punched in a 1-yard TD to make it 17-7.

Buffalo will play at Mounds View in the round of 16 next week. 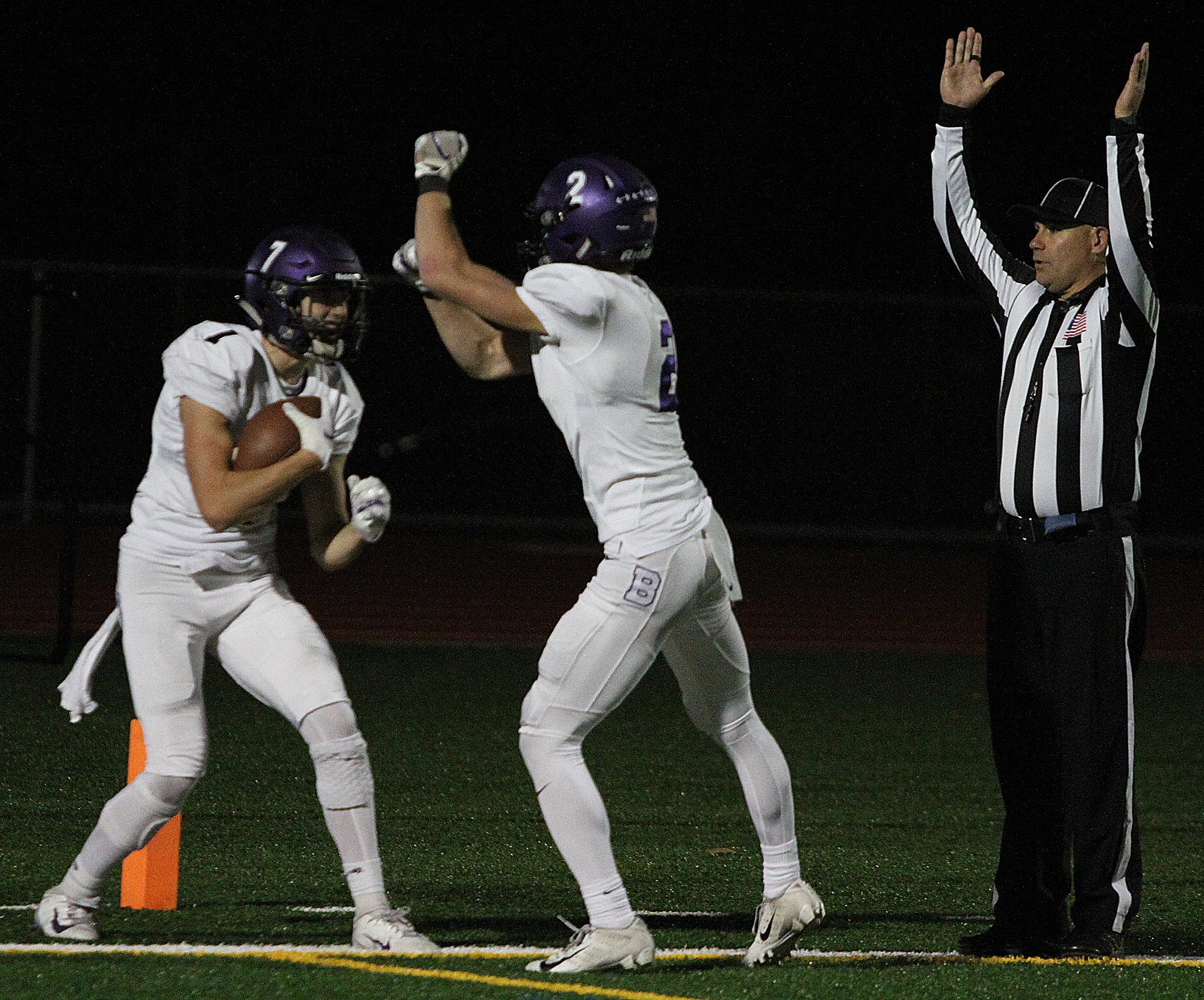