While Wayzata is the only undefeated team in Class 6A, Champlin Park earned the first-round bye through random draw. With a look at top seeds in other classes as well. 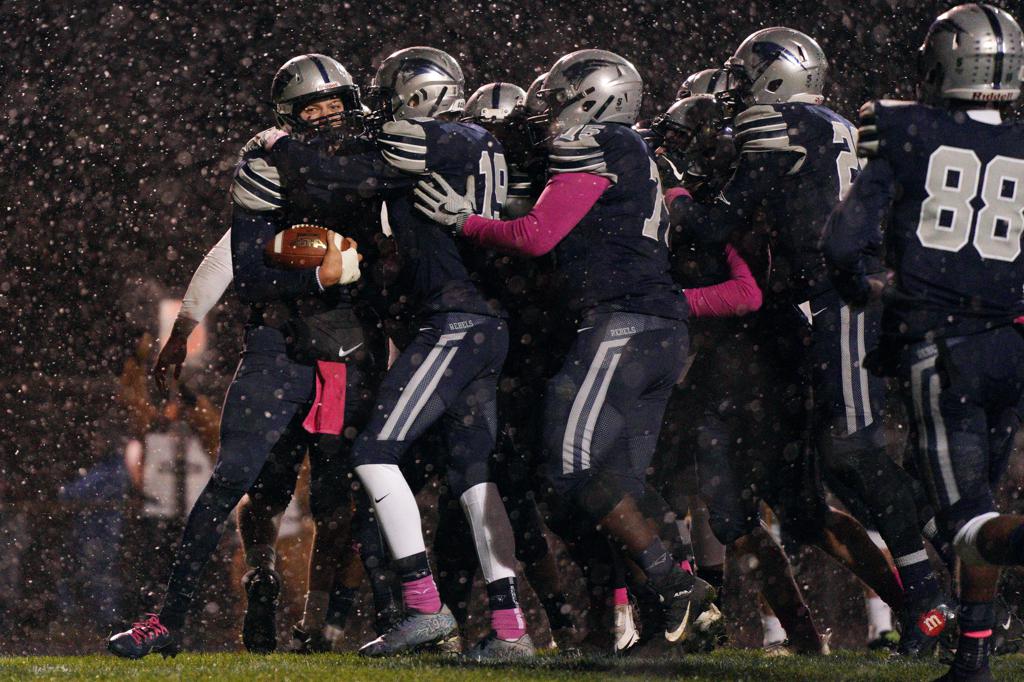 Champlin Park quarterback Jaice Miller (4) was mobbed by his teammates after he scored a touchdown against Totino-Grace on Oct. 11. The Rebels are one of four No. 1 seeds in the Class 6A state tournament and earned a first-round bye. Photo: ANTHONY SOUFFL

Undefeated Wayzata, a pair of one-loss teams in Champlin Park and Lakeville South, and Totino-Grace were awarded the four No. 1 seeds in the Class 6A state football tournament bracket released Thursday morning.

Wayzata, expected to be seeded No. 1 in Section 6, posted an 8-0 record and is the only undefeated team in Class 6A. Champlin Park (7-1) earned the top spot in Section 5 as the only one-loss team in the section. That rationale held true as well for Lakeville South (7-1) in Section 3.

As for Totino-Grace in Section 4, the Eagles and Mounds View both finished the regular season with 6-2 records. Section coaches voted to award the top spot to Totino-Grace largely on the strength of the Eagles’ losses to fellow No. 1 seeds Lakeville South and Champlin Park by a combined eight points.

While Wayzata had the best record, Champlin Park was the lucky recipient of the first-round bye in the 31-team field.

Here’s how the brackets were determined: After all four sections seeded their teams, the teams were slotted into six different pre-determined brackets. The bracket that became the official state tournament bracket was then selected through a random draw.

Class 6A was originally formatted as a 32-team field, but that was changed to 31 teams when Coon Rapids petitioned to drop to Class 5A after the 2016 season.

In 2017, Cretin-Derham Hall got a first-round bye and advanced to the 6A semifinals, where it was defeated by Minnetonka 17-14. Last year, the bye went to Eden Prairie, which fell to Lakeville North in the state championship game.

Hopkins posted a 6-2 record but picked up a No. 7 seed in Section 6 and will play at Lakeville North in the first round. The Royals’ seemingly low seed is due to their regular-season schedule, which consisted of seven games against Class 5A teams. The only game they played against a fellow 6A team was a 14-6 victory at Forest Lake on Sept. 13.

The first round of the Class 6A playoffs will take place on Friday, Oct. 25.

Other classes with metro-are teams

In Class 3A, Glencoe-Silver Lake was seeded No. 1 in Section 2. Sections 4 and 5 had not released official seedings Thursday morning, but Breck is expected to take No. 1 seed in Section 4 and Annandale in Section 5 due to higher QRF (Quality Results Formula) ratings. Both sections use QRF to determine seedings. Undefeated Minneapolis North (8-0) was seeded No. 1 in Class 2A, Section 4.

The playoffs for all classes other than 6A begin Tuesday. The Class 6A tournament starts with games on Oct. 25.