As regular season ends Wednesday, who will get the No. 1 section seeds?

Some teams appear to be locks to get top billing, which comes with a home game. Other sections are up in the air. 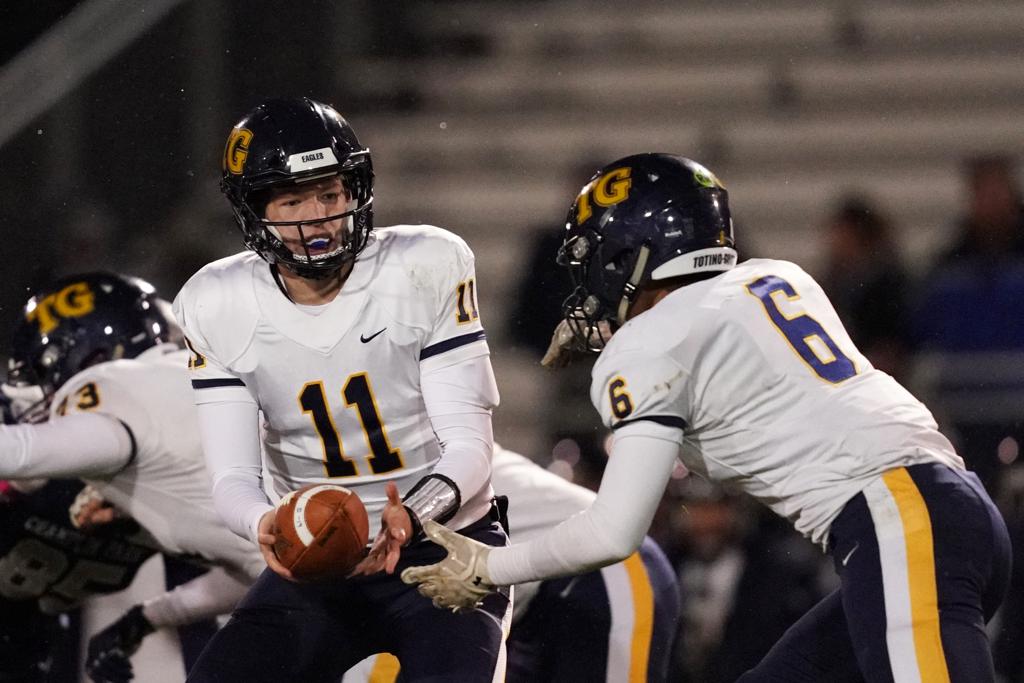 Totino-Grace quarterback Kristoff Kowalkwoski handed the ball off to Totino-Grace fullback Isiah Traufler. The Eagles have a shot at the top seed in Class 6A, Section 4. Photo: Anthony Souffle * anthony.souffle@startribune.com

With Wednesday being the last night of the regular season in football, it’s time to sort out who will be the likely No. 1 seeds among metro-area sections.

Many, but not all, of the sections use the QRF (Quality Results Formula) to determine seedings.

In Class 6A, where there are only four sections (Sections 3-6), Lakeville South will be the top seed in Section 3 and undefeated Wayzata in Section 6.

The other two sections are much more uncertain. Three teams — Mounds View, Totino-Grace and Woodbury — still have a shot at the No. 1 seed in Section 4. Woodbury is 4-1 against section teams and has won four in a row. But the Royals lost a head-to-head matchup with Mounds View. Totino-Grace will face a section foe for the first time when it plays Cretin-Derham Hall in the season finale.

In Section 5, Centennial’s 7-0 victory over St. Michael-Albertville made Champlin Park the likely top seed if it beats Maple Grove on Wednesday.

In Class 5A, Chaska, St. Thomas Academy and Tartan have No. 1 seeds locked up. In Section 5, Spring Lake Park, Minneapolis Southwest and Cooper are all still in the running for the No. 1 seed. In Section 6, Armstrong and Elk River are undefeated, and if both teams remain that way Armstrong will get the nod. In Section 7, Coon Rapids will be No. 1 if it wins Wednesday, despite having lost two in a row.

In Class 4A, No. 1 seeds will be Hutchinson (Section 2), Simley (3), Fridley (4) and Becker (6). Benilde-St. Margaret’s likely will get the top seed in Section 5 over defending state champion SMB if both teams finish undefeated.

In Class 3A, Dassel-Cokato (Section 2) and Annandale (Section 5) play Wednesday with top seeds at stake. Breck needs Cannon Falls to struggle Wednesday if it hopes for the top slot in Section 4.

In Class 2A, Minneapolis North — which hasn’t lost a regular-season game since 2013 and is ranked No. 1 in the QRF — is almost certain to nail down the No. 1 seed in Section 4.

1. Wayzata (7-0): The Trojans found out what everyone else already knew in their 14-7 victory over Shakopee: The Sabers are no pushovers.

2. Lakeville South (6-1): Any lingering questions about the Cougars are long gone after they crushed Farmington 61-6.

3. Lakeville North (6-1): No RaJa Nelson for the Panthers on Friday, but they got back to their winning ways by handling White Bear Lake 23-7.

4. Champlin Park (6-1): After back-to-back victories over Rosemount and Totino-Grace, the Rebels proved themselves to be among the state’s best.

5. St. Michael-Albertville (5-2): The Knights offense sputtered against Centennial in a 7-0 loss, their fourth game this season decided by a touchdown or less.

6. Eden Prairie (5-2): Was their 35-0 flattening of Prior Lake a sign that things are getting back to normal for Eagles Nation?

8. Mounds View (5-2): So much of the Mustangs’ lofty ranking was based on their shutdown defense, but that defense allowed 41 points, including two TDs in a span of nine seconds late in a 41-40 loss to East Ridge.

10. Centennial (5-2): A hard-nosed defense and a QB (Connor Zulk) adept at running the read option make the Cougars a test for anyone.