A 21-point outburst in the third quarter helped the Falcons remain undefeated en route to a 35-21 victory. 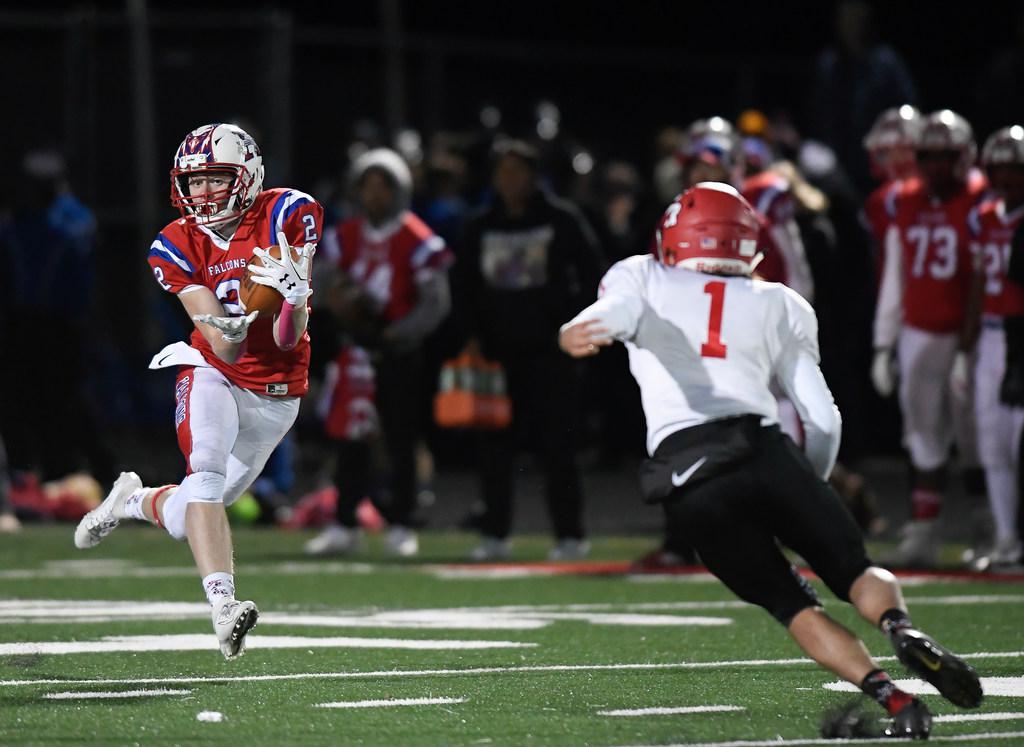 Armstrong wide receiver Nick Barrett (2) caught the ball for a first down before bracing for a hit by Coon Rapids safety Antonio Manos (1) in the first half Friday. Photo: Aaron Lavinsky • aaron.lavinsky@startribune.com

It was not unexpected, but Armstrong coach Jack Negen was still frustrated by the way his Falcons came out in a 35-21 come-from-behind victory over Coon Rapids.

In the first quarter-and-a-half Friday at Armstrong, the Cardinals (4-2) sliced through the Falcon defense with relative ease, building a 14-0 lead on two touchdown runs by quarterback Jake Van Hulzen.

“I didn’t really like that first half,” Negen said. “It was a physical game and they dominated us physically. I was frustrated, honestly. These homecoming weeks, they’re weird.”

But there’s something special going on at Armstrong, which improved to 6-0 this season, much of it tied to the leadership and never-say-die nature of senior quarterback Jake Breitbach, not seven months removed from a torn ACL in his left knee.

Breitbach, whose knee had kept him from running the ball much until Friday, resembled the dual-threat he was a year ago. He rushed for 80 yards after halftime and engineered an offense that scored 35 unanswered points, turning a potential disaster into a delightful game.

Negen was bothered because his team hadn’t been dominated like that all year. How it responded put a smile back on his face.

“Yeah, we got punched in the mouth,” Breitbach said. “We were a little surprised coming out, but we just buckled down and did what we knew we could do.”

Armstrong got rolling late in the first half after it trailed 14-0. Facing second-and-19, Breitbach hit receiver Nick Barrett for a 33-yard gain down the left sideline. The play seemed to flip a switch for Armstrong, which moved crisply downfield and cut the deficit to 14-7 on a 21-yard fade pass from Breitbach to Jordan Lewis.

“I told our team that was good for us,” Negen said. “We haven’t been in that spot. Now, we have to see what happens.”

What happened was a 21-point third-quarter blitz by Armstrong. Breitbach weaved for an 8-yard score to tie the game. Backup running back Aboubacar Kourma powered in from 3 yards. Finally, Breitbach found Barrett for a 38-yard touchdown.

A 14-point deficit was now a 14-point lead for Armstrong. Both teams added fourth-quarter touchdowns, but by that point, the outcome was decided.

“At the beginning of the second half, we just had a mentality switch,” Barrett said. “We knew we had this in us, we just had to dig deep.”

The Falcons, playing at home, trailed 14-0 early in the second quarter as Coon Rapids moved up and down the field with ease. The Cardinals got touchdown runs of 1 and 16 yards from quarterback Jake Van Hulzen, silencing an Armstrong homecoming crowd.

The Falcons cut the lead to 14-7 at halftime on a 21-yard fade pass from quarterback Jake Breitbach to Jordan Lewis.

Armstrong took control with a 21-point third quarter. Breitbach ran for a score and threw a 38-yard touchdown pass to Nick Barrett, sandwiched around a 3-yard scoring run by Aboubacar Kourma.

A 24-yard end-around pass from Thai Bowman to Lewis in the fourth quarter extended the lead to 35-14 for Armstrong, which improved to 6-0.

Coon Rapids (4-2) got a late touchdown from David Geebli for the final margin.