Bigaouette, a junior quarterback, ran in four tochdowns to help guide the Sabers past the Ponies. 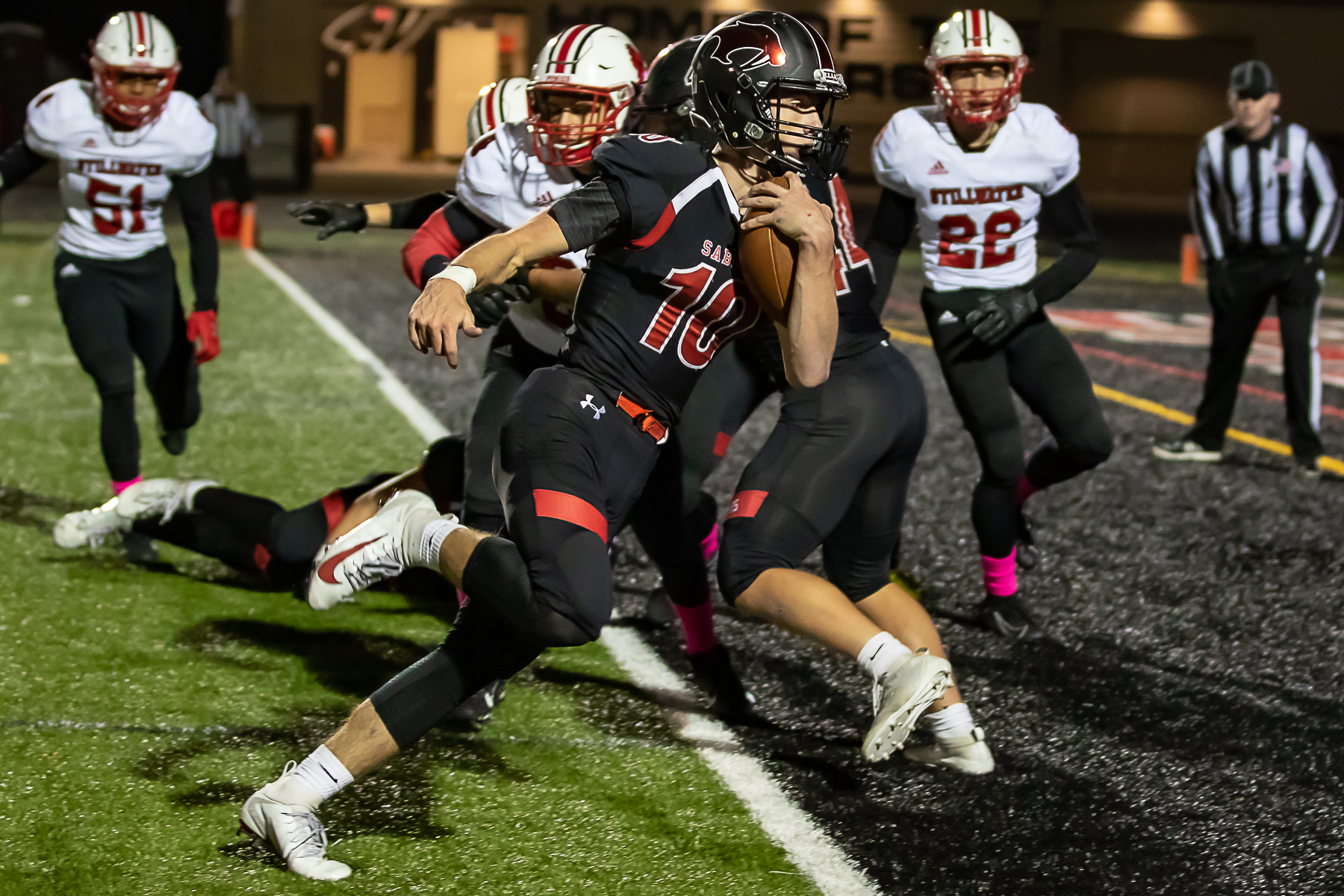 Shakopee coach Ray Betton has run an option offense his entire coaching career. But his methodology has shifted, from employing a shotgun-focused option offense with his previous teams, to running a triple-option offense while in charge of the Sabers.

“We ran this offense back when I was at Simley and we brought it here,” Betton said. “The boys are doing a great job of understanding what it takes to run it.”

Betton’s quarterback this season, David Bigaouette, has needed several weeks of game reps to run Betton’s offense at peak effectiveness, with the junior working on how to read a defense, and determine whether to hand the ball off to a running back or keep it himself to try and make a play.

“We said at the beginning of the year that we need to be playing our best football in weeks six, seven, and eight,” Betton said. “We’ve made some mistakes that hurt our win total in weeks one through five and we just put it all together tonight.”

The work of the first five weeks paid off Friday night, as Shakopee (3-3, 1-3) turned in a dominant performance, putting up more than 400 yards of offense while staying true to the option running game in a 34-7 Homecoming victory over Stillwater at Shakopee West Junior High School. 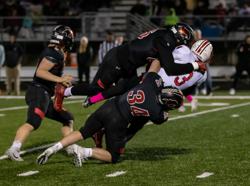 Betton and Bigaouette, who ran in four of his team’s five touchdowns against the Ponies (2-4, 2-2), knew that their run-focused option offense would leave room for big passing plays when the defense over-committed to stopping the run. The Sabers took advantage of that on consecutive plays in their opening possession, completing passes of 14 and 37 yards to help set up a 2-yard touchdown run by senior running back Jack Casey.

“We came out committing to the run knowing that it would suck them in,” Bigaouette said. “Then we were going to go over the top and that’s what we did.”

Betton talked about what else it takes to be the quarterback in his offense.

“You watch any option offense, the quarterback is the ball distributor,” he said. “He needs to be mentally focused when checking in and out of plays, but he also has to be able to run the same plays over and over again, even when he is getting popped.”

While Stillwater’s offense was being suffocated by an unrelenting Shakopee defense, Betton was on the sideline telling his quarterback that even though the offense was being effective, there were still cutback lanes available that could be exploited for explosive plays.

“I told him at halftime that he just needed to keep doing what he was doing and eventually he’d find that cutback lane,” Betton said. “He finally found it. He also got some great downfield blocking and got some good blocks from our receivers.”

On the final play that Bigaouette was under center, he found his cutback lane.

Breaking a couple of arm tackles before heading to the far sideline, Bigaouette outraced two Stillwater defenders into the end zone with an 83-yard touchdown run. The fourth quarter touchdown jaunt gave the large crowd, bolstered by the Homecoming and Shakopee Hall of Fame festivities that took place at halftime, one last score to cheer.

“It was a good game and we realized we could really run our stuff,” Bigaouette said. “We just need to work on perfecting our craft.” 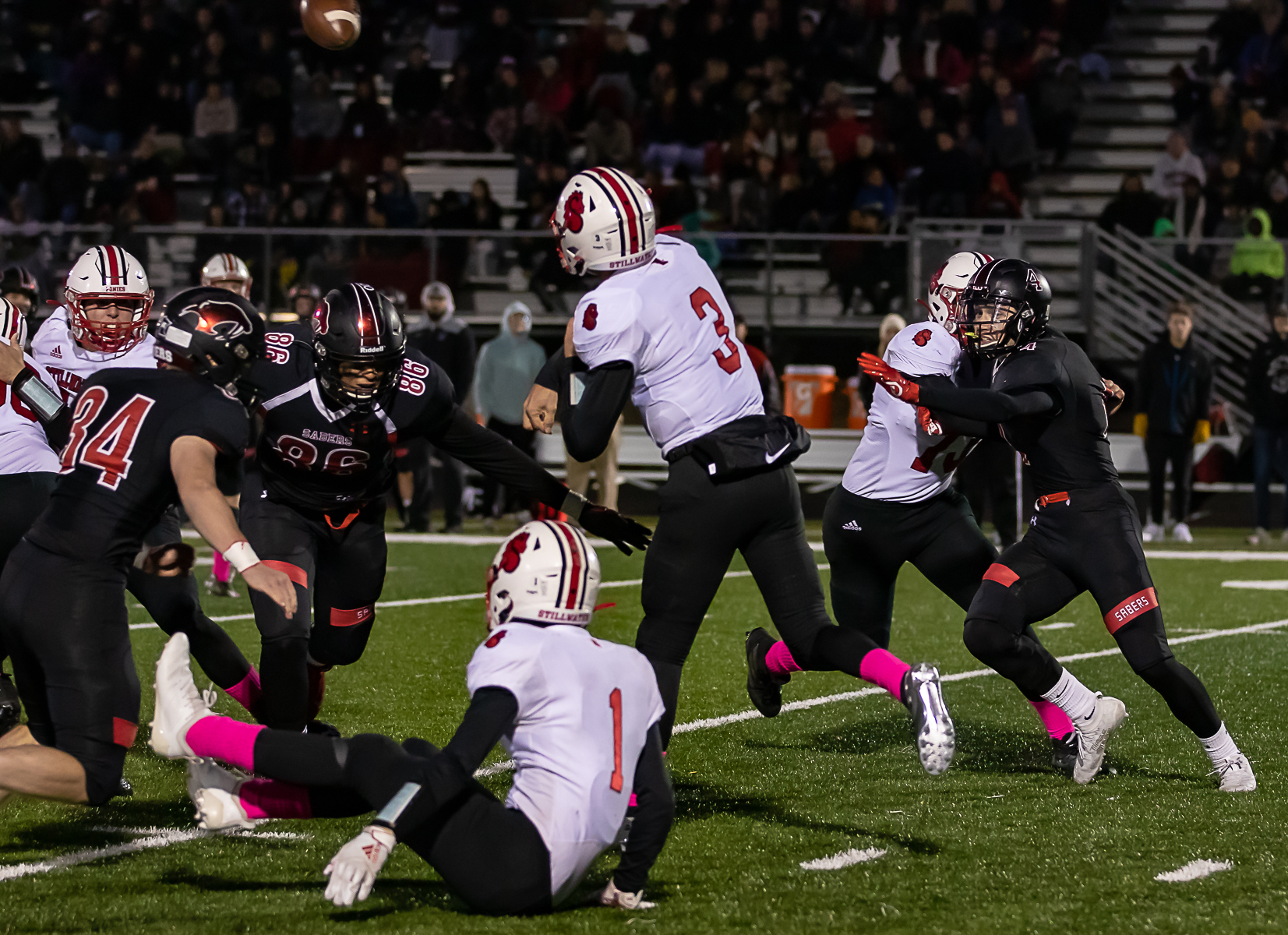 Shakopee's aggressive defense was key in its 34-7 win against Stillwater on Friday night in Shakopee. Photo by Gary Mukai, SportsEngine

Shakopee junior quarterback David Bigaouette ran for 211 yards and four touchdowns to lead the Sabers to a 34-7 homecoming victory over Stillwater on Friday at Vaughan Field.

Bigaouette also completed two of five passes for 51 yards and an interception. Both completions took place on the Sabers’ (3-3, 1-3) first touchdown drive.

Ponies (2-4, 2-2) junior quarterback Casey Venske was the main offensive option for his team, completing eight of 32 passes for 95 yards and an interception. Senior running back Jacob Day added 35 yards on the ground.

Stillwater’s lone TD came on a 77-yard fumble recovery with 1:30 left on the clock. 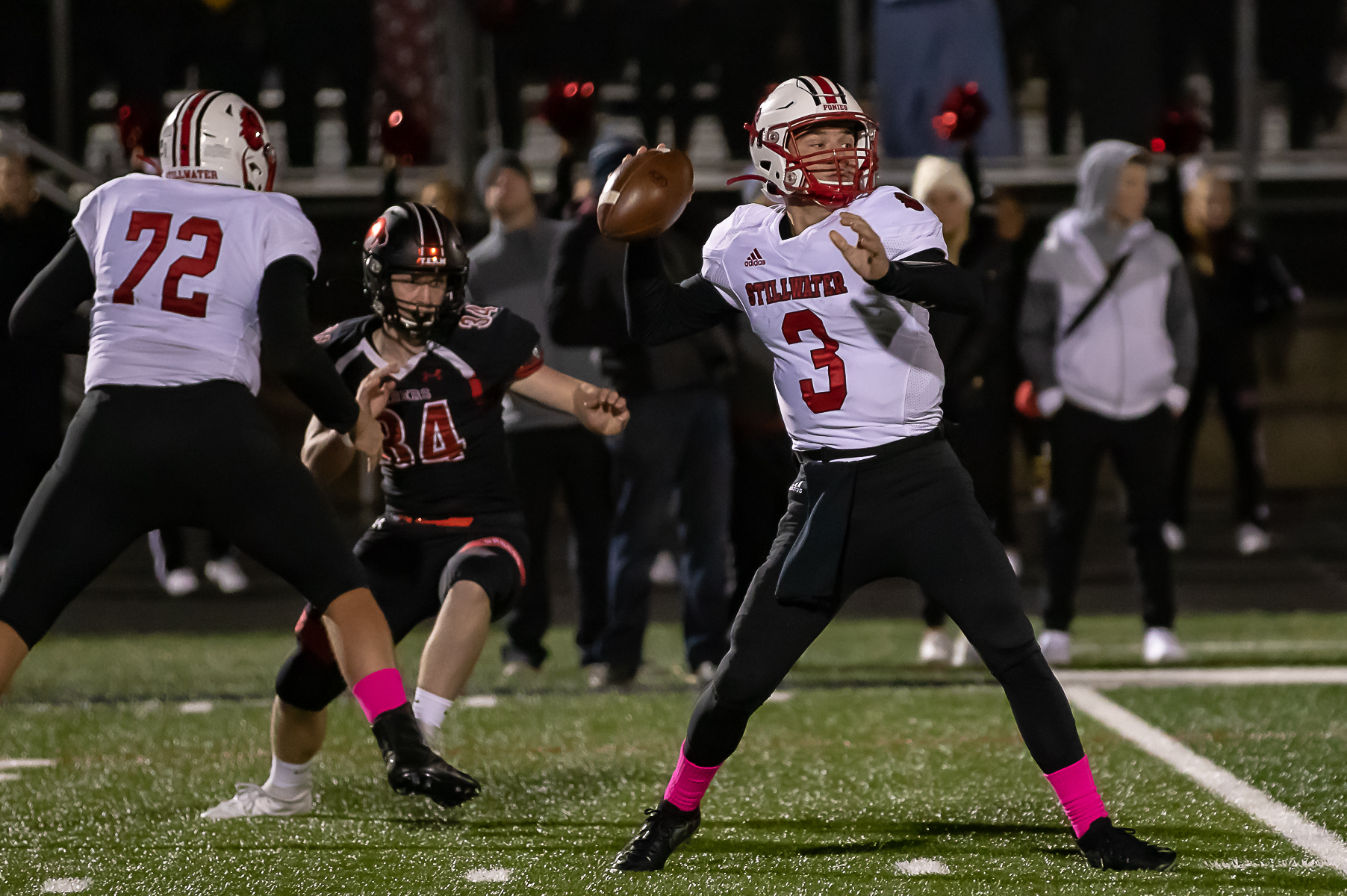