The Scarlets scored six touchdowns in the first half, then tacked on two more in the fourth quarter. 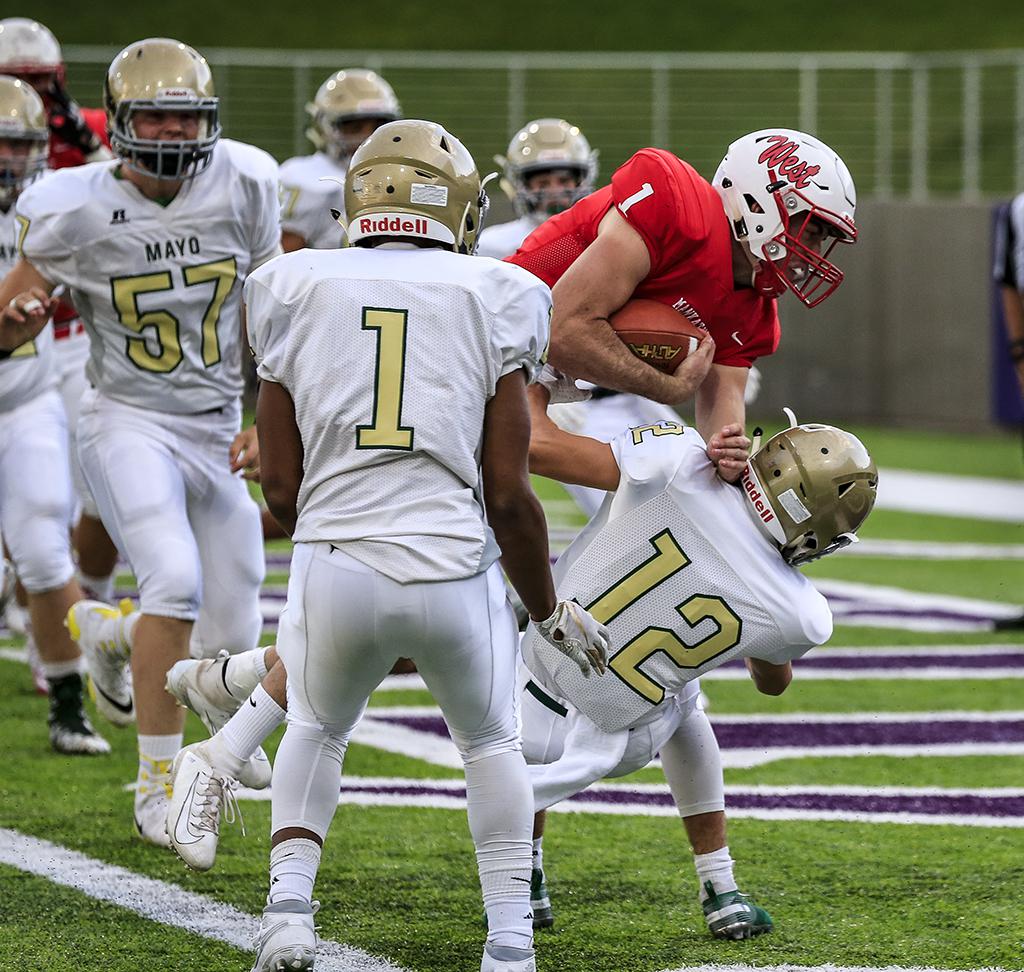 Mankato West quarterback Jack Foster gave his team an early 8-0 lead over Rochester Mayo after scoring a two-point conversion. Foster finished with 189 yards and five touchdowns, leading the Scarlets to a 58-21 win. Photo by Cheryl A. Myers, SportsEngine 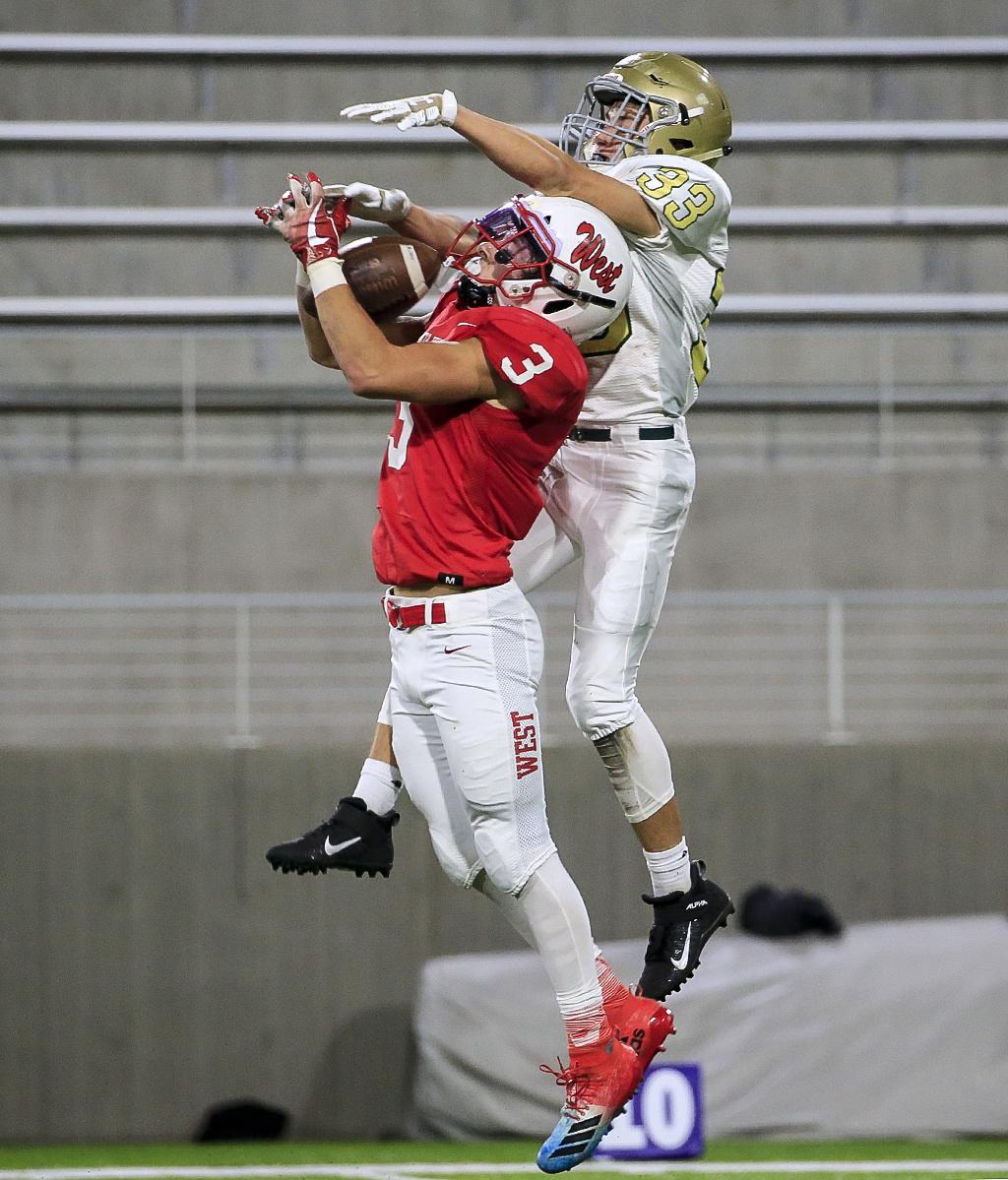 Big plays can be hard to come by and aren’t something that teams try to rely on. But when big plays beget bigger plays, good things happen.

So it went at TCO Stadium in Eagan on Saturday night, as Rochester Mayo (3-2, 2-2) and Mankato West came north to play at the Vikings’ training facility. Of the 11 touchdowns scored in 48 minutes of play, only three came on plays shorter than 15 yards. The Scarlets were dominant, scoring eight of those 11 TDs, as they dismantled their old rivals 58-21.

“We knew that [Rochester Mayo] was a good team,” Mankato West coach JJ Helget said. “The key to the game was to stop [quarterback Cade Sheehan] and keep him in the pocket. Our defense needed to make plays when he threw the ball up and we had a couple of big picks and we just let our athletes do the work on offense.” 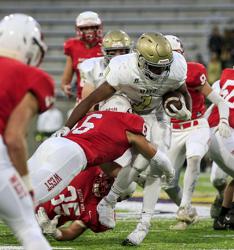 It was a special night for the Scarlets, designated as the home team on the neutral site, as ex-defensive coordinator and current Minnesota Gov. Tim Walz was in attendance to watch his old team take on the Spartans.

“This is a great opportunity to spotlight these teams,” Walz said. “Nights like tonight make me wish I was back on the sideline as a coach.”

The two teams traded punts in the first two drives of the game, something that wouldn’t happen again until the third quarter. Taking advantage of senior quarterback Jack Foster’s strong arm, it took the Scarlets just two plays to notch the first score of the game.

A play after hooking up with senior wide receiver Lucas Reid for a 29-yard gain, Foster hit sophomore wide receiver Mekhi Collins for a 35-yard score. A penalty on the Spartans turned into a two-point conversion run by Foster to give the Scarlets an 8-0 lead.

“The cornerback on me was a little small,” Collins said. “I took him deep and my quarterback threw me a great ball.”

The very next offensive play was the first big play of the game for Rochester Mayo. Asa Cummings, the game’s leading rusher with 124 yards on 16 carries, broke through some traffic along the far sideline and burst into open space for a 74-yard touchdown. One extra point later and it was an 8-7 game.

“We made the right adjustment and made the right call,” Rochester Mayo coach Donny Holcomb said. “He had a great run there and had a good first half.”

Foster got a rushing touchdown, a two-yard plunge after a lengthy drive, about a minute and a half before the end of the first quarter.

The second quarter turned into a scoring frenzy. After the 12 minutes of play had gone by, the two teams had combined for six touchdowns, four through the air and two from Mankato West’s kick return unit.

First, Foster connected with senior wide receiver Jon Sikel on a 40-yard TD pass. That led into a drive where Mayo dropped a 39-yard TD over the top of West’s defense. The Scarlets responded with an 80-yard kickoff return.

“We run a double-middle wedge and we’d been struggling with it,” Helget said. “When teams want to kick the ball to [Sikel] and Wyatt [Block], we’re happy. They are state-entrant sprinters, and they just made plays.”

The ensuing Mayo drive finished in a 6-yard TD pass from Sheehan to junior wide receiver Mason Greseth. The Scarlets again returned the kick to the house, this one a 70-yarder by Wyatt Block.

As it seemed the two teams would spend the remaining minute and a half of play trading haymakers, Mankato West’s defense picked off Sheehan on the Mayo 34-yard line. Just two plays later, Mekhi Collins, who had been the one to intercept Sheehan, caught a deep pass from Foster and waltzed into the end zone.

“That was my first career pick,” Collins said. “We practiced against their deep outs and when their wide receiver broke, I looked back at the quarterback and the ball was right there.”

In the span of 51 seconds, Mayo had gone from trailing by only six to trailing by 22, and it never recovered.

A scoreless third quarter where the teams traded lengthy possessions led into the final quarter, where Foster finished his day by completing touchdown passes of 10 and 39 yards to senior wide receiver Spencer Spaude and Sikel.

“We had too many mistakes today,” Holcomb said. “[Mankato] West deserves a lot of credit, they executed well tonight. They did a better job of covering our receivers than we had seen on film.”

Foster finished his day accounting for six of Mankato West’s eight TDs, five through the air and one on the ground. Sheehan, who struggled after the third touchdown, finished with 229 yards passing and two passing TDs. He also threw three interceptions that kept his team from mounting any kind of comeback.

“Sheehan is a gunslinger and he likes to let it rip,” Helget said. “We prepared our guys well for his style of play.” 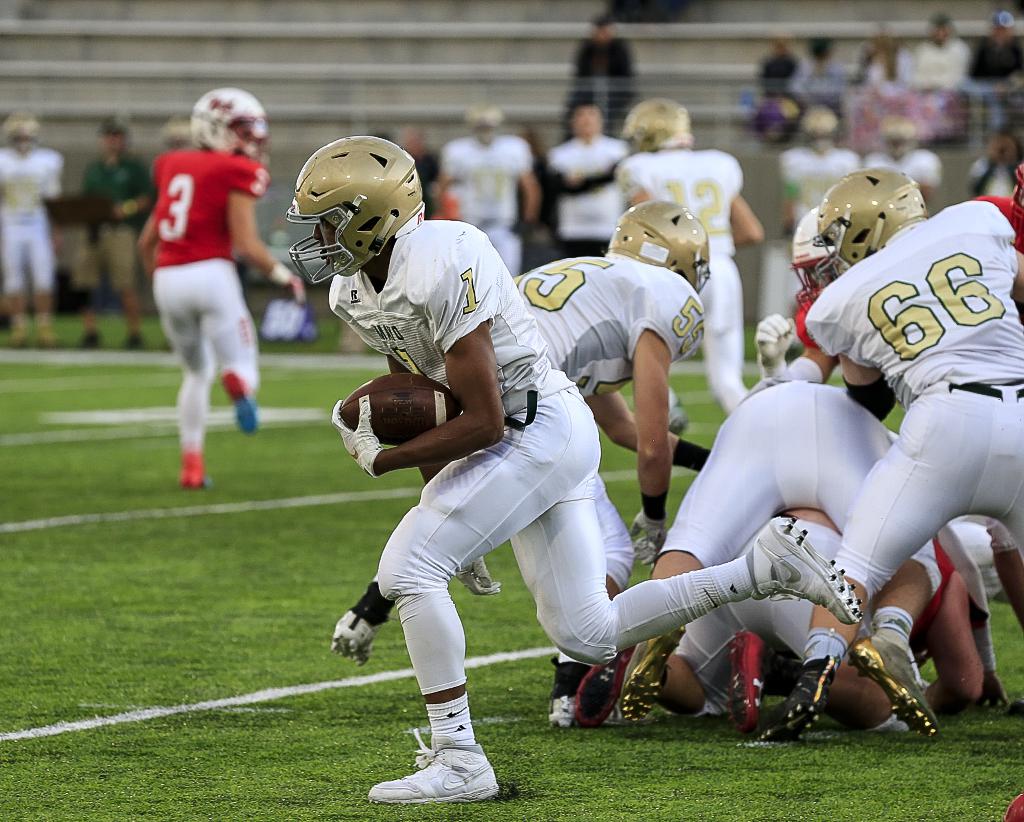 Rochester Mayo's offensive line opens up the field and Asa Cummings (1) heads for the end zone for a 74-yard rushing TD. Cummings finished with 124 yards on 16 carries. Photo by Cheryl A. Myers, SportsEngine

Under the bright lights of the Minnesota Vikings’ TCO Stadium, it was the big-play ability of Mankato West that stole the spotlight, as the Scarlets, ranked No. 8 in the Class 5A Associated Press’ poll, passed over, ran through, and simply demolished Rochester Mayo in a 58-21 drubbing Saturday night.

Wth ex-defensive coordinator and current Minnesota Gov. Tim Walz in attendance, the Scarlets scored six TDs in the first half and, after a quiet third quarter, sealed the win with two more scores in the fourth quarter. The Mankato West defense collected three interceptions.

Cade Sheehan, senior quarterback for Rochester Mayo (3-2, 2-2), connected 17 times on 33 passing attempts for 229 yards, including two TDs. Senior running back Asa Cummings assisted the offense, with 16 carries for 124 yards and a 74-yard TD that gave the Spartans their first score of the night.