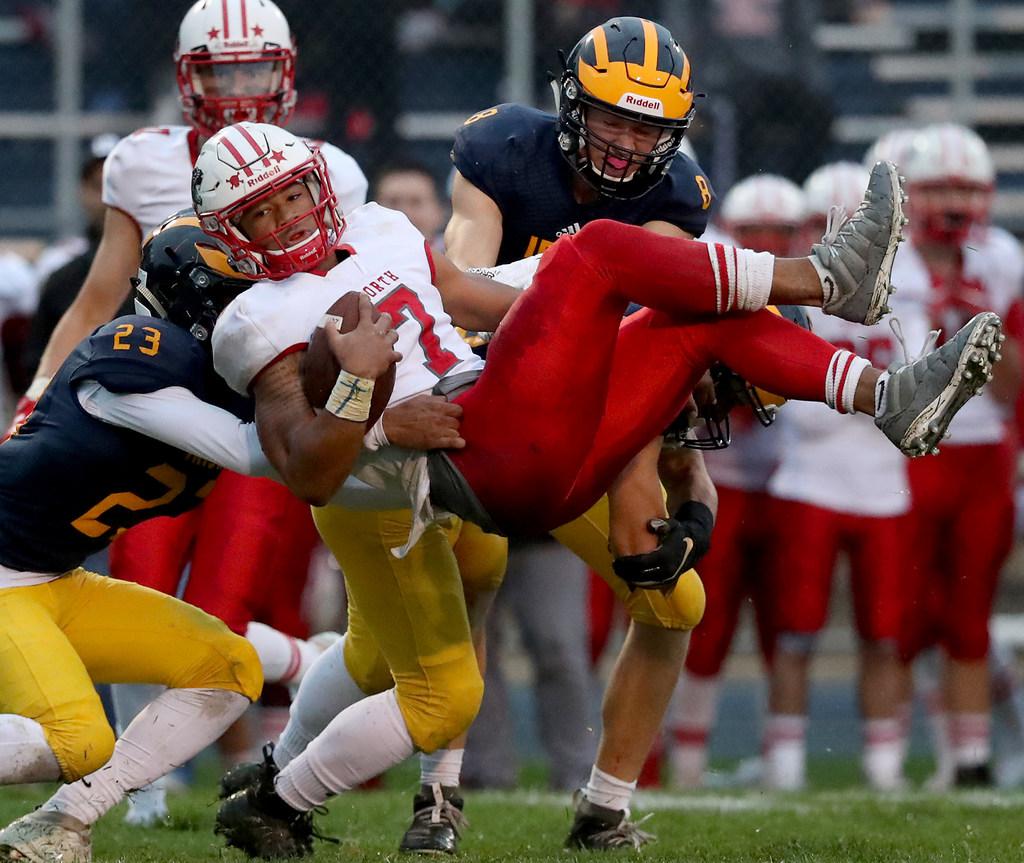 The surprise, Lakeville North coach Brian Vossen said, isn’t all the remarkable things senior RaJa Nelson can do. It’s that anyone doubts it.

Nelson, moved to quarterback before the season, rushed for a touchdown, passed for two more and even intercepted a pass to lead Lakeville North to a 20-3 victory at Rosemount on a wet, sloppy night.

“He’s tremendous,” Vossen said. “I think, more than anything, I’m surprised there’s any doubt whatsoever about what RaJa can do. He’s a remarkable player and he’s been the best athlete on the field, every field, for the last few years.”

Senior Keaton Mohs was on the receiving end of Lakeville North’s only two pass completions in the game, but both were second-half touchdowns of 26 and 9 yards. He’s also a believer in everything Nelson does.

“RaJa’s a stud,” he said. “You could put him at defensive end and he’d be our best defensive end. Anywhere you put him, he’s going to succeed.” 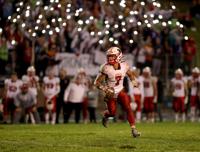 With field conditions making the ball difficult to handle and the natural grass field bogging things down, the first half was dominated by the defenses and characterized by mistakes.

Rosemount (1-2) didn’t get a first down on its first three possessions, but the Irish recovered a fumble at the Lakeville North 35-yard line and turned it into the game’s first points on Nathan Whiting’s 37-yard field goal early in the second quarter.

The Panthers (3-0) snatched the lead back soon after when Nelson broke free for a 64-yard touchdown. Halfway through the run, he appeared to be tackled but rolled off the defender and jogged the rest of the way into the end zone while stunned Rosemount defenders looked on.

The Nelson-to-Mohs connection provided the game’s only points in the second half.

Meanwhile, the Lakeville North defense was its typical ravenous self, feeding on Rosemount’s offense with a line that spent much of the game in the Irish backfield.

‘’Defense has always been the North way,” defensive end Landon Carter said. “Even if the offense takes some time to find a rhythm, the defense gets it going right away. It’s all about a mindset. That’s what we do.”

Afterward, Nelson shrugged off the superlatives tossed his way. Just another game.

“With the conditions and the team we were playing — they’re a really good team — I just wanted to be a positive leader for my team,” he said. “Our team builds off of that.”

No. 1-ranked Lakeville North rode the versatility of Raja Nelson to a 20-3 victory over Rosemount.

The Panthers, defending champions in Class 6A, struggled to establish any offensive consistency early and even trailed 3-0 in the second quarter Friday at Rosemount.

Nelson put the Panthers on top with a 64-yard scoring run in which he appeared to be tackled at about the Rosemount 30. But officials ruled he never touched the ground and Nelson jogged into the end zone for a 7-3 lead.

Nelson used his arm to boost the Lakeville North lead in the second half, hitting Keaton Mohs for touchdowns of 26 and nine yards.